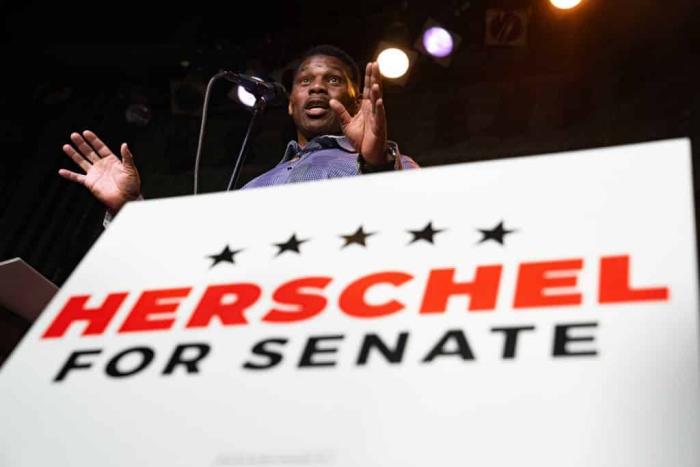 Herschel Walker Thinks You Should Have A Salad, Georgia

I missed the Warnock/Walker debate last week. Never fear, idiots always have something to say. And Herschel Walker has been making the media rounds while Georgia’s Senate race continues to look terrifyingly close. Early voting began yesterday. Please don’t screw this up, Georgia.

So Herschel Walker's new denial is that the money he sent didn't actually pay for an abortion because the recipient is "the mother of my child" and he just sent her money for mom stuff. The only problem is that the child in question was born years after the abortion. pic.twitter.com/1VdLnfLlW1

There’s a lot in that interview, and you can read more details here. One of the talking points Walker hit in his debate against Warnock, and doubled down on in this NBC interview, is his stance on the Inflation Reduction Act which, among other things, capped the cost of insulin. Walker has said that he would NOT have voted for the IRA and has explained that he thinks it’s more important that people eat right than it is to make life-saving insulin more affordable.

According to an American Diabetes Association 2018 study Approximately 1,013,358 people in Georgia, or 12.4% of the adult population, have diagnosed diabetes. And yesterday the journal Annals of Internal Medicine published research indicating that 16.5% of people who use insulin in the United States RATION their medication due to cost. But I’m sure if everyone just ate a few more salads every week they’d all be just fine.

Herschel Walker stands by saying insulin is "doing you no good" if you don't eat right, even though some people struggle with insulin production from birth:

"You still have to eat right. It doesn't matter … I have looked into it, and I have people that is on insulin." pic.twitter.com/ydtxRq060T

Last night, over on Fox News, Sean Hannity hosted Walker at a Town Hall event that included special guests Senators Tim Scott and Lindsey Graham. What. A. Party. Walker took the opportunity to question Reverend Raphael Warnock’s bona fides as a Christian and then argle bargled a bunch of other nonsense.

There’s only so far down the Fox News rabbit hole I was willing to go in order to find clips of this Town Hall. I feel like the significant lack of social media coverage by Fox News AND Hannity himself must mean something about the quality of the event.

yeah, I noticed this too. It's almost like Hannity invited Tim Scott and Lindsey Graham to take part in the "town hall" because he knows Walker is too limited to handle it on his own. https://t.co/TBGAFqlwxR

Polls are open in Georgia. Grab a bottle of water, two friends, and go get in line to vote. Please don’t allow this barely sentient pile of wet sweat socks to represent you in Washington.


← Reddit Asks the Question: 'Millennials, What Confuses You About Gen Z?' | Benson & Moorhead Return to Indie Sci-Fi with 'Something in the Dirt' →