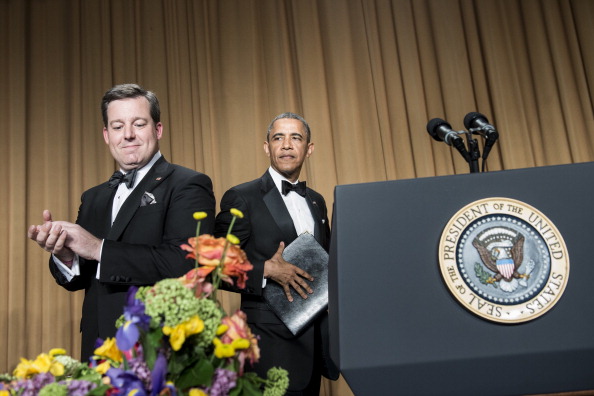 Fox News has been hit with a lawsuit over sexual misconduct allegations against some of its top personalities, including Tucker Carlson, Sean Hannity, and Howard Kurtz.

The most serious of the allegations involves a rape accusation against Fox’s former White House correspondent Ed Henry, who was fired by the network two weeks ago ahead of this lawsuit. Jennifer Eckhart, a former associate producer on Fox Business Network, alleges that, in 2017, Henry handcuffed her to a bed in a hotel room, took naked photographs of her, and forcefully raped her. In 2015, Eckhart alleges that Henry forced her to perform oral sex on him in a guest office at Fox News.

Eckhart further alleges that when Fox News conducted an investigation of the workplace in 2017 in the wake of the sexual assault accusations against Roger Ailes, Bill O’Reilly, and Bill Shine (for which Fox News paid millions in settlements) that the network ignored complaints from numerous women about Ed Henry.

Cathy Areu, a co-plaintiff in the case, is suing over hostile and toxic work environment. She also claims that Ed Henry sent her “a slew of widely inappropriate sexual images and messages.” She further claims that Sean Hannity threw $100 on the desk of his set and called for the men around to take her on a date for drinks, and that Tucker Carlson tried to see discern if Areu was interested in a sexual relationship by informing her that he would be alone in his hotel room in New York City. She also alleges that Howard Kurtz tried to get her to go to his hotel room, as well.

Ed Henry denies the allegations through his attorney, although Fox News has already fired him. The network, however, calls the allegations against the other men “false, patently frivolous and utterly devoid of any merit,” based on its internal investigation by an outside firm. Of course, there’s plenty of evidence in Fox’s history to support the allegations about the culture of Fox News, although much of it is tied up by NDAs.

Tucker Carlson, meanwhile, returned from his vacation last night, and while he did not address the lawsuit, or the writer of his who was fired over racist comments two weeks ago, Carlson did intentionally dox a NYTimes reporter, a photographer, and several others at the paper and provoke his viewers to harass them on social media based on a bad-faith argument that the Times was about to dox him. That is untrue, and Carlson knows it. He’s simply punishing reporters for daring to write negatively about him.

.@nytimes does not plan to publish Tucker Carlson's residence, which Carlson was aware of before his broadcast tonight. pic.twitter.com/npg93Cdmbm

The Times story, by the way, is apparently about Tucker Carlson’s decision to spend more time in Woodstock, Maine, which has been reported numerous times in Maine local media, which I know because I flinch every time I read that Carlson is inhabiting the same state that I am in.

(Look at the way Obama was looking at Ed Henry in the header photo. He knew.)


← 'St. Louis Ken And Karen' McCloskey Each Charged With Felony Unlawful Use Of A Weapon | 'Utterly Damning': The UK's Russia Report Is Finally Published →