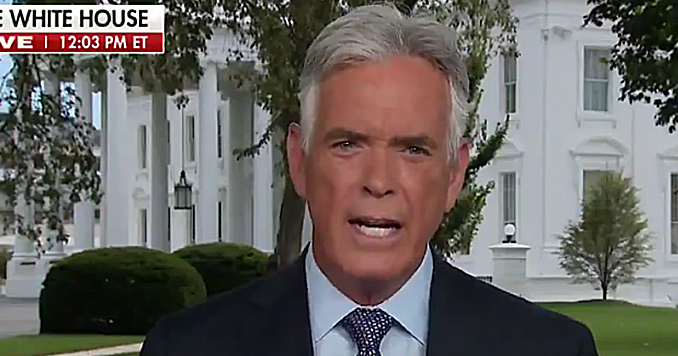 Without spoiling it, there’s a moment in this season of The Boys, where it appears that Homelander — an evil, cruel, murdering piece of sh*t — might actually draw the line at Naziism. “Well, sure, I’ll kill people for fun,” I imagined Homelander was about to say, “but I’m not racist.”

Alas, Homelander didn’t draw that line, but it appears that some of the anchors over on Fox News might want to draw a line in the vicinity of white supremacy. Dog whistles are OK and all, but overt racism? GASP! I mean, sure, they promoted Trump’s campaign in 2016, have supported him like a state-run network since, and have consistently enabled his ability to lie and spread misinformation. But listen: Fox News draws the line at overt, speaking-out-loud white supremacy, or so they would have us believe.

In fact, the last couple of days, Brian Kilmeade on Fox and Friends has taken issue with the fact that Trump hasn’t condemned white supremacy, taking the shocked tone of a toddler who just discovered that his dad loves to kick puppies. This was yesterday.

Brian Kilmeade: "Donald Trump ruined the biggest layup in the history of debates by not condemning white supremists. I don't know if he didn't hear it, but he's gotta clarify that right away. … Why the president didn't just knock it out of the park, I'm not sure." pic.twitter.com/Qo52jBDTPl

This was this morning.

Brian Kilmeade: "[Trump] would do himself a solid and do his party a solid to take some time today to clarify about his white supremist statement. Whether it was the franticness of the night, but a lot of people are forced to explain it today that have other things to do." pic.twitter.com/AQ0TAyFTOj

Meanwhile, earlier today White House Press Secretary Kayleigh McEnany lied repeatedly during a trainwreck of a press conference. She said that Amy Coney Barrett was a Rhodes Scholar (she is not; she attended Rhodes College in Tennessee); she stumbled when trying to come up with evidence to support Trump’s claims of voter fraud; she whiffed when Fox’s John Roberts also asked why Trump hasn’t specifically condemned white supremacists.

McEnany dodges and deflects (WHY? WHY? IT’S SUCH AN EASY ANSWER), but afterward, Trump supporters went after John Roberts on social media for even asking the question, which really pissed him off, as can be seen here.

With ZERO fucks left to give — Fox News’ John Roberts was enraged after the White House press briefing on Thursday in which Kayleigh McEnany refused to denounce white supremacy, or explain why Trump refuses to do so.pic.twitter.com/TFjPm3tLLg

See the shocked, mildly uncomfortable look on the Karen anchor’s face? Yikes. Roberts is finally experiencing a feeling that millions of people before him have experienced, namely the feeling of being rejected by his own people for trying to do the right thing.