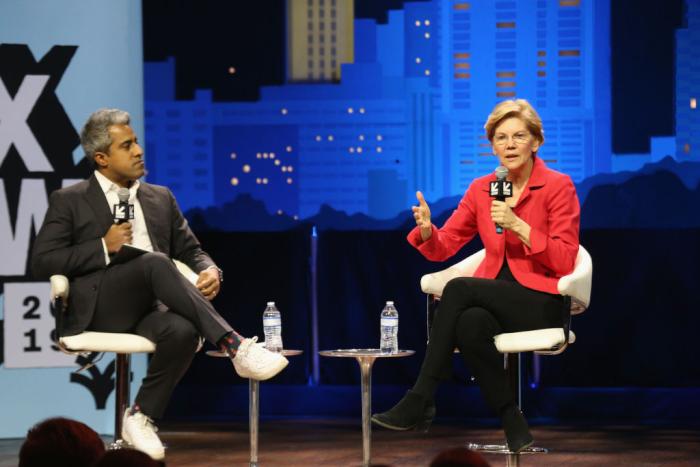 The momentum of the Bernie Sanders campaign is formidable, and undeniable. It’s also not surprising. Not to the nationwide, multi-generational, multi-ethnic coalition of organisers, supporters, and volunteers who are making it the incredible success that it is. On the ground, amongst ordinary people, the kind of passion that Sanders inspires is powerfully obvious. To people on one side of the class divide in America, the electoral victories that Sanders is amassing make sense.

A nice side effect of those victories is the spotlight they are shining on that class divide; specifically on the gulf that exists between the millions of ordinary citizens on one side, and the mainstream capitalist media on the other. Because you would think that the Sanders phenomenon—a relatively radically progressive social democrat looking like a serious contender for President of the United States while openly speaking the language of class consciousness and working class solidarity, all the while bearing a record that backs up his words—might inspire some introspection in a healthy media landscape.

But of course, America doesn’t have a healthy media landscape. What is has is a series of big business mouthpieces masquerading as news networks that pump out a ceaseless tide of propaganda aimed at perpetuating the capitalist status quo. Pretending to encourage ideological diversity and debate, what they actually do is stifle it. In a healthy media environment, Bernie Sanders’ campaign would encourage news networks and the pundit class to at least attempt to engage with the ideas and the politics being brought to the surface by the millions of people responding to that campaign. In America, it means the opposite. It leads to derangement like this from MSNBC’s Chris Matthews:

Why does MSNBC equate the caucus win of a Jewish candidate who had family killed in the Holocaust to a literal Nazi invasion? https://t.co/6VNejZsMTq

It’s like in cartoons, when a character is electrocuted, and the frames alternate between its visible surface layers and the skeleton underneath. Look, the skeleton:

MSNBC is owned by NBCUniversal, which is a subsidiary of Comcast.

Comcast has $250 billion in assets with $11 billion in profit last year.

Comcast will be taxed in the billion-dollar range if Bernie is president.

Comcast will use MSNBC to fracture democrats and re-elect Trump. pic.twitter.com/Pc3pTVRJH1

No surprises there, right? We know why the individuals at the forefront of this system behave the way they do. The pundit class is at best out of touch with the majority of working class America, and at worst actively complicit in its exploitation. The more steam Bernie Sanders’ campaign gathers, the more deranged in their attacks they’ll get. Nevertheless it’s depressing to see.

Which is why any deviation from that line is always a nice break. Like this bit from Anand Giridharadas. Giridharadas is a former columnist for The New York Times and author of ‘Winners Take All: The Elite Charade of Changing the World’. I’ve had my disagreements with some of his takes on American politics, but there’s no denying he has a way of expressing things succinctly and evocatively. Here he is responding to that Matthews madness:

"I've been encouraged watching you on air talk about your own rethinking of things…You know, I think this is a wake up moment for the American power establishment…Many in this establishment are behaving…like out of touch aristocrats in a dying aristocracy" @AnandWrites 🔥 pic.twitter.com/kxxe3JR3tc

I think this is a wake up moment for the American power establishment. From Michael Bloomberg to those of us in the media, to the Democratic Party to donors, to CEOs—many in this establishment are behaving, in my view—as they face the prospect of a Bernie Sanders nomination—like out-of-touch aristocrats in a dying aristocracy. There’s a sort of ‘How do we stop this?’, ‘How do we block this?’, and there is no curiosity; a ‘Why is this happening?’, ‘What is going on in the lives of my fellow citizens in this country that they may be voting for something that I find so hard to understand—what is happening?’

This is a moment for curiosity in America. I think about this network, which I love, which you love, and I think we have to look within also—why is a lobbyist for Uber and Mark Zuckerberg on the air many nights explaining the political revolution to us? Why is Chris Matthews on air talking about the victory of Bernie Sanders—who had kin murdered in the Holocaust—analogising it to the Nazi conquest of France? The people who are stuck in the old way of thinking—in the 20th century frameworks, in gulag thinking, are missing what is going on and there’s a time for all of us to step up, re-think, and understand the dawn of what may be frankly a new era in American life.

Yes, I do wonder why in this situation there is no introspection on behalf of these very well paid pundits fronting the news agencies of billionaires. What do you think, Upton?

It is difficult to get a man to understand something, when his salary depends on his not understanding it.

Ah we know what you think.

← Harvey Weinstein is a Convicted Rapist. His Legacy is Shot. He's Going to Prison. It's a Start. | 'Last Week Tonight' Exposes The Lethal Levels Of Islamophobia In India →