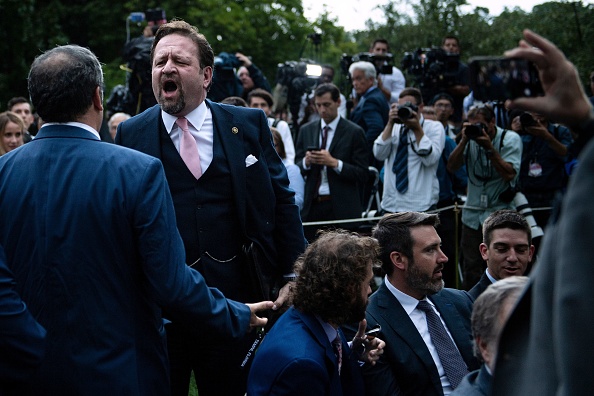 I’m not sure what everyone else anticipated when Donald Trump said that he was going to be holding a “social media summit” yesterday, but I suspected that he’d be meeting with social media leaders from the likes of Google, Facebook, and Twitter to make efforts to work the refs, so to speak.

That’s not what his social media summit was all about, although because the guest list was withheld, the press didn’t know that until it started. The people who attended were not from Facebook or Twitter, they were right-wing Facebook and Twitter users, like Bill Mitchell — a man so dumb he believes that even Trump’s biggest failures are all part of a game of 3D chess — Sebastian Gorka, and someone called Carpe Donktum. It was his meme army, conspiracy theorists, his retweeters, his trolls.

And what did he talk about? His grievances with social media, the fact that his follower count doesn’t increase at the same speed that it once did even though he is “hotter” than ever, and the fact that his Tweets don’t take off like they once did. He believes it’s a social media conspiracy. Everyone else knows that it’s Trump fatigue.

Trump has waxed for several minutes about the effectiveness of his own Twitter account: "Putting it out is like an explosion on CNN, on crazy MSNBC," he says, reflecting on his newsmaking tweets.

He also questions why his tweets aren't rocketshipping like they used to.

This event is actually an incredible view into one of the hallmarks of this presidency: how he tweets.

So, the President of the United States sends out a tweet and then stares at his phone to see how many retweets he gets?

We also learned that he hates houseflies.

Meanwhile, after the social media summit, Trump held a news conference out in the Rose Garden, where he let his social media followers mix with the real journalists. The result is about you might have expected:

… in the rose garden of the @whitehouse, @sebgorka just screamed at journalist @briankarem calling him a "punk." then someone remarked that gorka could "kick your punk ass."

again, this happened… in the rose garden.
vid from @katierogers pic.twitter.com/F88NX4lWk7

And about that fight? The President has weighed in, siding with a known white supremacist.

As for the press conference itself, Trump announced that he was backing off of his efforts to insert a citizenship question into the census, avoiding a Constitutional crisis that might have arisen had he defied a Supreme Court ruling. Of course, Trump tried to characterize it as a win instead of a clear defeat for his Administration, stating that he would, instead, compile citizenship information based on existing federal records.

— In other news, after Paul Ryan insulted Donald Trump for his ignorance of how government works in a book yesterday, Trump’s response was predictable:

Paul Ryan, the failed V.P. candidate & former Speaker of the House, whose record of achievement was atrocious (except during my first two years as President), ultimately became a long running lame duck failure, leaving his Party in the lurch both as a fundraiser & leader……

….When Mitt chose Paul I told people that’s the end of that Presidential run. He quit Congress because he didn’t know how to Win. They gave me standing O’s in the Great State of Wisconsin, & booed him off the stage. He promised me the Wall, & failed (happening anyway!)……

….He had the Majority & blew it away with his poor leadership and bad timing. Never knew how to go after the Dems like they go after us. Couldn’t get him out of Congress fast enough!

One more note on the social media summit. During it, he said that the mainstream media was not covering “big beautiful stories”, like his efforts to combat kidney disease this week, saying that it was political bias. Well, folks, here’s Trump on combatting kidney disease:

TRUMP: "You've worked so hard on the kidney. Very special — the kidney has a very special place in the heart. It's an incredible thing." pic.twitter.com/JLM3uCsO5u

The kidney has a very special place in the heart, indeed.


← It's Megan Rapinoe's World, Ben Shapiro, And You're Just Living In It | One Online Platform, Netflix, Takes On Another, Facebook, in 'The Great Hack' →