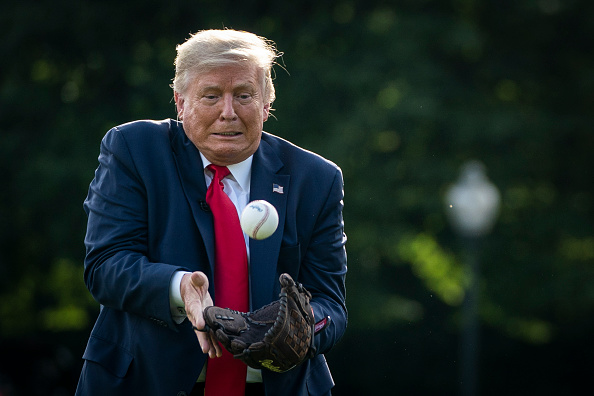 Donald Trump's Petulance May Be a Huge Gift to Democrats ... ?

Good morning. There are 22 days until the inauguration. On his way out, however, an angry, petulant, and brooding Donald Trump may be giving the Democrats (and America) a gift, in either the form of $2,000 checks or maybe even a Senate Majority for the Democrats.

If you’ve not been keeping up, here’s the situation as it stands: Last week, Trump threw a fit and refused to sign the stimulus bill because he was upset that Senate Republicans stopped backing his efforts to overturn the election. Over the weekend, Trump threatened to blow up the stimulus bill by demanding direct payments be increased to $2,000 instead of the $600 in the current bill. Why did he do this? Again, in part to punish Republicans for their lack of fealty, and in part, because money doesn’t mean anything to Donald Trump.

Senate Republicans hate this idea because of “fiscal conservatism,” which is code for, “We don’t want rich people to have to pay for the very stimulus designed to improve the economy, which itself makes the rich people richer.” But Trump put the Senate GOP in quite the predicament by demanding the $2,000 because yesterday the House Republicans voted — by a two-thirds margin (with 44 Republicans joining all the Democrats) — to approve of the $2,000.

Now it’s Mitch McConnell’s call. He obviously doesn’t want the $2,000 stimulus payments (because, again, austerity), but the President wants it, the House passed it, Senate Democrats want it, and even a few Senate Republicans (like Marco Rubio) have signaled that they would approve of the $2,000 payments. Democratic voters want it, and most Trump voters want the checks, too. Normally, Mitch McConnell would just ignore all of this, refuse to bring it to the floor, and hope that it will quietly go away.

However, this is not going to go away quietly, because meanwhile, there’s a Defense bill that Trump has vetoed designed to give the military their raises and other benefits. Trump vetoed it because Twitter hurt his feelings, and he wants to nullify Section 230 of the Communications Decency Act. There’s no agreement on this in Congress, while everyone agrees that the soldiers should get their raises, so the plan was to simply override the President’s veto, the first override of his Presidency, and pass the Defense bill.

However, now Senators Bernie Sanders and Ed Markey are threatening to refuse to vote to override unless Mitch McConnell brings the $2,000 check bill to the floor for a vote. And what would a vote do? It would force the Republicans in the Senate to choose between the fiscal conservatism they claim to believe in or their loyalty to Donald Trump. It’s kind of a no-win situation because the Republican party itself is split on this issue.

It’s kind of a great holiday gift from Trump: We either get $2,000, or we get Senate control, and then $2,000. The latter would be even better, to be honest, because a Senate controlled by Democrats would then make billionaires pay for the $2,000 checks instead of just tacking it onto a tab that future generations will have to pick up.

All of which is to say: There’s a possibility that the New Year could begin with a new President, a new Majority Leader, and $2,000 in our pockets. Thanks, Trump?