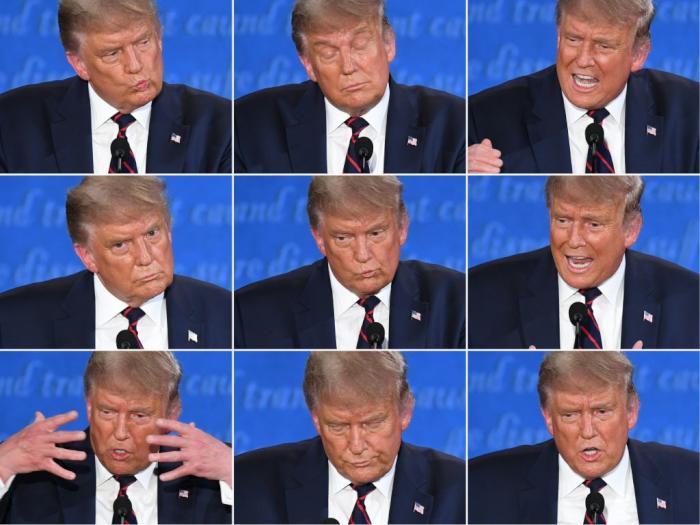 There’s not much to say about the content of last night’s debate. I heard not only the prim Dana Bash call it a “shitshow” on CNN, but the host of the NYTimes “The Daily” podcast also call it a “shitshow,” in quoting a text from his own mother. That’s exactly what it was: Donald Trump, unsurprisingly, decided to ignore the rules of the debate and ignore all decorum and spend the entire night talking over and interrupting both Joe Biden and the moderator, Chris Wallace, who got a lot of sh*t for not handling the debate well, but I’m not sure there’s anything he could have done to shut the President up.

Trump wanted to bait Biden into losing his temper by getting personal, repeatedly mentioning Hunter Biden (even in an exchange about the late Beau Biden), and Biden mostly didn’t take the bait.

He did tell the President to shut up a couple of times, and he did call the President a “clown,” which is the thing that one independent voter in Ohio said turned him against Biden, because Biden apparently disrespected the office of the Presidency. I’m not kidding, either. You see a debate like this, and you check your echo chambers on social media, and you see even the pundit class going off on Trump, and you think, “Oh, well. Trump just shot himself in the foot, then raised the gun and ate it,” and then you see some independent voter in Ohio watch the same debate the rest of us saw and say, out loud, on television, “Well, I don’t know. I just don’t know.” Democracy is amazing until you realize who is actually filling out those ballots. I’m sort of with QS here:

David Brooks has faith in the voters, though. (F*ck you, David Brooks).

I’m the most horrified I’ve been in my career as a political journalist and the most relieved. This election won’t be close. Have faith in the American people!

Still, reason did prevail, at least based on the polls.

The CNN poll was even better for Biden.

Who won the debate?

The punditry, at least on CNN and MSNBC, was at least a little satisfying, too.

Anderson Cooper: "I don't think we've ever seen a president of the United States completely lacking in shame. Just shameless. And immoral — there's not a moral fiber in this man … you can not have watched that debate and be proud of our president." pic.twitter.com/FRlMIwfydg

.@jaketapper “That was a hot mess. A dumpster fire inside a train wreck… a disgrace .. primarily because of President Trump.” @DanaBashCNN: “That was a shitshow.”

Again, not that these polls matter that much, and I’m not even sure that the debate itself will change that many minds, despite the fact that the President refused to condemn white supremacists and, in fact, gave the Proud Boys a new slogan:

The Proud Boys on Telegram have now posted an image with its logo and Trump's remark. https://t.co/xSySGrohcm pic.twitter.com/UAJFsKCsbX

“Outside of the debate, Proud Boys leader Joe Biggs saw Trump’s remarks as permission to ’ fuck up’ the group’s foes.
‘Trump basically said to go fuck them up!’ Biggs wrote on Parler, an alternative social media network that courts conservatives. ‘This makes me so happy.’”

Trump also, again, refused to say that he’d peacefully hand over the office if he loses, although Biden was good at least about saying that it’s not Trump’s decision to make. This, from Maddow, was probably the most on-point quote of the night:

.@maddow: "He is not participating in a re-election campaign. He is arguing that he should stay in office and the election should be negated. He treated the debate that way with a monstrous, just cavalcade of increasingly wild and obscene lies."

It’s the voters’ decision. Allowing the voters to decide the winner is the thing that Trump is so clearly terrified of. Lashing out, being petulant, and interrupting is his personality, but it also reflects a deep, deep sense of insecurity about an election, where he is down significantly in national polls and in the swing states. Being an asshole is all he has, and that’s enough for the Breitbart crowd (and Megyn Kelly), but it’s not enough to win an election, and Trump knows what the consequences of losing are for him. He won’t be protected anymore. Banks can call in their loans. Prosecutors can file their charges. Does a former President still get Secret Service protection in prison?

We may soon find out.

When you remember that @JoeBiden is a stutterer making his voice heard while being bullied and shouted at, this is a remarkable example of grace under fire.


Trump is showing us what it’s like to be in an abusive relationship with a psychopath. Imagine him acting like that at home with someone in his family. Maybe that’s why they all became mini-me psychos.

Trump interrupted Biden and the moderator 128 times in 90 minutes.

Politics aside, if any other American were on national TV bum-rushing a parent as they talked about a vet son having died of cancer, they'd be fired the next morning.