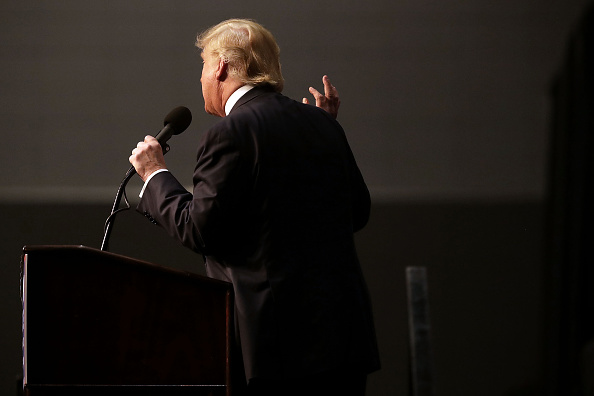 Last night, the House of Representatives voted to impeach the President of the United States. Regardless of how this eventually works itself out, there are a few things worth noting here: He’s only the third President to be impeached (and the first in his first term). That will forever stain him. One hundred years for now, if the human race still exists (God willing), the pub trivia questions on Donald Trump will be, “Which Presidents have been impeached?” and “Name the President who defied science and hastened the destruction of the Earth’s natural environment?” What a legacy!

Second of all, it was the first time in Trump’s Presidency that he was held accountable for anything.

This is the first time -if you don’t count 2018 -Donald Trump has suffered poltical consequences for his actions.

- not for denigrating a gold star family
- not for encouraging his supporters to punch protestors at rallies
- not for blatantly hawking his properties while campaigning.
- not for accusing his opponent’s father of helping to kill JFK
- not for insulting that candidates wife.

- not for profiting off the presidency
- not for filling his cabinet with people who abused tax payer money
- not for undermining American Intel.
- not for lying about dumb things like crowd sizes or big things like Obama wiretapping him.
- not for anything …

He’s now only the third president in American history to be impeached.

No matter what happens next, even if the Senate acquits him, even if he is re-elected, he will forever have an asterisk next to his name.

And finally, this accountability — this ability to add an asterisk to Trump’s name — would not have been possible without the tireless efforts of those who took back the House for the Democrats in 2018. There are days when it feels like nothing matters, that no matter what we do, nothing will change. But President Trump was impeached because enough people in 2018 insisted we reclaim the country for ourselves.

This is what the Dems are dealing with. Does anyone think this is good for the USA! https://t.co/rvY3mDo69r

We just gotta do it again next year.

In the meantime, Trump was holding a rally as he was being impeached last night, and he lost it, folks. Daniel Dale tracks his every rally (and fact checks the President), and here are some choice moments from his unhinged, shit show of a rally:

I missed this earlier: Trump called for the impeachment of no-longer-president Barack Obama over his Obamacare "keep your doctor" comments ("I think we should impeach him for that. Let’s impeach him"), and suggested Obama should've been impeached for payments to Iran.

Trump on, I think but am not sure, the inspector general: "He's hit the golden pond." Is that a phrase?

Trump on his effort to rescind energy efficiency regulations for light bulbs: "Why do I always look so orange? You know why? Because of the new light. They're terrible."

Trump says that you used to press a dishwasher once and it was an "explosion" and five minutes later steam would come out. "Now you press it 12 times. Women tell me."

The president: "Sinks. Showers. And what goes with a sink and a shower?" Crowd: "TOILETS!" The president: "Ten times. Right? Ten times." He adds, "Not me, of course, not me. But you."

Most notably, Trump suggested that the late Michigan Representative John Dingell was looking up from hell, after his widow voted to impeach Trump.

Here's the transcript of President Donald Trump's comments about how Rep. Debbie Dingell betrayed him by voting for impeachment even after he gave her late husband Rep. John Dingell, who may be down in hell, "the A+" post-death treatment, not "the C or the D." pic.twitter.com/vWIXLqqIz3

To his credit, he’s managed to make the Dingle story a bigger part of this morning’s news cycle than impeachment.

JUST NOW: "It is still something I am really grieving over. This Thanksgiving was hard. Christmas will be even harder. And I'm going to go back to doing my job "@RepDebDingell on @realDonaldTrump's base attack on her late husband.@NewDay pic.twitter.com/oqaG60Xnnq

But folks: He is not handling this well. At all. He apparently won’t even walk past Richard Nixon’s portrait in the White House because it depresses him too much.

Andrew Johnson handled it better, and he was a sadistic demagogue who ran around the country giving speeches to crazed crowds justifying violence as a rational response to minorities trying to steal the country with their demands for equal citizenship.

And here’s what’s bound to make Trump even angrier: Nancy Pelosi is wisely hanging on to those Articles of Impeachment, and she won’t walk them over to the Senate until she knows she’ll get a fair trial.

Speaker Nancy Pelosi indicated Wednesday night that the House could indefinitely delay sending the articles of impeachment against President Trump to the Senate, leaving ambiguous the timing of a trial to decide whether to acquit him or convict and remove him from office.

There is even some talk that she hangs onto them forever, which I think may be the smartest thing to do here. It gives the Democrats a win in impeaching Trump, but it deprives Republicans of the ability to acquit him. There’s no way that the Senate votes to convict Trump, so why bother? And you know this bothers Trump immensely because he’s already railing about it.

I got Impeached last night without one Republican vote being cast with the Do Nothing Dems on their continuation of the greatest Witch Hunt in American history. Now the Do Nothing Party want to Do Nothing with the Articles & not deliver them to the Senate, but it’s Senate’s call!

“The Senate shall set the time and place of the trial.” If the Do Nothing Democrats decide, in their great wisdom, not to show up, they would lose by Default! 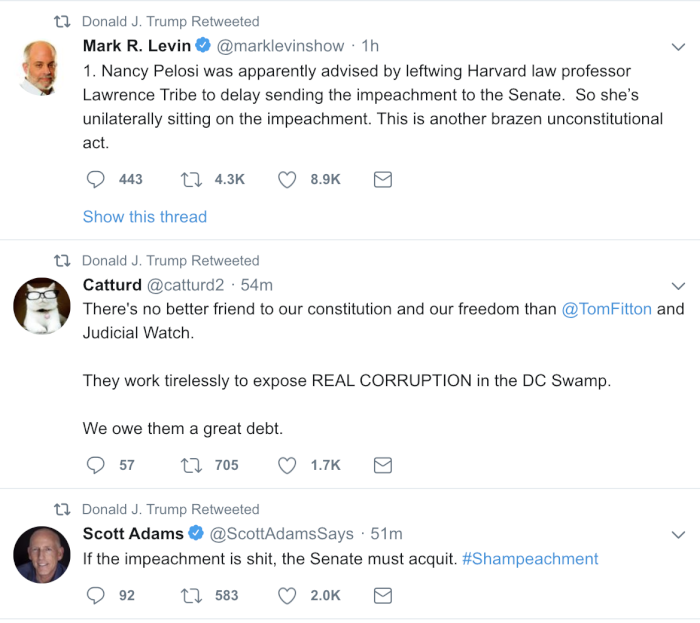 Nothing may ever come of this impeachment, but I am going to enjoy the hell out of how much Trump hates it, and how he will always be President Impeachment.

Occam’s Razor Time: Bear with me now—maybe, just maybe, Trump is a ruthless-but-not-bright, needy, sociopathic grifter and lifelong cheater with the impulse control of three-year-old who wants to be a white supremacist dictator.

Because, well, that seems to better fit the facts https://t.co/gIzufUmytT


← Here Are the Identities of All the S2 'The Masked Singer' Celebrities, Including the Winner | 'Harry Potter' Author J.K. Rowling Supports Maya Forstate On Twitter, Comes Out As A TERF →