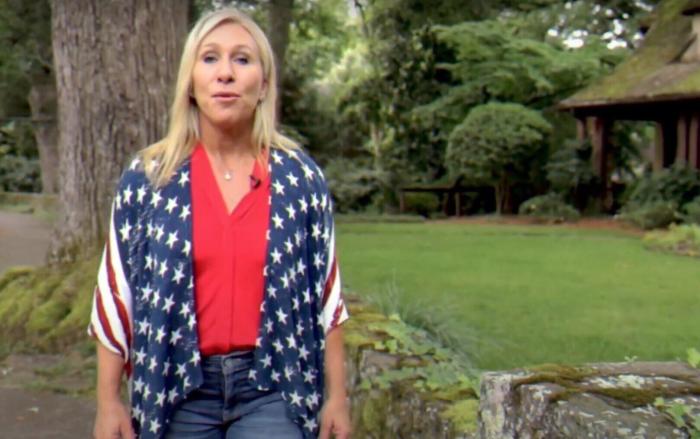 Donald Trump and the GOP Welcome an Openly Racist, Anti-Semitic QAnon Conspiracy Theorist as the 'Future' of the Party

Two years ago, when I wrote about the QAnon conspiracy theory, it was with the explicit understanding that this was fringe bullsh*t. At the time, its biggest promoter was Roseanne Barr. I have no f**king idea where the QAnon conspiracy stands today, but two years ago, it was believed that the Robert Mueller was actually working with Donald Trump to take down Bill and Hillary Clinton and a slew of other celebrities they associated with the Pizzagate child sex rings. Epstein was involved, and the QAnon people were behind some of the biggest conspiracies about the Clintons murdering Epstein, although when Trump wished Ghislaine Maxwell well, the QAnon bubble burst temporarily, until they found a way to absorb that into the narrative, too. The QAnon theory is something along the lines of Trump promising to pardon Maxwell in exchange for testimony indicting the Clintons, etc.

It’s total crackpottery. Just up-and-down nonsense, so much so that TikTok has banned QAnon hashtags, although Facebook has not. Facebook has three million (3 MILLION) QAnon users and Zuckerberg is making money off of their ads. Lately, the wingnuts on Fox News — like Sean Hannity and Jesse Waters — have started promoting some QAnon theories, as we head toward an election where social media will no doubt once again be a soup of misinformation.


Congratulations to future Republican Star Marjorie Taylor Greene on a big Congressional primary win in Georgia against a very tough and smart opponent. Marjorie is strong on everything and never gives up - a real WINNER!


For the record, here are a few things that Marjorie Taylor Greene believes: That Black people are “slaves to the Democratic party,” that Muslims should not be allowed to run for office, and that George Soros orchestrated the Las Vegas shooting as a false-flag effort to promote gun reform. “George Soros is the piece of crap that turned in — he’s a Jew — he turned in his own people over to the Nazis,” she once said. She also believes that white men are the most mistreated group in the country. “Guess what? Slavery is over,” she once said. “Black people have equal rights.”

Some Republicans have condemned her statements and backed her opponent — a neurosurgeon — but others have also congratulated her on her victory, apparently happy to welcome her to the GOP. Unfortunately, even if we manage to defeat Trump in November, it will be a very long time — if ever — before we are rid of people like her.


← It Sure Didn't Take Long for the Racist Nonsense to Start, Did It? | Sarah Cooper Guest Hosting 'Jimmy Kimmel: Live' Is the Feel-Good Story We Need →