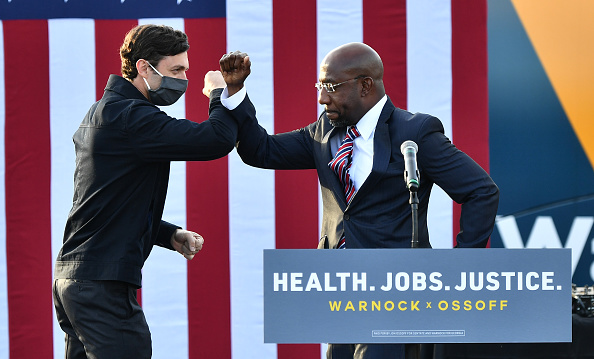 Today is that Georgia runoff, and I am very much like the Biden transition: Hoping for the best, but bracing for defeat. Despite everything that’s gone on in Georgia (including that damning phone call), the GOP is really good at turning out the vote in these runoff elections, Georgia is still slightly more red than blue, and Stacey Abrams can only do so much.

Privately, Biden’s team does not expect to win the races, according to Democratic officials, but they are more optimistic about their chances than they were weeks ago. Though the president-elect narrowly won the state in November, they attribute that to a powerful anti-Trump sentiment that did not translate down the ballot. Perdue received about 88,000 more votes than Ossoff, and the top two Republicans combined got more than 636,000 votes than Warnock in the special election.

I am hopeful — 75,000 new voters registered for the runoff, half of which were under 35 — but also cognizant of the fact that on the night of November 3rd, we were very unsure of Biden’s victory, and it looked at the time like the Democrats had no chance in hell of winning the Senate. This, at least, is a chance. The Daily podcast has been covering the race for the last two days, talking to voters there, and I can only listen to a few minutes of it before my anxiety about America takes hold — way too many people believe everything that Trump says, and way too many people believe that Joe Biden is going to usher in socialism and bread lines and $6 gallons of gas. Joe Biden. Socialist. Come on.

Biden’s agenda also will depend on who wins these runoff races, and I’m convinced that’s why he hasn’t announced his Attorney General pick yet. I am still hopeful that, if the Dems win, Biden will select Sally Yates. If they do not, I expect it will be Merrick Garland, although some professor dude is calling upon Biden to nominate Barack Obama. Ha! (No, but seriously: Save Obama for the Supreme Court, Joe).

Meanwhile, tomorrow will be a day that will almost certainly be characterized by violence, with thousands of pro-Trumpers coming to D.C. (with their guns) to protest the Electoral College. “I hope Mike Pence comes through for us … He’s a great guy,” Trump said at last night’s rally, which was all about him. “‘Course, if he doesn’t come through, I won’t like him quite as much.” If I am Mike Pence, I’d be worried for my life. I’d be worried for Brian Kemp and Brad Raffensperger’s lives, too.

Finally, I leave you all with this: Fox News’ Bret Baier pushing back on Josh Hawley’s suggestion that what happens tomorrow could change the election results.

I did not have Bret Baier smacking the shit out of Josh Hawley with the *checks notes* Tilden-Hayes race of 1876 on my batshit bonkers BINGO card.