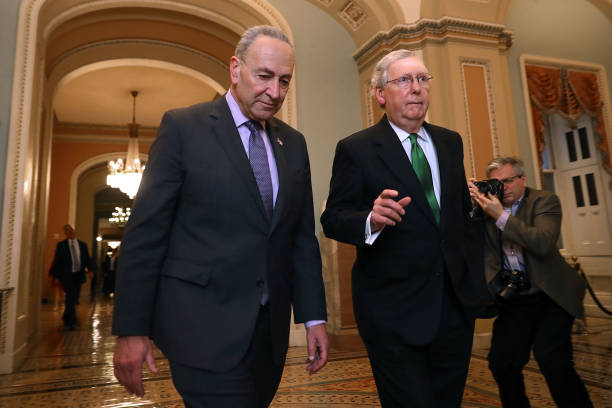 Morning Briefing: Chuck Schumer Gets the Best of Mitch McConnell? Plus, the MyPillow Guy Gets Banned from Twitter

The Senate’s power-sharing accord, which will allow the Democrats to take over the Committee Chairs in the Senate, is finally moving ahead, now that Mitch McConnell has relented on his demand that Democrats agree, in writing, not to gut the filibuster. Everyone, including Rachel Maddow, is calling this a big victory for Chuck Schumer and a loss for McConnell. “Sen. Mitch McConnell has caved and Sen. Schumer has won that fight. That was quick. Let’s see what else we can do,” Rachel Maddow said last night.

I’m not that sure. McConnell only relented when two Democrats — Sens. Joe Manchin of West Virginia and Kyrsten Sinema of Arizona — reiterated their view that they would not gut the filibuster. Joe Biden, likewise, opposes killing the filibuster. I don’t necessarily see this as a loss for McConnell, because though he didn’t get it in writing, he still got what he wanted, which is to maintain the filibuster. That said, if the Democrats pulled a McConnell and implied that they would not gut the filibuster only to turn around and do just that, then, yes, this is a win. But I don’t see it happening, mostly because Manchin and Sinema will want to honor their conservative constituencies.

Nevertheless, it will allow the Senate to move a little quicker now, as they are already behind on confirming cabinet members, although Janet Yellin was confirmed as the first female Treasury Secretary yesterday.

Meanwhile, the House officially brought the Article of Impeachment over to the Senate. A trial will be held in a few weeks, and once again, the Senate will not convict him. They’re never going to get 17 Republicans to convict. The Republicans are already relying heavily on a process argument. “Yes Trump incited an insurrection, and yes he bears responsibility,” they are arguing, “but impeaching a former President is a dangerous precedent. What if we were to start impeaching Presidents from the 1800s?!”

It’s a dishonest, bad-faith argument, but they’re going to run with it, and it will allow them to escape holding Trump accountable without having to defend his actions.

Speaking of the Senate, Ohio’s “moderate” GOP Sen. Rob Portman is retiring rather than run for another term, which probably means that the next Senator from Ohio will be Jim Jordan. Two other moderate Republicans, Patrick Toomey (Pa.) and Richard Burr (N.C.), are also leaving in 2022. If they’re not replaced by Democrats, they’ll probably be replaced by Trump Republicans, in part because Trump will still hold significant sway over the party because it will refuse to convict him in his impeachment trial.

In Biden world, as promised, the President did sign an EO yesterday reversing the ban on transgender troops serving in the military.

Biden also gave a press conference, where he said he’d be able to give 1.5 million shots daily, and that everyone who wants a vaccine will be able to get it this Spring. The Spring lasts until June 21st, but even that seems optimistic based on the numbers. To administer enough vaccines to achieve herd immunity by the 4th of July, we’d need 2.4 million injections a day; to do so by Labor Day, we’d need 1.9 million shots a day. Last Friday, we hit 1.6 million. Still, at this point, it seems it’s more of a matter of supply. If Johnson and Johnson come online with their one-shot, and if Astrozeneca and Novavax are approved, we’ll have the supply, and I would imagine the Biden Administration will figure out a way to administer it. At the moment, however, the rate of vaccination is still crawling. The good news is, the numbers — at least until the variants take over — do continue to drop. Hospitalizations have also dropped to their lowest levels since mid-December. Meanwhile, Moderna is manufacturing a booster shot — a third dose — to deal with emerging variants.

← Did Meghan McCain Just Admit She Still Voted for Trump in 2020? | Kellyanne Conway Accused of Posting a Topless Photo of Her Teenage Daughter to Twitter →