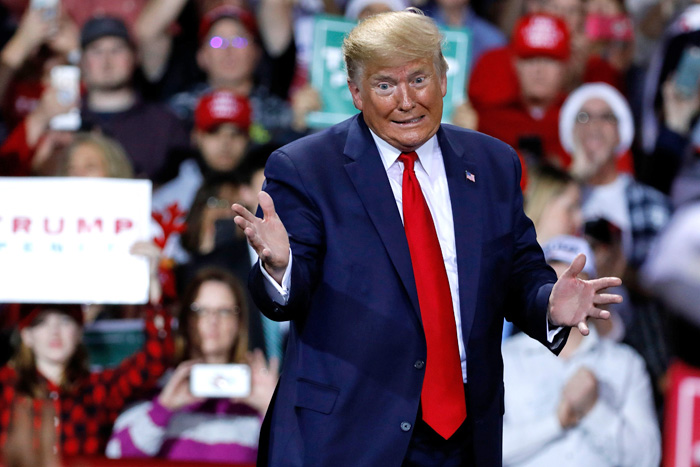 'Christianity Today' Says Trump Should Be Removed from Office, Will It Matter to Evangelicals?

As I’m writing this, #ChristiansAgainstTrump is trending on Twitter, and our nation’s most Day-Glo president has tweeted three times and counting about Christianity Today publishing an article that in no uncertain terms endorses removing him from office. He definitely felt it and immediately spiraled into his special brand of flailing, but let’s not pretend Trump hasn’t done the same in response to SNL sketches, stairs, Megyn Kelly’s menstrual cycle, you name it. In fact, I’m pretty sure his son wrote a book about this exact phenomena instead of growing a chin like a real boy.

….have a Radical Left nonbeliever, who wants to take your religion & your guns, than Donald Trump as your President. No President has done more for the Evangelical community, and it’s not even close. You’ll not get anything from those Dems on stage. I won’t be reading ET again!

I guess the magazine, “Christianity Today,” is looking for Elizabeth Warren, Bernie Sanders, or those of the socialist/communist bent, to guard their religion. How about Sleepy Joe? The fact is, no President has ever done what I have done for Evangelicals, or religion itself!

Thank you to Franklin Graham for stating that his father, the late great Billy Graham, voted for me in the 2016 Election. I know how pleased you are with the work we have all done together! https://t.co/40RX2KM4Vv

While this is a great bit of fun as we barrel into the holiday season that will soon be stripped of all mention of the Christ child once the Abortion Stone is refreshed in the Unisex Restroom of Baphomet (I’ve said too much), here’s the sad reality: It will mean nothing. And I genuinely take no joy in delivering that message because as extremely late as the Christianity Today op-ed is, just so, so late — Seriously, did you guys fall asleep during the whole kids in cages thing? What the hell? — it is absolutely a net good that the magazine took a stand by acknowledging that the evidence for impeaching Trump is “unambiguous.” In terms the editorial can never use, he did that shit. And the more evangelicals try to deny such clear and obvious guilt, well, the dumber they look to anyone with a brain.

To the many evangelicals who continue to support Mr. Trump in spite of his blackened moral record, we might say this: Remember who you are and whom you serve. Consider how your justification of Mr. Trump influences your witness to your Lord and Savior. Consider what an unbelieving world will say if you continue to brush off Mr. Trump’s immoral words and behavior in the cause of political expediency. If we don’t reverse course now, will anyone take anything we say about justice and righteousness with any seriousness for decades to come? Can we say with a straight face that abortion is a great evil that cannot be tolerated and, with the same straight face, say that the bent and broken character of our nation’s leader doesn’t really matter in the end?

Again, as criminally late as these words arrived, the more people of faith who refuse to ignore Trump’s crimes and demand fitting consequences for those crimes the better. Keep that shit comin’, please and thank you. But in the process, maybe start to take a good, hard look at how Trump locked down 80% of the evangelical vote without even pretending to be a Christian because I’ve got some news for you. He’s merely a symptom of the disease. Removing him from office is definitely necessary, but it means f*ck-all if you beat lung cancer only to turn around and keep smoking a pack a day. This isn’t a movie where you take out the Big Bad and all of the minions fall down. The rot is in deep.

What’s left out of Christianity Today’s “brave” editorial is the fact that the evangelical church is the Republican Party. For over half a century, one has been deeply ensconced in the other, and there are virtually no signs of separating the two. Let’s say in the extremely unlikely circumstance that evangelicals turn on Trump and endorse his impeachment, it will be an instant return to basics as soon as the next candidate comes along. Even more so because it will be way too easy to say, “Well, the problem was just Trump,” instead of admitting that evangelicals are an unthinking monolith who will consistently vote in lockstep with the GOP. And why wouldn’t they?

You see where I’m going with this? Trump absolutely needs to go, but every single condition that vaulted his rapey potato sack ass into the Oval Office is still firmly in place. Especially when you consider the fact that evangelicals and Republicans are one in the same and both live on a steady diet of Fox News and batshit Facebook groups like “Jesus Needs Guns To Protect Wedding Cakes and Babies from Nancy Pelosi Dot Org.” Outside of this story, Christianity Today isn’t even a factor in their daily garbage intake. In fact, take a good hard look at the replies to its tweet to remove Trump if you want to see how “good Christian Americans” are responding. (Spoiler Alert: Remember Keurigs and Nikes? You’re in the ballpark.)

However, because I’ll never forsake you, I do come with a beacon of hope. A large motivating factor in the Christianity Today op-ed is that younger generations are turning away from religion in growing numbers. Even better, this decline has been going on since the Bush Administration because it turns out blatant hypocrisy and homophobia aren’t the big sellers they used to be, and that shit was practically quaint compared to what’s happening with Trump. Fortunately, for the future — not so fortunately for the present — the evangelical church has no intention of changing. So while it continues to appeases its aging congregations by holding steady on bigotry, treating women like baby ovens who invite rape, and railing against a social safety net because that’s the church’s job (which it doesn’t even come close to fulfilling), the less chance there is of replenishing those dying numbers with young blood. Not to mention, glorifying Trump is just an accelerant on that process, so you know what? Go ahead and ignore Christian Today, a socialist heathen rag if there ever was one. You don’t change horses midstream, a great hero who choked on a pretzel once said.

Or he is an enemy of the Kumquat State now? I honestly can’t keep up with you people.

← Review: 'The Expanse' Season 4 On Amazon - The Best Bombs Are F Bombs | Stream It Or Nah: Netflix's 'Don't F**k with Cats: Hunting an Internet Killer,' the True Story of Luka Magnotta (Spoilers) →