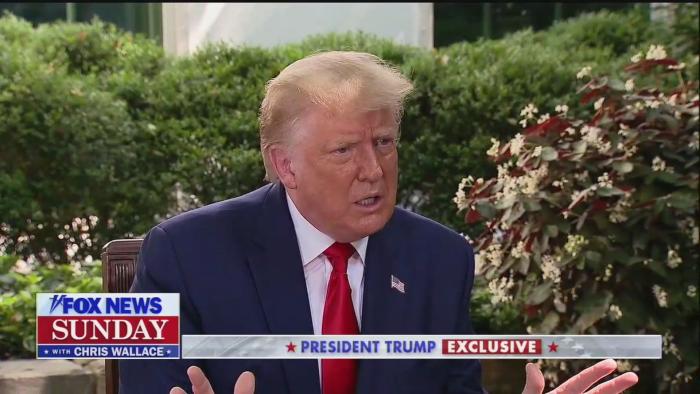 Correct me if I am wrong, but since the departure of Shepard Smith (who is resurfacing on CNBC), the closest thing that Fox News has to an actual journalist is Chris Wallace. He’s the one anchor on Fox News that won’t blow smoke up Trump’s ass, which made Trump’s decision to sit down with Wallace a strange one. How well did Trump think it would go, if forced to sit down and answer questions that were not leading, or already had the answers built into them (a la Hannity)?

However Trump thought it would go, it did not go well. What happened is that Chris Wallace actually … fact-checked the President. And pushed back. Here, Trump claims that the United States has the lowest Covid-19 mortality in the world. He is wrong, and Wallace tells him as much, citing John Hopkins:

W: "We have the 7th highest mortality rate in the world."

T: "I think it's the opposite. I think we have one of the lowest mortality rates."

When Trump insists that certain states with Democratic governorrs won’t allow him to have rallies, Chris Wallace suggests to him that maybe it’s “because of public health reasons”:

This is some shameful incompetence from the President as Chris Wallace fact checks him on testing pic.twitter.com/j8XYvo0Mpe

This is the kind of bold statement want from a President! “I’ll just keep saying the same thing, because even a broken watch is right twice a day!”

Chris Wallace pressed Trump on how he wrongly claimed the virus would just disappear.

Trump often brags about taking a cognitive test and passing it, saying that Biden couldn’t do the same. Chris Wallace says that he took it, and that it is actually really easy. Trump continues to insist that Biden could not pass it (nor could Wallace) (Here’s the test. It’s very very simple, and not an intelligence test, but one used to assess people for dementia).

"I took the [cognitive] test too, when I heard you passed it. It's not the hardest test. It shows a picture and it says, 'what's that,' and it's an elephant." — Chris Wallace pushes back on Trump hyping the cognitive test he passed at Walter Reed pic.twitter.com/8Df8Ez10Ma

The transcript of that exchange looks even worse:

Chris Wallace’s interview is something - two notes 1) why aren’t other journalists doing this? He was just leaving interviewed by CBS News? and 2) there is no way Trump shows up for the debates. pic.twitter.com/qcHlupSlTY

Are we sure Trump passed that test?

When Wallace reads out the results of a brand new Fox News poll, Trump calls them fake and starts citing made-up polls that show he is winning in every battleground state.

I haven’t seen the video of this yet, but Trump actually said this. The President of the United States:

Trump to Chris Wallace in the @FoxNewsSunday interview: "Let Biden sit through an interview like this, he’ll be on the ground crying for mommy. He’ll say mommy, mommy, please take me home."

Twitter is reacting as it should to this train wreck:

We all owe a debt to Chris Wallace and to whoever suggested @realDonaldTrump sit down with him for this interview. Wallace is a real journalist and Trump is acting like a completely deranged, dementia laden lunatic in this interview at new levels, for the whole world to see. Wow.

BREAKING: Chris Wallace asked Donald Trump about the American death count (145,000) as a result of COVID-19, to which he responded: "It is what it is." What other evidence do you need to conclude he is fundamentally unfit for office?

Nobody is a better campaigner for Joe Biden than Donald Trump.

Trump’s interview with Chris Wallace is practically an in-kind donation to the Biden campaign.