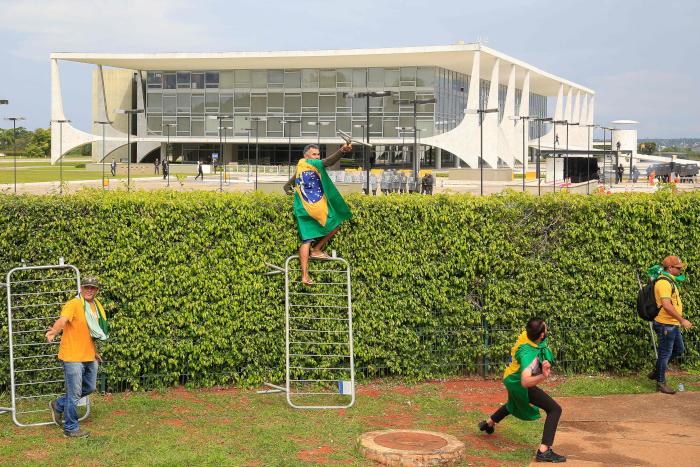 Brazil's Own January 6th, or South America Is So Exhausting

No insight into Brazilian history or politics can help you understand what happened yesterday because there is nothing new about what happened, there is not a lick of difference over what we saw on January 6th, 2021. It’s the same exact script, coordinated by the same exact bad actors, carried out by a very similar sect of useful idiots, using the same bullshit arguments, in a country much too similar to the United States. The only difference is that we Latines actually have experience with these things. Way too much experience.

Here’s a “quick” recap: On October 2, Brazil held its General Election (President, Governors, Chamber of Deputies plus 27 Senators) and on October 20th, it held the second round for the Presidential and some Gubernatorial elections. On both rounds, the southern former guy and the parties supporting him had a stronger showing than what had been anticipated, because… f**k it. I don’t know. I mean, the northern former guy and the GOP also did better than expected in 2020, even though they messed up COVID in almost the same way (except Bolsonaro was actively anti-mask and anti-vaccine), they were corrupt in almost the same way (except Bolsonaro is too closely linked with the murder of a political activist) and were racist and fascist in the same way (except… if you thought Latin America’s racialized relations were complex, Brazil is another world). The saving grace is that Brazil is actually … still a Democracy, with a proportional Parliamentary system. Better still, voting is mandatory, all adults are registered, turnout is usually above the 75% mark, and they have one of the cleanest and most efficient voting systems in the world. This is a country of 200 million people, as large as the USA but large enough that there are actual uncontacted peoples deep in the Amazon jungle.

Yet, by 22:00 EST, 90% of all votes are tallied with a clear picture of the Parliament’s composition, and in the case of the Second Round, with a definitive result on who will be the new president. As such, Luis Inácio Lula da Silva was reelected for a third time after his transformative stint between 2002 and 2010. Just like Biden (or Patricio Aylwin or many other democratically elected presidents following a destructive, fascist government), he presides over a broad coalition, comprising everything from his Left-Wing homebase to Center-Right parties, with a Parliament where the margins are razor-thin and the Bolsonarist disease still has a strong grip over the country. After being unjustly convicted and imprisoned (by a judge turned Bolsonaro ally), his was the ultimate comeback story. Meanwhile, just like the northern former guy, the southern former guy ran to Florida with a gaggle of his Armed Forces supporters.

But none of that was enough for the southern former guy’s supporters, just as fanatical and sharing the same ideology as their northern counterparts. Just like their northern counterparts, they refused to accept reality because they are too pure, too Christian, and too white (insert thinking face emoji) to have to abide by things like facts, and “third-party, independent corroboration.” They kickstarted the same kind of protests, even more violently. Lula’s new government was inaugurated on January 1st and since the process in Brazil is more straightforward than in the US, and probably because during the 1st they were busy with New Year’s celebrations, they converged on the capital the following Sunday, doing the same exact things as their northern counterparts: Bullying, intimidation, setting things on fire, trespassing official buildings to vandalize artworks. The warm-up exercises of the fascist. But this time, the Federal Government wasn’t tied up, they reacted as quickly as possible, arresting over 1,200 of the failed golpistas. Perhaps finally reacting from their Center-Right slumber, major media outlets like Globo or Folha Do Sao Paulo called this thing and its players by their name: Terrorism.

I’m tired of even trying to explain this. I’m tired and I’m afraid, but I’m also not surprised. In fact, I doubt that there’s a single person in Latin America who can say they were not expecting this to happen with a straight face. Well, no one but Latin America’s so-called Center-Right, always touting their commitment to Democracy, obsessing over the Venezuelan disaster, but jumping into bed with fascists whenever those tax brackets or former marginalized groups start climbing near their country clubs.

I’m exhausted because this is what the US keeps exporting down the border. Remember those “make trade fair” campaigns of the 2000s? Remember Dumping? Well, you keep exporting your worst: Corruption, political intervention, propped-up candidates, propaganda so pervasive we miss the signal for the noise (case in point, those still defending the Venezuelan disaster), and terrible economic policies. But then you export your cultural worst, and Dumping comes in the form of Evangelical missionaries and the playbook for cultural wars, it comes in the form of far-right political consultants saying exactly what our white elites want to hear. This is our real problem.

Because for all of the US’ interventionism (and Europe’s… but mostly the US and UK), it’s our white elites that mollycoddle fascists and the military whenever it suits them (a group of people they will still deem as social-climbing, uncouth mongrels). It’s Latin American elites that are enamored with their own sense of whiteness and superiority, enamored with a Europe or a US in which they could never succeed. Because the laziest individuals on the planet are Latin American elites. They never had to adapt to major Revolutions. They never had to contend with the effects of World War II. They never had to develop Industry, they already reigned supreme over the most fertile, diverse, and beautiful land on the planet. They were already Colonizer and Metropolis at the same time. They have had a perfectly stratified society, so efficient they didn’t even need to fall into the excesses of the White Anglo-Saxons, like banning interracial marriage. For every privilege that has been taken from them throughout the 20th and 21st Century (usually at the hands of those Middle and Working-Class people in the cities, like Lula), they’ve found a way to set the clock back as far as they can. After all, they can always call on the military or fascist shock-vanguards to keep things in check.

Brasilia was supposed to be a dream of Modernity, built by architects inspired by their Communist or Socialist ideals. A time capsule of all the Post-War dreams of Brazil and Latin America. The results were flawed, at best, but one thing you can never take away from its buildings is how architect Oscar Niemeyer somehow made a monumental kind of architecture beautiful, accessible, and humble. Democratic. Unlike the US Capitol, built by Workers. Yesterday, the buildings in the Square of the Three Powers were covered by fascists vandals, donning the football jerseys of their national squad.

You can’t stop thinking that the Verde Amarela, the Yellow-Green colors of every Brazilian flag; they don’t go with fascism. There’s too much liveliness, it’s so organic and natural compared to Royal Purples or Prussian Blues or the Reds. Fascists will always appropriate their country’s flags, but I’ve never seen such a desecration as when they use Brazil’s flag.

Alberto Cox is too tired to write something witty here.