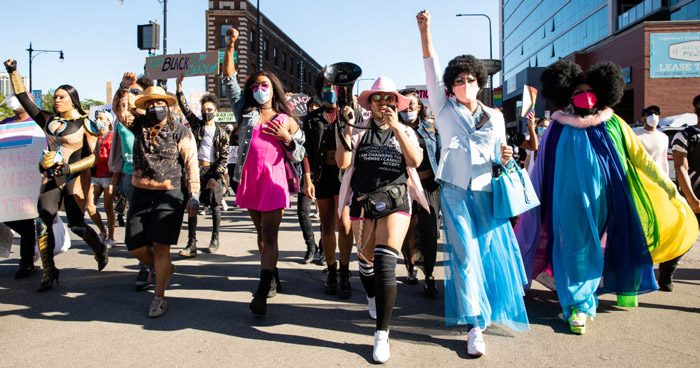 Black Lives Matter Protests Are Ongoing Thanks To Teens, Moms, And Drag Queens

Black Lives Matter protests are ongoing across the country, demanding reforms that would end rampant police brutality. However, videos and photos from them may not be on your social media timeline much. That’s because sites like Twitter try to keep their trends “fresh,” circulating new keywords into your sidebar even if not-so-fresh ones are still trending and essential. News coverage works similarly. It’s not new that Black Lives Matters protests are happening. They’ve been happening since George Floyd’s murder on May 25, 2020. Cable news and newspapers were covering the protests early on because of the massive turnouts. These were all the more newsworthy because of the pandemic. People knew they were risking themselves on two fronts: potential contamination and confrontations with a police force that often turns to tear gas and assault.

That’s another thing. Police are continuing to make headlines because of their violence, like the murder of Rayshard Brooks, who was fatally shot in the back by police on June 12 in Atlanta. Meanwhile, peaceful protests aren’t getting coverage. The old adage “if it bleeds it leads” governs a lot of news coverage, and so major outlets will run stories about the Wendy’s where Brooks was killed being set on fire amid protests. They’ll even use a picture of the building engulfed in flames to goose clicks. They’ll report on the number of arrests from BLM protests around the world. But where are the stories of the peaceful protests that are ongoing?

Here are a few of those stories just from this past weekend.

In Bowling Green, Kentucky, Black Lives Matter protests have been going on for weeks, and the number of participants continues to grow. Bowling Green for Peace has started a bail fund, which boasts $1000 in donations so far. (WBKO)

In Metairie, Lousiana, 16-year-old Olyvya Boatright led a protest in support of BLM. She hoped her friends would show up and was pleasantly surprised when nearly two dozen people turned out. (WDSU)

In Huntsville, Alabama, Dijai ‘DJ’ Curry organized a rally of dozens, calling for an end to police brutality. This event and prior BLM protests have also served as a Get Out the Vote effort, resulting in signing up 50 new voters since Thursday. (WAFF)

On Sunday, off the coast of Samoa Peninsula’s Coast Guard station, 150 people turned out for Paddle Out for Peace, a water-based demonstration done in honor of those lives lost to police violence. “Paddle outs are our way of showing respect to those who have passed,” local surfer Delia Bense-Kang told the crowd. “Unlike other paddle outs, this one is part of a larger movement. More surfers have now paddled out for this cause than perhaps any other in the history of the paddle out ritual.” (Northcoast Journal)

In Plainsville, New Jersey, a Black Lives Matter march was organized by former Plainfield Academy for the Arts & Advanced Studies students. About 200 people gathered, chanting, “No Justice, No Peace, No Racist Police.” (Tap Into)

In Waterloo, Illinois, roughly 300 people turned out for “Waterloo Speaks,” a demonstration during which attendees carried signs calling for justice for George Floyd. No local politicians attended, which spurred one speaker at the event to declare, “Their silence is deafening.” (Republic Times)

#NOW A protest in Newport for the Black Lives Matter Movement underway. This is the third weekend of protests in Rhode Island. Organizer Lanier Chapman tells me people need to continue to fight for change @wpri12 pic.twitter.com/RsSwLuGPbQ

In Providence, Rhode Island, a massive crowd of protesters included healthcare workers who carried signs that read white coats for black lives” and others saying, “racism is a cancer.” (WPRI)

The local news also spoke with 13-year-old Jaydon Gaines, who joined the protest, and said he did so in hope that “My kids, their kids’ kids don’t have to come to these events it shouldn’t be necessary.”

Yesterday in Brooklyn, New York, the Marsha P. Johnson Institute, The Okra Project, and Black Trans Femmes in the Arts co-organized a Black Trans Lives Matter march which gathered an estimated 15,000 people. The goal is to draw attention to a vulnerable population under attack by prejudice, police, and the White House, who just made it more difficult for LGBTQ+ people to get healthcare. (CBS News, NBC News, )

Seeing all these people show up today to say “Black Trans Lives Matter” is really making me emotional. pic.twitter.com/4SQepotqWE

In Chicago, Illinois, drag queens—including RuPaul’s Drag Race All-Star Shea Couleé— led a Black Trans Lives Matter march called The Drag March for Change, which drew thousands. Together, they called for justice for George Floyd, Breonna Taylor, and Tony McDade, a Black trans man who was murdered by a Tallahassee cop in May.

Organizer Joe Lewis (A.K.A. Jo Mama) told the press, “This is a protest, not a parade. We’re not here to entertain you. We’re here to make you listen and learn. And to make you open your purse.”(WGN, Chicago Sun Times)

The Drag March for Change has kicked off in Chicago, in support of Black Lives Matter and demand justice for victims of police brutality and excessive force through the Boystown community. #ChicagoProtest #BlackLivesMatter #BlackTransLivesMatter pic.twitter.com/MMzq2wCKR3

Here are some charities where you can put your purse first.

Did we miss a protest that deserves some spotlight? Please share it in comments.