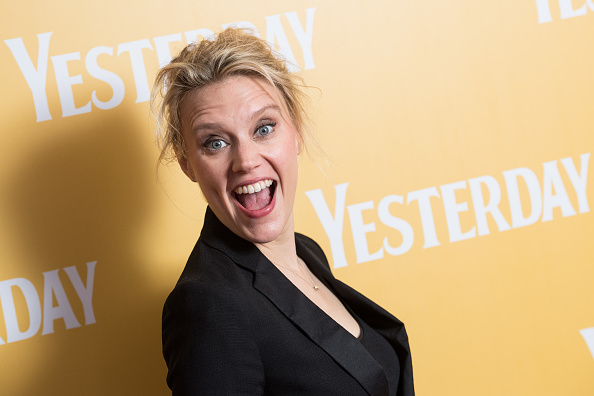 We all experimented a little college. Some of us with drugs, some of us with same-sex partners, and some of us with Bari Weiss. Not even Kate McKinnon is perfect. Alas, McKinnon’s ex has quit her job at The New York Times, a job in which she was afforded a very handsome salary to write, like, 1,000 words twice a month. Weiss cites several reasons for her decision to “self expel,” but chiefly she blames the NYTimes for too often allowing Twitter to dictate its editorial direction (not inaccurate) and for failing to protect her from “constant bullying by colleagues who disagree with my views.”

They have called me a Nazi and a racist; I have learned to brush off comments about how I’m “writing about the Jews again.” Several colleagues perceived to be friendly with me were badgered by coworkers. My work and my character are openly demeaned on company-wide Slack channels where masthead editors regularly weigh in. There, some coworkers insist I need to be rooted out if this company is to be a truly “inclusive” one, while others post ax emojis next to my name. Still other New York Times employees publicly smear me as a liar and a bigot on Twitter with no fear that harassing me will be met with appropriate action. They never are.

Weird. Sounds like Weiss has mistaken being disliked for bullying. Ironically, when a bully like Bari Weiss is doing the bullying, it’s called “freedom of speech.” She calls it “unlawful discrimination, hostile work environment, and constructive discharge.”

I am not actually that familiar with Weiss’ op-eds. Like Bret Stephens’ columns, the only ones I ever read are the ones that trend on Twitter, and only then, because I want to see why they are being dragged. From what I have read of her work, she mostly complains about being attacked by the “online mob.” Like most conservative writers in positions of status and power, she is constantly aggrieved. She will not be missed, mostly because she will almost certainly be employed at conservative outlet within minutes, perhaps along with Andrew Sullivan.

This will be my last week at New York Magazine.

The logical conclusion of the Trump presidency is finally coming to fruition. All of these jackasses who were afforded a mainstream platform by virtue of Trump’s electoral college win are finally being cast back into the conservative circles from whence they came. Twitter, by the way, has thoughts:

it take's some fucking nerve to talk about ideological purity testing and wrongthink after voluntarily resigning from a paper that gives ross douthat, david brooks, maureen dowd, and bret stephens columns.

Oh cry me a fucking river, @bariweiss. Have you even READ your employer's headlines lately? Or the fact that they gave Tom Cotton column space to advocate for a police state? Or Bret Stephens like EVERY SINGLE DAY? You want to talk snowflakes? Look in the mirror. https://t.co/MivQCKoo0G

Seeing a lot of folks saying Bari Weiss’ resignation exposes the roots of the demise of American journalism. I’d suggest that hedge funds buying and ripping apart outlets across the country and massive tech giants sucking up all the ad revenue are more important matters.

I’m just completely over this idea that “professionalism” means holding your tongue when somebody at your publication, or in your field, says or does something that negatively affects you and people you work with. Where are the “freedom of speech” advocates on this issue?

Every major news organization in existence bends over backwards to please extremely dumb bad faith conservatives who cannot survive on a level playing field, yet every one of these failures blames a rigged system when they finally implode. What a life that must be.

Congrats to that one on the new job she has (my guess is a website she's launching to talk about her feelings with people who won't challenge her, presumably backed by VCs who like her and tell her she's always right) plus probably a book deal about to be announced. Zzzzzzz.

i can't even begin to imagine the level of Brain Cloister you have to have achieved to believe "not everyone likes Bari Weiss" is "the biggest media story in years" https://t.co/YqqWClCQsx

I will never stop laughing at the fact that an opinion writer quit their job because other people kept expressing their opinions.


← What If 'Step Brothers' Was Directed By 'The Lighthouse's Robert Eggers? | How Much Exactly is a Billion Dollars? →