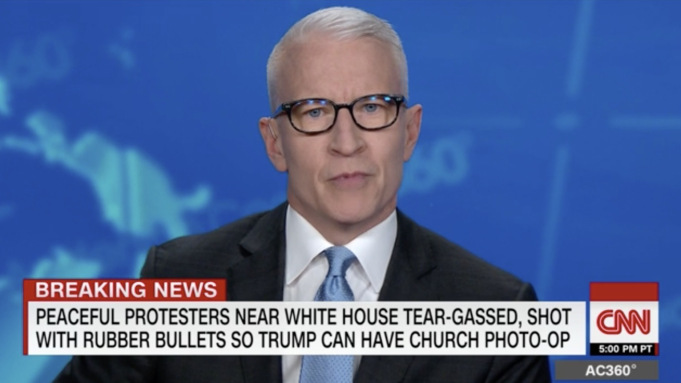 In case you missed it, yesterday the President of the United States declared quasi-martial law and then cleared a peaceful protest with tear gas so that he could have a photo op and impress his base:

And here is how Australia — one of our biggest allies — viewed the scene last night.

Here’s how this scene was viewed live in Australia. One of America’s closest and most dependable allies. Rendered speechless. Just watch. pic.twitter.com/IjOzgs3WYo

After 243 years, it feels like the American experiment is pretty much done. The scenes were are seeing on our television screens look like something we might see in China or Turkey or Russia. The only saving grace, so far, is that at least the media is still allowed to speak its mind, although the #@$ing paper of record chooses to cover last night like this:

You’ve got to be kidding me. https://t.co/XJqrTH5P7c

Unbelievable. I am thankful, however, that our media is still able to speak truth to power when it wants to, and when it’s not being restrained by a profit motive. Here’s Anderson Cooper doing just that on CNN last night, delivering a powerful monologue calling Donald Trump the “thug” in this equation.

"The president seems to think dominating Black people, dominating peaceful protestors is law and order. It's not. He calls them thugs? Who is the thug here? Hiding in a bunker? Hiding behind a suit? Who is the thug?" Anderson Cooper has HAD IT. pic.twitter.com/omBWuAoTfk

Here’s Cooper reacting after he learns why Trump cleared protestors. “We are in trouble. This country is being led by a man who … is hiding in a bunker, and he’s embarrassed that people know that, so he has to sic police on peaceful protestors so he can make a big show of being the ‘little big man’ walking to a closed down church … the only people the world is laughing at is the President of the United States.”

CNN reports that Trump used tear gas and rubber bullets on peaceful protesters for a photo op, after being upset about media coverage about him being rushed to a bunker. pic.twitter.com/LN0tA51gjA

Every single day, every single week, every single month, it feels like Trump’s presidency has been defined by a new low. I didn’t think he could get lower than “good people on both sides,” or being impeached. But here we are, a low that will probably redefined by an even bigger low in the days and weeks to come.

All proceeds earned from advertising revenue today will be donated to ActBlue, which provides community bail funds for protestors who have been arrested.