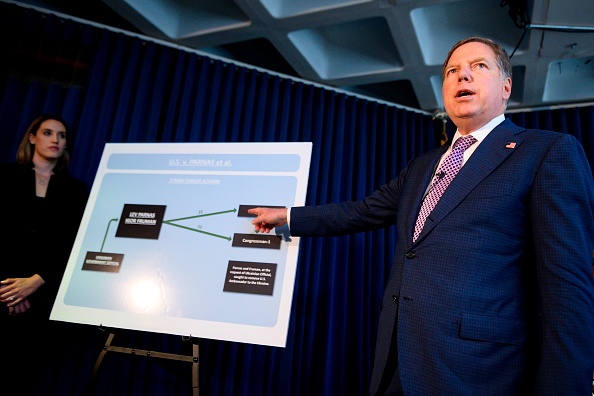 Update: And Berman is gone.

No headshot for this one. :( https://t.co/eMneK1QphK

Because he stood up to William Barr, however, means that his deputy will be taking over instead of a rando Trump loyalist.

My understanding of what has gone on so far is this: Last night, Barr announced that Geoffrey Berman was resigned. Berman said, “That’s not true.” Barr did not have the Constitutional authority to fire Berman, so Berman returned to work this morning. Some suggested, however, that Trump himself could fire Berman, so Barr sent a letter notifying Berman that Trump had fired him.

“Because you have declared that you have no intention of resigning, I have asked the President to remove you as of today, and he has done so.” Per @davidgshortell pic.twitter.com/XYjvNHb1vU

My sense is that this is a lie, that Trump wanted to fire Berman but — because it was because he and/or his associates were being investigated — he wanted it to look like he was not involved, so he threw William Barr under the bus. So, either Trump was involved, or Barr lied.

Barr lied in writing about firing a US Attorney.

The House has the power to impeach the Attorney General, in case anyone is curious.

Meanwhile, six members of Trump’s advance team in Tulsa tested positive for Coronavirus, while a peaceful protestor — who had a ticket to the Trump rally — is getting a ton of headlines after she was arrested.

🚨 🚨 🚨 Police just forcibly removed, manhandled, and arrested a peaceful protester at Trump’s Tulsa rally for no discernible reason except wearing a shirt that said “I can’t breathe.” She had a ticket and was not trespassing. This arrest was illegal.pic.twitter.com/eT7dWpEzpd

———
If y’all fell asleep last night after watching Miss Juneteenth and haven’t checked the news this morning, the President and his henchman, Attorney General, tried to commit some crimes last night but were essentially told to eff off by Geoffrey Berman, the powerful U.S. Attorney in the Southern District of New York, who brought down Michael Cohen.

Cohen is not the only target of Berman, who has jurisdiction over the Trump Organization and crimes committed by family members therein, plus he is currently investigating Rudy Giuliani, which probably explains why William Barr tried to fire Geoffrey Berman. Barr announced the “resignation” late on a Friday night, which is when Trump always tries to bury his bodies.

Berman, however, only learned of the resignation from the press release, and he had other ideas. “I have not resigned, and have no intention of resigning,” Berman said in a statement. “I will step down when a presidentially appointed nominee is confirmed by the Senate. Until then, our investigations will move forward without delay or interruption. I cherish every day that I work with the men and women of this office to pursue justice without fear or favor - and intend to ensure that this office’s important cases continue unimpeded.”

There may be some sort of Constitutional crisis looming here, but legally, Berman is correct. He was appointed on an interim basis by Jeff Sessions after Trump fired Preet Bharara — who was also investigating the President — but after the interim period ended, Berman was appointed by the United States District Court for the Southern District of New York under 28 U.S.C. Section 546(d), which means he cannot be replaced until the Senate confirms a replacement. Trump is trying to replace Berman with Jay Clayton, the chairman of the Securities and Exchange Commission, who has virtually no experience as a prosecutor.

Quick refresher: Berman has overseen the SDNY in the investigations of Giuliani associates Lev Parnas and Igor Fruman; he’s the guy who charged Jeffrey Epstein with sex trafficking of minors; he indicted Halkbank, the largest state-owned bank in Turkey, and — according to John Bolton — Trump promised Turkey’s President he’d resolve that situation for him; he charged Michael Avenatti with extortion in connection with his threat to Nike; and he charged Cesar Sayoc with sending explosive packages to Democratic leaders, including Barack Obama and Bill Clinton.

Berman has been very busy. There is even some suggestion that he was investigating the President.


← Congresswoman Pressley Would Like a Word, Mr. Barr | Donald Trump's Tulsa Rally Was a Disaster →