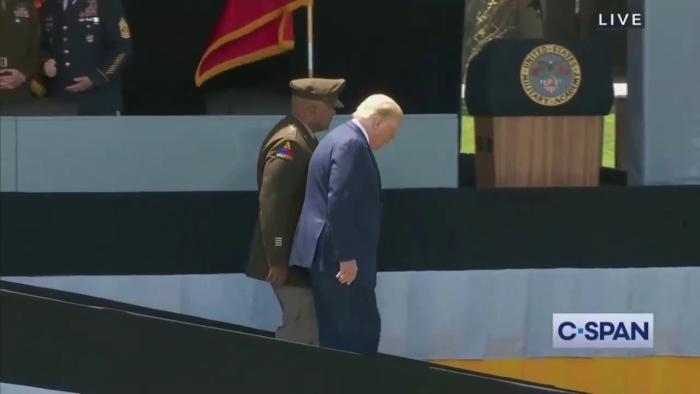 Today is Donald Trump’s 74th birthday, and based on a commencement speech he gave at West Point yesterday, the years, the stress of the job, and the racism have clearly taken a toll. For instance, compare Trump in 2015 to low-energy Trump yesterday at West Point:

this is kind of wild https://t.co/0veL5Fcv7w

Meanwhile, here the President bizarrely needed the aid of one hand to help the other hand lift a glass of water to his mouth.

After he gave his speech, Trump also had difficulty walking down a short ramp.

Trump descended a ramp extremely carefully at the end of his West Point speech today pic.twitter.com/uMG3KyB1V1

But listen y’all — especially the Fake News — that was a really hard ramp to navigate. And we all saw him “run” down the final teen feet, didn’t we? Look at him run! MOMENTUM.

The ramp that I descended after my West Point Commencement speech was very long & steep, had no handrail and, most importantly, was very slippery. The last thing I was going to do is “fall” for the Fake News to have fun with. Final ten feet I ran down to level ground. Momentum!

As you can imagine, Twitter is having a blast this morning with several trending topics, including #rampgate:

look how easily Obama walked up the same ramp

I know people are teasing you, saying #TrumpWearsAdultDiapers but you’re all grown up now & should be proud of wearing your Big Boy Bunker Britches full to the brim with shits & pisses. Pretty soon you won’t have to flush 15 times! pic.twitter.com/kMb7HuZQGG

Why can’t President Trump lift his right arm to his mouth & lean it back to drink or walk down a flight of stairs?

Why does he slur his speech & meander?

These are legitimate questions about the mental/physical health of a President who appears in major decline.

Meanwhile, Twitter is also trolling the President on his birthday, because “Best President Ever” is also trending, and all of the examples are of Obama:

The best president ever. I miss him so much. #ObamaDayJune14th pic.twitter.com/BhFtiXZqmZ

It’s @realDonaldTrump’s birthday. Be sure to share this picture of the best President ever! pic.twitter.com/CP8QSKQhB0