This morning, I woke up and the first thing I watched was last night’s A Closer Look with Seth Meyers. It aired 10 hours ago. It’s already woefully dated. It’s about the infections in the White House. It’s about Trump calling in to Fox News on Friday and rambling and taking about what he learned from Nixon. It’s about Trump trying to send American workers into the virus.

However, last night’s “Closer Look” missed the two biggest developments in Trump world of the last 24 hours. First off, this morning, he’s on another anti-Obama tear on Twitter. He’s raving about ObamaGate, which is something he made up, and now Fox News is trying to invent a scandal that Trump can attach to the term. Honestly, pay it no mind. Trump is angry that the White House and the intelligence community had the audacity to investigate the Russians for meddling in our election, and even though the Mueller Report gave Congress a road map to impeach the President, Trump is pretending as though no one did anything wrong and the fact that the Obama White House investigated the Trump campaign is treasonous.

A few people have mentioned that dismissing the case against Michael Flynn is the first step toward imprisoning political rivals. Watch your back, Obama and Biden. Trump is trying to build a case on Twitter. Anyway, as part of his tirade this morning, Trump — who was also rage-tweeting Morning Joe — also accused Joe Scarborough of murder.

When will they open a Cold Case on the Psycho Joe Scarborough matter in Florida. Did he get away with murder? Some people think so. Why did he leave Congress so quietly and quickly? Isn’t it obvious? What’s happening now? A total nut job!

And yet, accusing a cable news host of murder is not the most insane thing that happened in Trump world over the last 24 hours. That would be his meltdown yesterday at a press conference, in which he abruptly walked off after a couple of “nasty” reporters (women, obviously) asked him harder questions than he wished to answer. The first question came from CBS’s Weijia Jiang, who asked Trump why he was bragging about the amount of testing done in America, trying to turn this into a competition between nations as thousands of people continue to die. “Why does [the amount of tests] matter? Why is this a global competition to you if every day Americans are still losing their lives and we’re still seeing more cases every day?”

“Why don’t you ask China?” Trump snapped, before asking for another question. No one offered, because they were respectfully allowing Jiang to follow-up.

“Sir, why are you saying that to me, specifically?” asked Jiang, who was born in China, but moved with her family to the United States when she was 2. She is also the reporter who stated that people in the White House have called the Coronavirus the “Kung Flu” to her face.

Trump said that he would say that to “anyone who asks a nasty question.”

“It’s not a nasty question,” Jiang said. “Why does that matter?”

At this point, Trump — who doesn’t have an adequate answer — moves on to CNN’s Kaitlin Collins, but then decides, “F**k it. I’m done,” and storms off.

After getting into an argument with CBS' Weijia Jiang over what he called a "nasty question", Trump abruptly ends the press conference and refuses to answer a question from CNN's Kaitlan Collins (who he called on) pic.twitter.com/yAQdfMcirF

In the meantime, after that embarrassment, Trump is out there on Twitter this morning complaining because he thinks he should get credit for the high approval ratings of the governors around the country.

Remember this, every Governor who has sky high approval on their handling of the Coronavirus, and I am happy for them all, could in no way have gotten those numbers, or had that success, without me and the Federal Governments help. From Ventilators to Testing, we made it happen!

Trump, whose approval rating sits at 43 percent, can at least take solace in the fact that he’s doing better than Brian Kemp in Georgia. 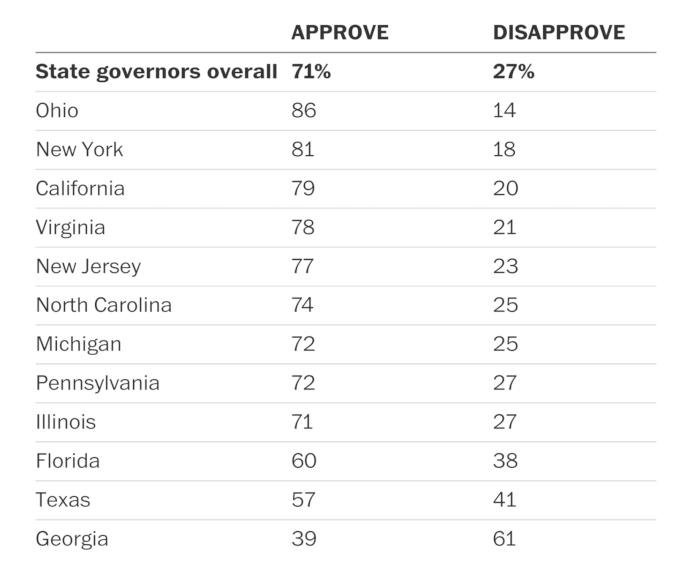 ← Did Emma Stone Get Secretly Married Under the Cover of Quarantine? | Robert Pattinson Is Using Lockdown To Become a Chaotic Pasta Man →