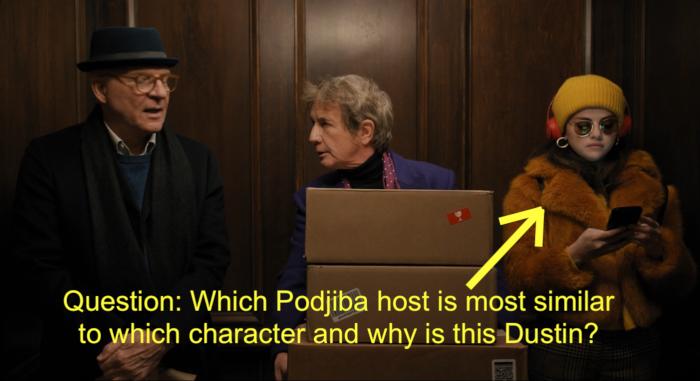 'Only Murders In The Building,' 'What If?', And A Familiar Villain Returns On Podjiba!

For those of you who are about to embark upon this journey into podcast land, please note that Dustin was drinking the Substance Ale from Bissell Brothers — a minor fact that was lost to our technical times during our recording session. We apologize for the inconvenience.

What we do not apologize for: our television takes! As usual, there are many.

After congratulating Dustin on his grand victory, as he (and Netflix) rescued Manifest for a final season, Tori brought the latest news from the lands of Marvel’s What If?, which sounds like it’s starting to get really dark.

Then, after a Dustin-led conversation about the latest season of American Horror Story which also looped back to Dustin’s love of Manifest via a slightly larger conversation about shows on FX (not FX on Hulu, although you can see them on Hulu, you know what, we don’t have the time for this loop again) and his crowning of Daniel Sunjata as “the handsome one” on Rescue Me, we got to last week’s Ted Lasso (remember, we recorded this on Wednesday), which was enjoyed and also reminded me that this clip of Jamie Phil Dunster exists:

This #bts footage of @phildunster is shoddy, forgive me- but it is unadulterated. pic.twitter.com/WRGvQtQDVa

Finally, we end the night discussing the new Hulu show Only Murders In The Building, which is about three true-crime obsessed neighbors (or at least, who live in the same building) who become podcasters (played by Steve Martin, Martin Short, and Selena Gomez) while solving a murder.

(It’s also within this discussion where a familiar villain returns to us, just in the nick of time!)

I just realized something: there are three of us on Podjiba! Does that mean we aren’t living up to our potential? Should we also be solving a murder? Can we find out who murdered my ability to enjoy things? Maybe next week! But until then, we hope you are happy with our latest efforts, found in various points of the internet, as well as, obviously, right here.


← 'Reservation Dogs' Gets a Well Deserved Second Season | 'The Walking Dead: The World Beyond' Trailer: When Television Universes Go Wrong →