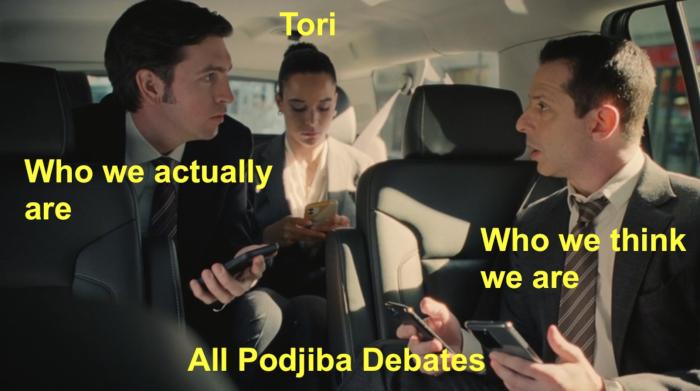 'Succession'! 'La Brea'! And How Many Times Can Dustin Be Wrong, Only On Podjiba!

Look, we here at Podjiba aren’t trying to pile on Dustin or anything. But sometimes… it is very difficult to let some of his stances go by without comment.

Again, I certainly shouldn’t cast stones (especially not after revealing that I’m fully caught up on Frogger, which is apparently all I use Peacock for now), but he also loves Scott Speedman, does not find Aristotle Athari attractive, and also his audio had issues this week!

What I am saying is: perhaps I am no longer the villain, officially.

Also on the show: We talked the return of Succession, which Tori is finally starting to watch! (She’s two episodes into season one!) We briefly mentioned other shows we’re watching (Tori: Cowboy Bebop, Dustin: One Of Us Is Lying, Dan: Frogger)!

And finally, now that we discovered that the failed 2004 pilot for the Mr. Ed reboot is on Youtube, we’re 100% going to talk about it next week. In the event you want to watch along with us…

Podjiba! The only podcast (as far as we know) that features Dustin, Tori, and Dan talking about television every week! If you find another one, um, please let us know because that is very weird and obviously proof of the multiverse (or at least a time travel sinkhole). But this one can be found anywhere podcasts are available, and also here.


← Ahead of Today's Walk-Out at Netflix, Ted Sarandos Concedes He 'Screwed Up' | Stephen Colbert Channels John Denver To Take Shots At Joe Manchin →