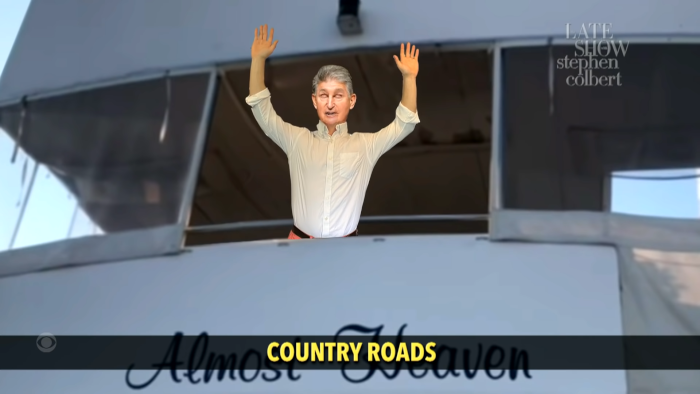 Joe Manchin is a thorn in the side of the Democratic party. He is a roadblock to accomplishing Joe Biden’s agenda. Despite his fellow senators urging him to change his mind, Manchin would rather side with the coal companies that pay him. Instead of getting things passed because the Democrats control the House and the Senate, they are left giving in to one of their colleagues who has questionable motives at best.

While the trouble with Manchin won’t be solved soon, at least we have the crew at The Late Show With Stephen Colbert. I am always in awe of their song parodies. Parodies are not easy, no matter how effortless Weird Al makes them seem. However, the Colbert crew has a knack for them as well. Now, they’ve created one making fun of Manchin’s lack of concern for the people of West Virginia.

When you’re talking about West Virginia, John Denver’s “Take Me Home, Country Roads” is inevitably going to come up. Unless, I would guess, if you live there. Then you may be sick of hearing it. Since I’m a big city liberal, you can hook it to my veins and let Denver’s sweet voice take me away. Here, the Crew paints a picture of West Virginia underwater with Manchin watching from his yacht. It almost makes too much sense.

Manchin may not change his mind anytime soon, but we can still make fun of him from afar. It won’t solve anything, but dammit, sometimes all you can do is laugh. Or cry. Or, ya know, both.