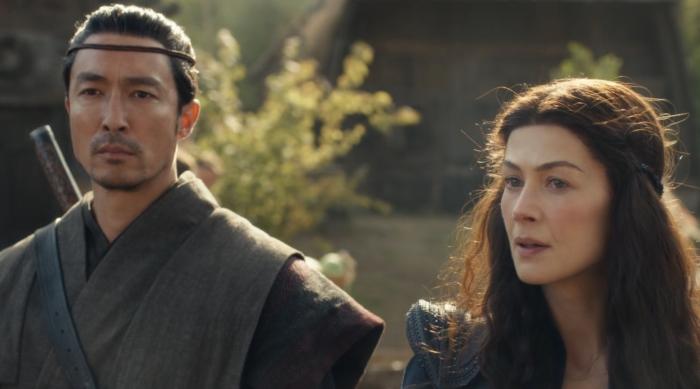 A Special Guest Tries To Convince Us To Watch 'The Wheel Of Time', And So Much More On Podjiba!

Real talk: If our guest (whose name you will hear, but also for some reason I don’t know if I should put it in print? It’s sort of like how you aren’t supposed to say the name of that one play in the theater, but for humans and on this particular website) this week doesn’t convince you to watch Amazon’s The Wheel Of Time, perhaps the header image will? But he does lay out a pretty compelling case!

But if not, we talked about all sorts of other TV for you this week, like:

- Tori and I both finished Cowboy Bebop, and went back to see if our thoughts had changed compared to last week!

- Dustin took us INTO THE SINKHOLE [plonk] for the penultimate season one episode of La Brea!

- We spent way more time on Succession than we anticipated, in part because our guest who shall not be named surprised us by being completely caught up on the proceedings!

- We talked the first two episodes of Hawkeye!

- And in a bonus plot twist, we even spent a few minutes on Survivor (Season 41, which is a totally new game and definitely needs to be stated every time you say the show name, otherwise two Probst minions will appear out of the brush and wrestle you to the ground), because the guest who shall not be named demanded it!

It’s a full episode. And doesn’t even include the theoretical future episode involving the nameless guest, which we definitely recorded!

Podjiba! An experience that is free to all who have access to a reputable podcast provider, or at a minimum, this link right here.


← Alice Sebold Apologizes to the Man Wrongfully Convicted of Her Rape; Her Memoir Is Pulled | Seventeen Minutes Of Billy Crystal Isn't Enough →