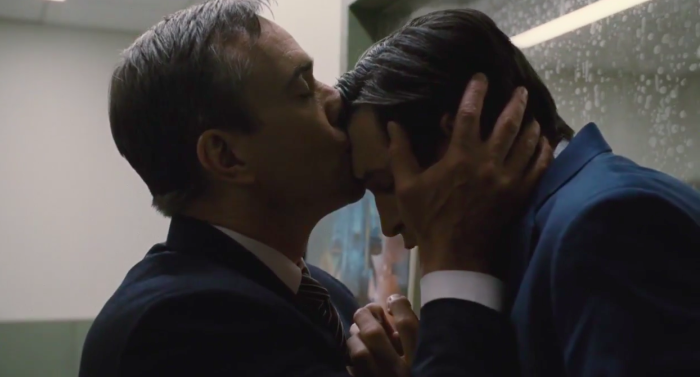 ‘Succession’ Episode 7 Recap: “I Think the Party’s Over, Yeah?”

(spoilers for episode 7, season 3 ahead)

When Billy Joel penned his 1978 hit “Honesty,” a ballad lamenting the lack of truthfulness in society, I don’t think he could have imagined it being used so ironically. Who would have thought that we would be blessed(?) to see Kendall performing with a microphone in hand yet again? We didn’t get an “L to the OG” moment, but I’m curious if a live Kendall performance will become a seasonal thing. Just so long as he leaves the crucifix at home, of course.

It’s the night of “Kenfest,” aka, Kendall’s fortieth birthday bash, and he couldn’t be more excited to invite his closest two hundred or so high-profile strangers to celebrate. For a grown man who yells, “It’s my birthday, f—k you!” over balconies, there are definitely some hurt feelings over the possibility that his siblings might not come. Lucky for him, the owner of GoJo, Lukas Matsson (Alexander Skarsgård), is going to be in attendance, which means that Shiv and Roman will definitely be there, since Waystar desperately needs to acquire it in order to get a better toehold in digital services. Connor also accepts the invitation, no doubt carving out valuable time away from his white-hot campaign streak now that he’s polling at nearly one percent.

When all four Roy siblings are reunited, the first time since episode two, they fall back into their normal acidic banter once more (Shiv, after Kendall makes a dig regarding her open letter from episode 3: “Oh yeah, no, I couldn’t find [a card] that said both ‘Happy Birthday’ and ‘Get Well Soon’”). Despite their toxic repartee, Kendall is genuinely happy to see them, tasteless faux-tabloid cover room aside. But his humor is dampened once he opens Logan’s card, passed along to him by Roman, demanding him to give up his shares in the company and remove himself from Waystar once and for all (Logan tactfully crossing out “Happy Birthday” and writing “Cash out and f—k off”). It would mean a big payday for Kendall, but it would also mean he would have to set aside his longtime goal of running the company. Still, things don’t seem too bad, until Kendall catches wind that Shiv and Roman are there to make a deal with Mattson, which devolves into a case of grown adults playing ‘stay out of my treehouse,’ it being Kendall’s only means of retaliating against his brother and sister at that moment (“This is my treehouse, you shouldn’t be anywhere near here”).

Immediately after, Shiv discovers that this isn’t the only treehouse she’s been denied entry to. After making no headway into Logan’s good graces, finding out that he worked with Roman to construct the offer to buy out Kendall leaves her at the end of her rope. With no access to Mattson and the full realization that she’s been set aside yet again for her younger brother, there’s only one thing she can do: dance it out. It only gives her a momentary reprieve, though, especially once she’s in Roman’s presence once more. Mean as he is, however, I admit that “The Dance of the Sugar Plum Failure” made me laugh despite myself. Still, it’s an ugly thing to watch him cut down his already clearly defeated sister.

Roman has proven himself the jerk whisperer at this point, after making two deals in bathrooms in as many weeks (this one being far less…passionate than the previous week). It says something about Roman that he waits for his target to be in a rather vulnerable position—specifically, be in the middle of urinating—before offering up a preexisting condition on their deal, which is asking Matsson to have a face-to-face meeting with Logan, a man whose death he wished for only minutes earlier. Out of the Roys, Roman is the one who shares the same head for savvy corporate cut-throating as Logan. He may be on his way to becoming the most cherished child, but it’s only a matter of time before the fall comes. How Roman will be able to cope with it is up in the air. He won’t be as obvious with his feelings as Shiv, but it will be just as big of a disappointment nonetheless.

One big development in this episode is the strong possibility that Tom may not be going to prison. It’s a dizzying 180 for him; when you spend an extended period of time believing that the worst is coming to you, having your destiny changed for the drastically better can play hell on your mind. Even Logan’s reassuring pat on the arm with the assurance, “I’ll remember,” isn’t enough to bring Tom out of his daze. It’s only when he goes to his confidante/other significant other, Greg, does he finally let loose. While it’s certainly never okay to upend someone else’s desk to make a point, it does provide us with one of the funniest moments of the entire season. Tom’s happiness is so immense that he can’t keep himself from planting an emotional kiss on Greg’s forehead. Although he starts the evening in full ecstatic merriment (“It’s like I can see the poetry in all the little mundane things!”), a seemingly inexplicable fog of gloom comes over him. Maybe it’s the drugs he took in the wrong order, or maybe it’s the possibility that with a marriage hanging on by a thread and an uncertain future, his life seems less ideal than it once did. Either way, his joy at being able to continue living his life as a free man is short-lived. Worse yet, Greg is happier than he’s ever seen and just like that, Tom becomes the petulant bully once more. It seems there’s no more gabbing about prison blogs over diner food for these two star-crossed lovers.

Upended desk aside, Greg couldn’t be happier about the possibility of prison being off the table. With a new lease on life and the opportunity available to him, he’s decided tonight’s the night to finally ask out Comfry (​​Dasha Nekrasoba), the PR assistant who’s had the misfortune of tending to Kendall and his increasingly capricious needs (an apartment full of vintage lunch boxes would be more than enough reason to quit). Even though both Tom and Kendall try to dissuade him (Tom: “You’re a nine-foot cro-magnon man”), he remains undeterred. Comfry may be out of his league, but she’s had a bad enough night—getting rebuffed by Connor and Willa over a jacket is a definite low point—on top of having the world’s worst client, so saying yes to getting taken out for a couple of drinks sounds pretty good. If nothing else, the two can commiserate over why Kendall is such an ass, especially on this night of all nights.

Kendall’s cranky for a reason. Rava came and burst his “birthday bubble” by revealing that investigators for Waystar have been harassing their children’s nanny when they play at the park, though Rava’s new boyfriend and her inability to be impressed with his over-the-top party certainly doesn’t help. All he can do is snipe at people, unleashing the worst of his ire on Greg. His special night thoroughly brought down, he backs out of his performance (no Tiny Wu-Tang for us, sadly) and diverts his efforts into looking for the present his kids made for him. Of course, it’s the one present in the pile of unnecessary (and undoubtedly expensive) gifts that he can’t locate. If things weren’t bad enough for him, Roman decides to pull the knife he put into Shiv to draw blood from Kendall as well. Because not only did Roman inherit Logan’s business acumen, he also has received the uncanny ability to say the thing that will hurt the most (his tirade about Shiv “dancing for Daddy,” while disgusting, is completely accurate). Kendall doesn’t argue with Roman’s claims that he’s won, he simply informs him that he’s “not a person,” a charge Roman responds to by telling Kendall to hit him. Whether Roman does this out of guilt or a need to see the sibling who helped protect him from their father’s physical abuse perpetuate that abuse himself, it’s hard to say. But seeing Roman giggle hysterically after pushing Kendall to the ground felt like a new, previously forbidden line has been crossed. “It’s funny. It’s funny. You’re gonna laugh at it later,” Roman insists, as each of his siblings leave him alone one by one.

Just when it seems possible that Kendall is beyond sympathy, Succession manages to deliver one of the saddest episodes yet. Many would argue that there can be no pity for someone so wealthy in a society plagued by income inequality, but seeing Kendall surrounded by presents and weeping while revelers party outside is enough to garner sympathy. His first whispered, “I wish I was…” wasn’t about him trying to convey his desire to be home (as he claims the second time, when he’s finally able to complete the sentence); it’s Kendall longing to finish what he first planned to do on the Waystar roof back in season two. It’s fun to watch his increasingly outrageous plans be foiled at times, but there’s nothing funny seeing him curled up in an old A-Team quilt as Naomi, clueless as to who he really is as a person, tries to comfort him.

This is the first episode where nearly everyone who isn’t named “Logan” seems truly damned. Roman may be riding high right now, but he’s the only person who either doesn’t know that time in Logan’s sunshine is fleeting or believes that he’s exempt from the Roys’ natural order of things. It’s easy for him to joke, “I am the only child you’ll ever need, you can kill the others,” but it was only mere weeks ago that he refused to air Kendall’s mental issues and recalled the story of Connor taking him fishing as a boy. It’s likely this increasingly more monstrous side of Roman is a permanent fixture, but being cut off from the rest of his family will certainly affect him one way or another.

A Moment of Zen With Cousin Greg:
“Just getting the demons out, I guess.”

The Biggest Lie:
“I’m the one in the functional relationship.” -Shiv

The Biggest Truth:
“It just feels like an asshole’s birthday party.” -Kendall

Kaleena Rivera is the TV Editor for Pajiba. When she isn’t in full agreement with Rava yet again (friends, pasta alfredo, a few glasses of wine, and lights out by eleven sounds like a perfect birthday celebration), she can be found on Twitter here.


← 'The Walking Dead: World Beyond' Has Been a Profound Waste of Time | Channing Tatum Announces That He And Steven Soderbergh Are Making Another 'Magic Mike' Movie →