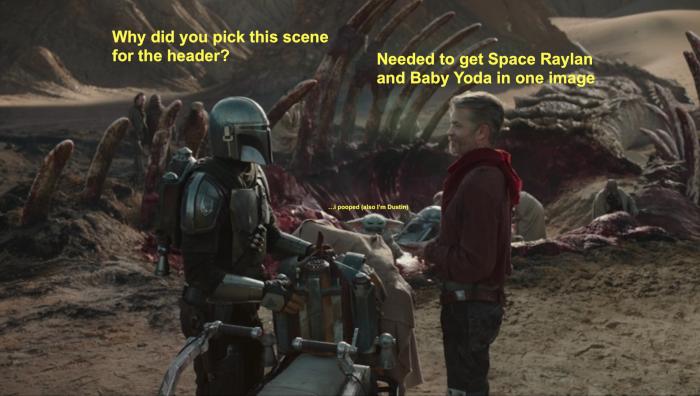 Of Course We Had To Talk Space Raylan On Podjiba!

So, here’s the thing.

We record Podjiba on Monday evenings. This week, that was November 2nd, 2020.

After the episode is “edited” (which I put in quotes because let’s be honest, there’s minimal editing), it is then released to your favorite podcast platforms on Wednesday at midnight (west coast), ready for your enjoyment. In this case, November 4th, 2020.

Anyway, the point is, there are things that had not happened yet when we recorded! So this episode may inevitably feel like… well, look, we had fun, as we tend to do. Hopefully, that fun remains something worth listening to today. If not, no worries! Trust me, I understand.

Naturally, The Mandalorian dominates our conversation this week, as the Podjiba show of 2019 returns in an attempt to repeat as Podjiba Television World Champion. And they brought the big guns! Tori, naturally, was already in once Amy Sedaris made her triumphant return, but then they gave us Space Raylan Givens, and for a brief 50 (!) minutes, things were mostly okay.

Also - holy crap, Supernatural is almost over! Tori catches us up in time for this week’s series finale.

And a game. A long game. We had fun. But it’s like half the episode. You’ve been warned!

As always, here is a disclaimer that suggests that Podjiba can be found on just about all major podcast platforms (and if it can’t, it’s because I’ve forgotten to submit our feed, so if you happen to see one please let me know and I’ll get on that! Except if it’s Pandora, because we’ve been stuck in their system for months and they seem to be displeased with us for reasons unknown). But the episode is always embedded below, in case you like listening here! Or you can download the episode directly from this link!