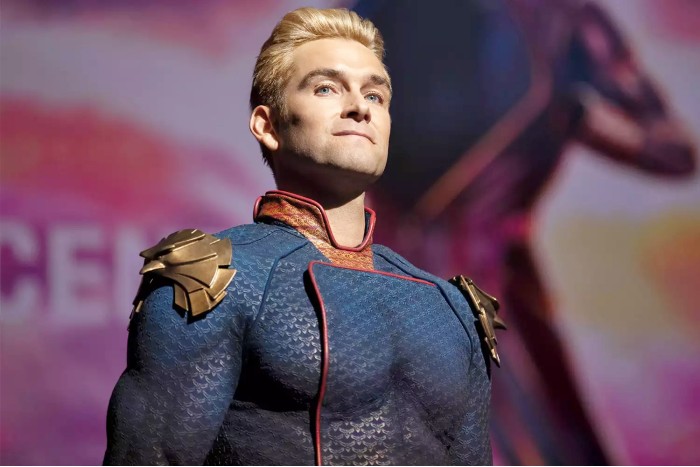 Because our world is dark and full of dumbness, Homelander has been trending on Twitter all weekend thanks to a clearly moronic subset of The Boys fans who didn’t realize until five episodes into the third season that he’s the bad guy. Christ, in the first season, the dude lets a plane full of people die and raped Butcher’s wife. This is not a subtle show, folks, and that’s without even getting into the second season where Homelander falls in love with a literal Nazi. Anyway, if you want a terrifying look into how media literacy is basically non-exist, enjoy. (Ryan Broderick)

For a bonus treat, here’s another brainiac who tried to argue that Star Wars is a “Christian story” because Anakin Skywalker is “Space Jesus.” And, obviously, the correct response here is, “Sweet sassy molassy, Mike, this makes your ‘Darth Vader is a school shooter’ take seem like a doctoral thesis.” Your words, not mine! (The Wrap)

Lea Michele is reportedly replacing Beanie Feldstein in Funny Girl, and judging by my Twitter timeline, this is apparently a huge deal. (Dlisted)

Elon Musk is being sued over his Dogecoin pyramid scheme. (Celebitchy)

From Andrew: Even game shows are getting in on Pride month:

It wasn’t to settle a salary dispute. He had gotten a big raise and just divided it amongst the cast. He was one of a kind. https://t.co/t7KGELqlj7

From Dustin: He knows how to play the game.

On the topic of recasting Wolverine, hear me out here, but what about Matt Berry? pic.twitter.com/gzKXpYVgh6

After getting a crack at Aladdin, Guy Ritchie is making a live-action version of Disney’s Hercules now. (Gizmodo)

Vince McMahon appears to be in some sh*t. (Mediaite)

Happy Juneteenth! Vel veeter recommends Read Until You Understand: The Profound Wisdom of Black Life and Literature if you are looking for a book to deepen your understanding of African American literature. "[Farah Jasmine] Griffin takes significant literary themes like liberation, death, love, home, and other big topics and explores them through the writing of Black writers from many different eras of American literature. (Cannonball Read 14)

We’ve been wondering why Bosco immediately finishes dinner and then runs and burps in my dad’s face or, at my house, my roommate’s face and it’s apparently a bonding thing—she’s telling them “hey, there’s food in the kitchen and here’s what it smells like” what a sweetie 🥹 pic.twitter.com/K5HZW5SUIF