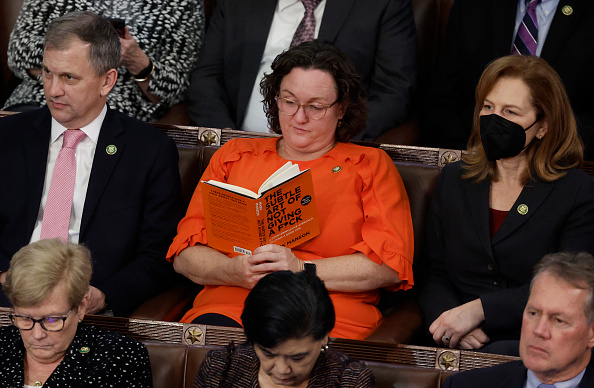 It was rowdy late into the night on the floor of the House of Representatives, where Matt Gaetz cost Kevin McCarthy the Speaker of the House on the 14th ballot and, while McCarthy was basically begging him to change his vote, another Republican Congressmen with violence in his eyes, had to be held back. After six holdouts voted “present,” on the 15th ballot, McCarthy finally secured the position. He will almost certainly regret everything he gave up to secure it. Meanwhile, Democrat Katie Porter (header image, above) conveyed the necessary messaging for the other side of the aisle. (WashPo)

Meanwhile, n news that is sadly not even shocking anymore, a Conservative leader has been accused of sexually assaulting a male staffer, because, again, everything they accuse liberals of is 100% projection. - (Jezebel)

One of the last times I saw you all, it wasn’t looking good for Bam Margera. He pulled through and talks about his hospitalization on Steve-O’s podcast. - (Variety)

Let’s get to know a bit more about 25-year-old Maxwell Alejandro Frost, the first member of Gen Z — and the first Afro-Cuban — elected to Congress. - (TV)

Is Modern Life Ruining Our Powers of Concentration? I’m sorry, what? I was distracted by a video on my phone… - (The Guardian)

For real, there’s going to be a History of the World PART II? - (TMS)

Van Leeuwen, makers of the limited-editions of Grey Poupon, Macaroni and Cheese, and Pizza ice cream flavors, have much tastier-sounding Winter 2023 offerings. I wonder if the King Cake pints will have a tiny, plastic baby in them? - (TIB)

Speaking of expensive food items, Cardi B. has noticed the emmereffing price increases in groceries and she has some effin’ sh*t to say about it. - (Lainey Gossip)

And she wore that same dress in a different color combination for this article. It’s a really good dress! - (CNN)

For 50 years, Schoolhouse Rock has taught us how a bill becomes a law and all about the function of a conjunction. - (Today)

Pieces parts of Spare are leaking and this bit about Kate Middleton losing her sh*t because Meghan Markle told her that Kate probably forgot something because she had “baby brain” is cracking me up! Do you think Kate thought Meghan was telling her she had a baby brain? Like a smoll, little, baby brain? Is “baby brain” an American saying? - (Celebitchy)

The whole “nepo baby” conversation is, frankly, boring to me. I don’t care. Maybe I should? I just don’t. That said, Tom Hanks thought he needed to add his two cents to the discussion, and, well, I don’t know that it was particularly helpful. - (DListed)

Ok, so I was under the impression that the police were overreacting about Veronica Tejera leaving her sleeping kids unattended in a hotel room while she rode in the ambulance with her dying husband, ABC News’ Dax Tejera. Evidently, the two of them left the kids alone while they were out having dinner, and then the ambulance trip occurred. - (Scary Mommy)


← Shoot Her Down, But She Won't Fall. 'M3GAN' Is Titanium | The True Story Behind '1923,' Teonna Rainwater, and Catholic Schools for Indigenous Children →