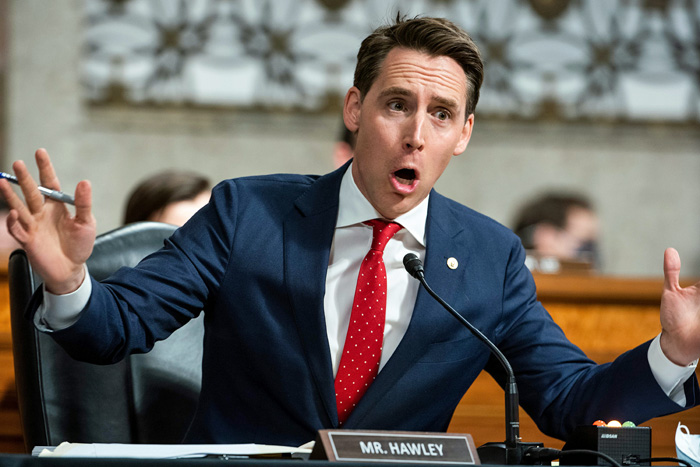 In a warning sign of things to come, Josh Hawley was a very vocal defender of militia movements directly after the Oklahoma City bombing. He also thought Mark Fuhrman was unfairly labeled as a racist. Of course. (Kansas City Star)

Bridgerton is getting a second season and Sarah has several questions about how exactly that’s going to work. (Lainey Gossip)

Kourtney Kardashian and Travis Barker might be a thing. (Dlisted)

Helena Bonham Carter on corsets: “There’s a lot to be said for it, really.” (Celebitchy)

Kyle Rittenhouse’s bail terms have been amended after a judge saw footage of him flashing “white power” signs at a bar. (The Root)

From Nicole: Universe, I’d love it if the Hilaria Baldwins, Rachel Dolezals, and Michelle Latimers of the world have this article shoved in front of their faces. (HuffPost)

People should stop writing parodies of both sideism, it’s too obvious at this point — oh wait this is real https://t.co/XfgosexvEe

From Roxana: This history of the Arrested Development $10 banana joke is very good, over at Mel Magazine. (Mel Magazine)

As one of his constituents, Scott Perry’s seditious ass needs to resign today. (PennLive)

Sophia picked up Liz Moore’s Long Bright River, because President Obama recommended it. The story of sisters who walk different paths, wrapped in the opioid crisis, it highlights the importance of mentors. "A high school history teacher and a policeman in an after school program drastically affect Mickey’s childhood and future." Whose book recommendations will you accept without question? (Cannonball Read 13)

I’m trying to do better on the pet content now that Trump is gone. Honest.

Indiana Jones and the Temple of the Forbidden Tum pic.twitter.com/xLHmNHqCNs