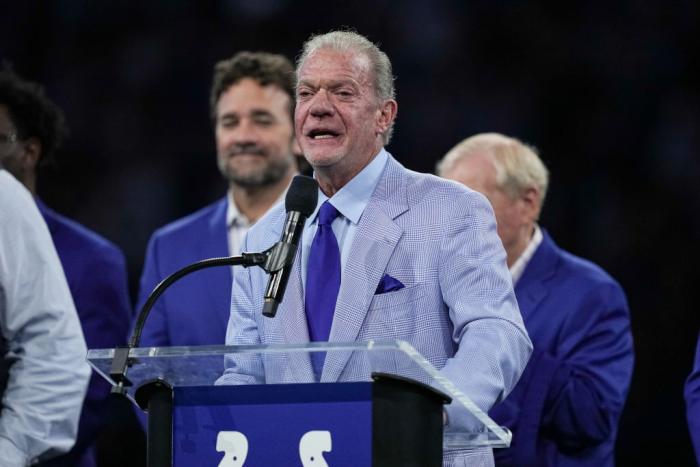 Don't Forget about the Fourth Wildest Story of the Week

It’s been a long, chaotic week full of wild stories. The week’s top story, of course, is that the Republican Red Wave did not materialize, and the fallout from that (including the brewing rivalry between Donald Trump and Ron DeSantis). The second wildest story of the week was Elon Musk’s chaotic reign over Twitter, the layoffs, the resignations, and the rollout and subsequent suspension of Twitter Blue. The third biggest story? The cratering of the crypto company FTX and the $16 billion fortune of its CEO, which was completely wiped out in 24 hours.

All of those stories were so insanely wild that many people may have completely missed the fourth craziest story of the week, which comes from the world of sports. The Indianapolis Colts, until recently, were one of the most successful NFL franchises of the last two decades, owing largely to two quarterbacks: Peyton Manning and Andrew Luck. The Colts were able to draft Luck in 2012 because Peyton Manning missed that season due to injury and the Colts were so awful that they were able to make the number one pick of the draft during a year in which Luck — like Manning — was one of those rare, generational quarterbacks. The Colts took Luck, released Manning (who won a Super Bowl in Denver), and lived happily ever after. For a while.

Everything was going well in Indianapolis until August 2019 when Andrew Luck unexpectedly decided to retire at the age of 29, in his prime, two weeks before the season was set to start. I have never respected an NFL player more. In the last several seasons, the Colts have tried to fill their hole at quarterback, but have repeatedly failed to do so. Without a good quarterback, it often doesn’t matter how good the rest of the team is, it’s never going to make a deep playoff run. The Colts were poised to make a deep playoff run the last two seasons but for the quarterback, including Carson Wentz, the anti-vax dolt who is so bad that he cost the Colts a chance to go into the playoffs last year despite a 93 percent chance to do so going into the last two weeks of the season.

That’s the context for what happened this week in Indianapolis. After a mediocre 3-3-1 start, the Colts inexplicably decided to bench Matt Ryan, the aging, borderline Hall of Fame quarterback they had signed in the offseason to replace Carson Wentz. The Colts at 3-3-1 still had a decent chance to make the playoffs. Most likely, however, with Matt Ryan at quarterback, the Colts probably would have finished in the middle of the pack. Teams that finish in the middle of the pack do not get to draft the best quarterbacks available next April.

Instead, they put in a kid named Sam Ehlinger. Ehlinger was drafted two years ago in the sixth round. He’d never thrown a pass in the NFL. Ehlinger is exactly the kind of guy who is drafted to have a relatively short career as a backup quarterback. Replacing Matt Ryan with Ehlinger made no sense … until it did.

Ehlinger played about as well as expected, which is to say: Terribly. After one week, Jim Irsay — the Colts owner — fired the offensive coordinator. After Ehlinger played miserably against the New England Patriots last week, Irsay fired the Colts coach, Frank Reich. Reich is genuinely one of the best, most respected coaches in the NFL. He was stuck with a terrible owner and a bad situation. At this point, it was clear that the Colts ownership is trying to tank the team so that they can draft a good quarterback.

Tanking is not technically allowed in the NFL, so in order to skirt around it, owners will occasionally put in a terrible quarterback, so no matter how good the rest of the team is, it’s futile. This is what Jim Irsay did the year the Colts “sucked for Luck” by leaving Curtis Painter in (Painter only threw 16 passes in the NFL after the Colts let him go). This year, they put in Ehlinger.

But here’s where it gets crazy: After Irsay fired Reich — who was only doing what Irsay asked him to do — the owner replaced him with a guy named Jeff Saturday. Jeff Saturday had zero coaching experience in either the NFL or the college ranks. He’d coached high school for a few seasons, but he wasn’t even particularly good there. Irsay skipped over two people on staff with years of head coaching experience, as well as everyone else in-house, and hired the guy who used to play center for the Colts when Peyton Manning was around.

By all accounts, Jeff Saturday is a good guy. He does not know how to coach an NFL team. Jim Irsay, however, is basically trying to convince the world that Saturday is the next Ted Lasso, and by naming him the “interim” head coach, Irsay is also able to skirt the Rooney rule, which would have otherwise required that he interview at least two people of color for the head coaching position. Instead, he handed one of the 32 most coveted coaching spots in the entire NFL to … a friend.

And who did Jeff Saturday hire to call the plays for the Colts this Sunday? A kid named Parks Frazier, a 30-year-old who was basically Frank Reich’s personal assistant for two years until he graduated to assistant quarterbacks coach. Frazier has never called a play at any level of his coaching career.

So, on Sunday, the Colts will start a quarterback who had never thrown a pass in the NFL two weeks ago, a coach with zero NFL experience, and a play caller who has never called a play before. But Irsay insists he’s not tanking. “That’s the most absurd thing I’ve ever heard, that we’re tanking,” Irsay told The Athletic. “That’s bulls—-. We’re in this thing; 9-7-1 get us in, no question about it. … We’re going to do what it takes to win. I don’t know who people think we are, they don’t know us. We don’t tank in Indianapolis.”


← In Praise of Quiet, Subtle Performances in Film | The USWNT Has Lost Three Straight Games For The First Time Since 1993 →