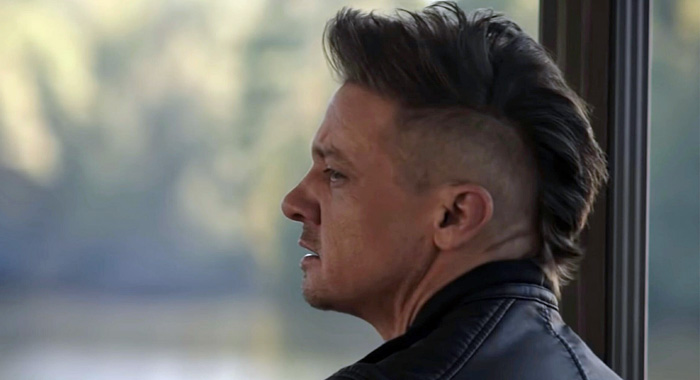 “Wanna know how I got these hairs?”

One of the less fantastic parts of Avengers: Endgame is when Jeremy Renner’s Hawkeye becomes Ronin, a sleeve-tatted, sword-wielding vigilante who channels his grief by trying to #BuildTheWall in Mexico — with bodies. But don’t worry, he also murders a bunch of Asian stereotypes, too, so this definitely wasn’t an awkward racial thing that should’ve been noticed right away. Iron Man’s best friend is black!

Anyway, considering everyone on the planet has seen Endgame at least 14 times by now, the smart move is to just pretend the whole Ronin thing didn’t happen and never, ever mention it again. Because despite the fact that Renner’s Hawkeye is the worst, there’s a surprising amount of goodwill building for his upcoming Disney+ series thanks to Marvel heavily implying that it will be influenced by Matt Fraction’s award-winning run. All they have to do is not bring up— oh goddammit.

Hawkeye will premiere on Disney+ in the fall of 2021. What’s more, it will see Clint Barton train Kate Bishop to become a “superhero without superpowers.”

Plus, it was also revealed that the series will feature more of Ronin’s backstory, the second superhero identity Clint Barton embraced in Avengers: Endgame.

Welp, so much for that. Then again, I’d be lying if I said I’m not intrigued at the prospect of watching Midlife Crisis Man try to convince a millennial that a bow and arrow makes total sense in a world where guns exist alongside magic aliens that shoot laser beams out of their face. It’s the only choice when you think about it.

KATE: Mister, can you skip to the part where you shoot me in the eye with an arrow? I’d really appreciate it.

CLINT: ♫ My favorite chips are Old Bay (nailed it) ♫

CLINT: (vapes) So where we?

KATE: You got drunk, kidnapped me and said, “You Catniss Evergreen now, bitch.”

CLINT: Haha, I quote movies now. Suck it, Tony. So the first part of being a superhero is that your whole family is gonna get murdered. I’m talking right in front of your face at the most random, emotional moment possible.

KATE: Oh my god, did that happen to you?

CLINT: Yeah, but they’re back now. Time travel or whatever. It’s not important. What’s important is do you ever listen to Ben Shapiro?

CLINT: He wins arguments with facts not feelings. It’s pretty great. Anyway, after your whole family gets murdered, you buy a dope sword. Hell, maybe even two dope swords if it’ll look sick with some sweet tats, you know what I mean? Then you find the real evil in the world and shove those swords into it.

KATE: What’s the real evil in the world?

CLINT: Not a fan of the Middle East if we’re being honest…

← The First Trailer for 'Zombieland: Double Tap' Heads to The White House | Before 'Once Upon a Time in Hollywood,' Let's Remember Sharon Tate →