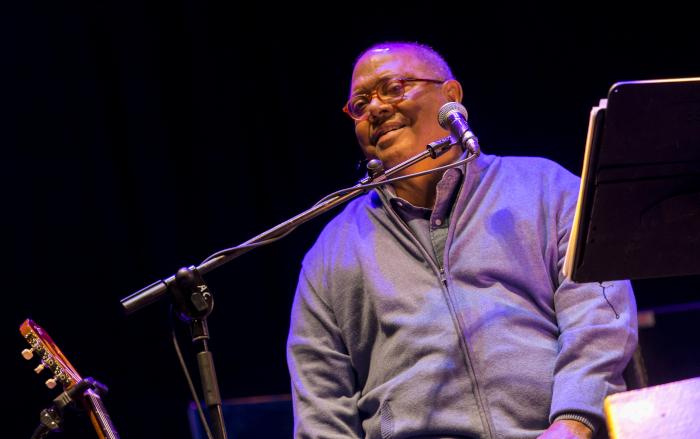 This is an obituary for a man most of you might not know about for reasons that are quite understandable. Pablo Milanés was one of the most beloved, influential, and popular singer-songwriters in the Spanish language, which in itself would reasonably limit the reach of his music. Pablo Milanés was a master of the lyrical and musical potential of the Spanish language (which makes sense considering some of its oldest written examples are Ibero-Arabic Kharjas poetry), and just like so many of his contemporaries, it is a pity that he is someone we mostly share among Spanish or Portuguese speakers.

Pablo Milanés was born in Bayamo, in Southern Cuba, in the very region where the Cuban Revolution would begin flaring up when he was a teenager. A child of Cuba’s legendary ecosystem of Arts Education and Conservatories, his youth was marked the double bind of being a staunch supporter of the Revolution and also a victim of its policies, being forced to work in brutal collectivist camps, but more so as a Black Man in a country that would never deconstruct its institutionalized racism. This is an important lesson on why the Authoritarian Left will often reproduce even more vulgar oppressive structures than it sought to replace. But his convictions and faith in the revolution persisted, and in his 20s, he acquainted himself with the wave of political and protest songwriting that was transforming Latin American music in the 60s, and in which he would become one of its towering figures. The Nueva Canción generations, one for each country in the Americas, would become the conduit for his natural drive to integrate all the musical legacies that were his heritage, music being Cuba’s biggest resource: Son, Jazz, Classic, Filin, Bolero, Tango, Folk, Rock. Along with Silvio Rodríguez and Noel Nicola, Pablo became one of the founding fathers of the Nueva Trova Cubana, Trova being one of the defining folk music genres of the island, a direct descendant of the tradition of Medieval troubadours. A malleable genre that is ready-made for their highly lyrical and layered approach to songwriting.

But if Silvio Rodríguez is usually characterized for the minimalism of his musical arrangements, Pablo Milanés went in the opposite direction, embracing a variety of styles and, in particular, probably becoming the best Bolero artist of all time. And this is where we talk, at last, about his music.

One core feature of his songs (and I’m using the present tense because it quite literally lives on) is their eartnestness, the proud nakedness with which he bared his mind and soul. Eartnestness can be risky when it comes to music. Because eartnestness can make an idea or verse simplistic, naïve and, eventually, dated. This is the worst thing that can happen to a song, whether it’s about politics, love or your inner life. If a song is an idea, the fact that it fails to resonate in every future present means that you did not have a worthwhile idea. It was just not intelligent, insightful or poignant enough. That’s why “Imagine” is so irritating even when not sung by celebrities in mansion-lockdown, or why The Little Prince can be so gak-worthy. What they both lack is what Pablo Milanés had in droves: A firm connection with the material world, historical materialism, and a sense of where you are in history and what your purpose could be, beyond wasteful daydreaming. There is no need to lose your romanticism and emotiveness in the process.

Pablo Milanés sang for the Left from the Left. Unwaveringly committed to the Revolution, to the ideals of wiping out human-on-human oppression and of a New Humanity, he was also unfailing and vocal in condemning the Cuban regime’s human rights abuses, supporting the protests that took place last year. In that way, he made sure that his foundational collection of protest songs (some with titles as straight-forward as “Song for the Union of Latin America” or “To Salvador Allende in His Fight for Life”) will still be, to quote Victor Jara, new songs.

Within the Left, we have an issue with emotions. The critical apparatus we use to re-examine everything taken for granted tends to make us suspicious or questioning of things like emotiveness, romanticism, passion, joy, etc. Many times, those things do need to be interrogated, but in the exercise of doing so, we compartmentalize it away out of fear it could weaken our resolve and our critical thinking skills. And at the same time, there is a movement in the opposite direction in which an shapeless and aimless Leftist spirit drives many of us to just … react. To be Leftists in pure emotion and to define our identity from pure opposition and through heroes and works that will, inevitably, disappoint us. Pablo Milanés, in his music, discovered the best of both worlds. The insightfulness and clarity of Silvio Rodríguez lyrics with the emotions, pomp and scale of the Caribbean Sounds.

At once he could create one of the most heartbreaking songs about seeing Chile fall into a fascist dictatorship (with the hope that he -and the exilees- would return one day), then a song about making life worth it by investing it in improving the lives of others, followed by a breezy Son about his love for Cuba and his dreading of “solid land” (though ironically, he lived his final years in Spain), closed by a lullaby for his young adult daughter. His discography is an emotional education which, I hope, will one day be translated in English via bilingüal edition.


One more thing is how Pablo wrote about and for women. The biggest pitfall in all traditions of Spanish-language music is its tendency to objectify women, either in the crassest way or, worse still, by putting them onto pedestals. But not Pablo’s songs. If you have already clicked on the embedded videos, you might realize he didn’t lack for love affairs, but when he sings for women, he sings to fully formed, tangible persons, women that he realizes, in the thesis-counterthesis-synthesis-conclusion structure of many of his love songs, are individuals over which he cannot have ownership, and that’s how it should be.


And one final thing more: Look, I love Luis Miguel as much as any other person. But Pablo Milanés covers of Bolero and Tango Standards are The Definitive ones. LuisMi clearly loves those classics, but Pablo inhabited them.


If you were raised in a Leftist family anywhere in Latin America or Spain, Pablo Milanés was part of your life’s soundtrack (including your conception), a tradition we’ll gladly continue for you Pablito, because you are our identity.

Alberto Cox recommends you start with Milanés concert albums instead of compilations. What are Concert albums if not The Best/Greatest Hits records but with effort put into them.


← 'Bar Fight' is Barely a Film That Gets Barely a Review | Can 'Grey's Anatomy' Survive Without [Meredith] Grey? →