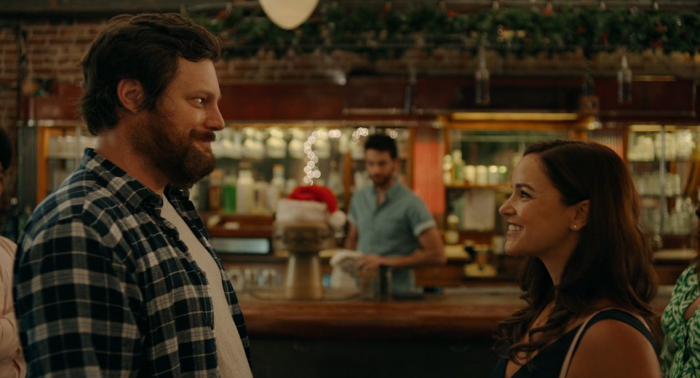 'Bar Fight' is Barely a Film That Gets Barely a Review

There’s this short video that came out a little while ago, of an interview with Ethan Hawke, in which he talks about human creativity, art, and acting. You can find the full video here, but there is an abridged version that contains my favourite part. It’s the part that most often makes the rounds on social media, and rightfully so, because in addressing the nature of art, Hawke hits the nail so squarely on the head that his formulation of what art is has been echoing around in my head since I first heard it:


Most people, Hawke says, don’t spend too much time thinking about art. About, say, poetry. They’re busy, and stressed, and have a life to live. They focus on the things directly in front of them, and art fades into the background. That is, Hawke says, until something happens in their life. Someone breaks their heart, or a parent dies, or another emotional extreme hits. It’s at that point, as Hawke so memorably puts it, that art stops being optional:

All of a sudden you’re desperate for making sense of this life. Has anybody ever felt this bad before. How did they come out of this cloud? Or the inverse, something great: You meet somebody and your heart explodes. You love them so much you can’t even see straight. You’re dizzy. Did anybody feel like this before? What is happening to me? And that’s when art’s not a luxury, it’s actually sustenance. We need it.

I just love that so much. It rings so true and it fights back in slashes of color against the jaded monochrome of getting older and losing the belief in the magic of art that burns so bright in you when you’re younger. No, it says, art does matter, and there is wonderful stuff out there, don’t let the jackbooted thugs of modern capitalist cinema drain you of hope!

It’s not exactly what you would class alongside the stuff that gives life meaning.

It’s not even good, really.

There’s a phrase I’ll always remember back from Charlie Brooker’s earlier writing—back from before he became a weird centrist melt—which he used to describe things that were bad in a particularly bland, inoffensive way: ‘Scarcely detectable kitten fart.’ That about sums up Bar Fight, a film that—make no mistake—is very bad in all the ways that films are either good or bad, but which I can’t really get mad at, because it sort of drifted across my consciousness, mostly without incident. Yeah, sure, I wasn’t happy about wasting an hour and a half of my life (okay, eighty-four minutes, thank you, Bar Fight) watching this thing, but at least it didn’t actively make me angry with its badness.


And I’m sorry, Bar Fight, I know I should get into the actual meat of a film review here—it’s been long enough already for god’s sake—but I have to take one more detour.

Because now that I’ve mentioned films that actively make you angry: Bullet Train. Dear god. I watched this thing the day before I watched Bar Fight, and what a stupendously huge piece of sh*t that is. Overwrought, overlong, incoherent, terribly acted, horribly written, and just so incredibly smug and pleased with itself. I laughed once, when the glorious Channing Tatum showed up to do his Channing Tatum thing very briefly, but other than that I was a boiling kettle of rage. Bullet Train was so bad, that for the first five or ten minutes of Bar Fight I was convinced I was watching a good film, just because it wasn’t Bullet Train.

Sadly, that illusion vanished pretty quickly. Bar Fight is barely a film. It stars Melissa Fumero as Nina and Luka Jones as Allen, a long-term couple who have recently undergone an aberrantly amicable split, who will soon find out that even the friendliest breakup is likely to hit a point of contention somewhere. For Nina and Allen, it is their favorite bar, at which they have both been beloved regulars. Now, going forward, they know that only one them will get to keep it—for some reason. And so we enter a night of shenanigans, involving Nina, Allen, and the bar’s cast of ‘colorful character’ staff, as they embark on a series of competitions to see who will emerge the victor, getting to remain a customer of an aggressively bland-looking bar that I’d walk out of immediately after walking in, Abe Simpson style.

Bar Fight didn’t have to be particularly good, and I would’ve liked it. It has two of my favorite storytelling elements woven into its structure: It takes place in a bar, and it takes place over one night. Unfortunately, nothing works here. The characters don’t make sense. The emotional arc is minimal and poorly executed. The pathos falls flat. The ‘jokes’ seem uninterested in themselves. I’ll be fair: Melissa Fumero tries to inject some life into things, as does Rachel Bloom in a supporting role, and this is director Jim Mahoney’s first film, but that’s about it. Bar Fight is barely a film, so I guess it’s fitting that it receives this barely-a-review.

Bar Fight is available for digital rental in all the usual places.


← 'Glass Onion' (The Knives Out Sequel) Is Rian Johnson's Whodunit Reaction to Our Hellish Reality | Pablo Milanés 1943-2022: The Heart Beats on the Left →