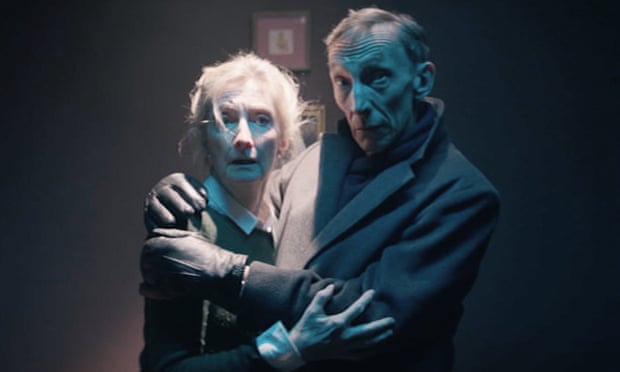 Now on Shudder: 'Anything For Jackson' Offers A Frightening And Fun Allegory About Trump Voters

Horror movies about cults focus on the victims of the sinister sects, almost religiously. Consider Rosemary’s Baby, The Wicker Man, Ready or Not, Black Christmas (2020), Doctor Sleep, The Invitation, Satanic Panic, The House of the Devil, Get Out, and Kindred. Cult horror offers a wide range in stories and styles, yet again and again ties us to the journey of the Final Girl (or Wicker Man) fighting for their life and soul. Into this terrifying tradition comes Anything for Jackson, a sensationally spooky offering with a hilariously unexpected source and a timely political allegory.

You probably don’t know director Justin G. Dyck by name, that is unless you’re a huge fan of made-for-TV holiday flicks like Operation Christmas List, Christmas with a View, Christmas With a Prince, and Christmas in the Rockies, which recently scored headlines announcing cameos from FOX & Friends co-hosts Steve Doocy and Ainsley Earhardt. With such work being the bulk of his filmography, Dyck might seem an unlikely pick to helm a creepy horror film. Yet Anything for Jackson makes clear what a fan of the genre Dyck is, as its rich in mood, scares, and subtle nods to phenomenal thrills from the past.

Written by Keith Cooper, Anything for Jackson centers on a happily married couple, nearing retirement and eager to make the most of it. For Audrey (Sheila McCarthy) and Henry Walsh (Julian Richings), that means employing an ancient demon summoning ritual to resurrect their dead grandson for a second chance at a happy home. Thus, this sweet elderly couple abducts a pregnant neighbor, Becker (Konstantina Mantelos), with plans to conduct a Santanist ritual that will put the soul of their dear boy into the body of her unborn child. They chain Becker to the guest room bed, force-fed her prenatal vitamins, and beg her not to make them feel bad about their decision, because they have feelings too! But they will do anything for Jackson.

As thoughtfully as the Walshes plotted, complications soon crop up for which they did not plan. Not only are the police sniffing about because of a thoughtless slip of Henry’s tongue, but also other tormented spirits are crawling through the portal to terrorize the living! Here, a select yet scary group of ghouls are rolled out, frightening yet familiar. Some at first seem mundane, a grandma in a nightgown, a small child in a bedsheet ghost costume. Then, comes a twist that makes them unholy terrors. Others are unnerving from their first strangled breath or cringe-inducing contortion. Still, more will be made as the Walshes scramble to complete the resurrection ceremony by seeking help from a sketchy Satan worshipper (Josh Cruddas), whose every twitch and utterance is a red flag.

By focusing on the Walshes instead of Becker’s struggle to survive, Anything for Jackson examines toxic entitlement. The Walshes preach repeatedly to their victim, this is an act of love, as if that excuses their acts of violation or justifies their selfishness. Now, this is not a couple that seems remotely deranged to the outside world. Audrey is a warm old woman with a soft voice and a sincere smile. Henry is a respected doctor, in fact, he’s Becker’s doctor. Rather than wasting scads of screentime on the same tired statement that “normal” seeming people can be monsters, Cooper’s script cuts to the chase by having them kidnap Becker in the very first scene! From there, their dark truth is exposed, but the sweet side remains—because they are sincere! They don’t want to hurt Becker or her baby, they just want Jackson back. However, their self-proclaimed good intentions doesn’t mean there won’t be pain, madness, and death.

You might think the filmmaker behind a FOX Nation Christmas special would make these Satanists outright villains. However, Anything for Jackson displays the complexity of the Walshes, from their kindness to patients and neighbor, to their irrational wish to maybe even Becker as a member of their family, to their deep grief and dangerous blind spots. It does not; however, make excuses for them. There’s a smirking edge of humor that cuts through the film, serving up the jarring dissonance of the Walshes domestic every day with their evil supernatural aims. Sure, they’ve got a dead kid running around with spirits determined to unleash hell. But also, maybe Audrey will bake some cookies while they wait for the effects to kick in? Becker’s feeling peckish—and Jackson always loved grandma’s cookies!

Unhinged menace mixed with the sweetly mundane makes the film feel very tapped into the mood of 2020.

In this way, Anything For Jackson seems a warning for exactly the people who might rush to watch the Fox News holiday rom-com. It’s a story of a wealthy, white, straight couple, who have a nice home, had a decent life, but cannot accept something not going their way. They want it all. To take what they believe they deserve, they will break the Hippocratic Oath, the laws of society, the commandments of God, and even their own promises. Their actions lead to the world around them becoming a hellscape of their own making. Yet, they press on, following a ranting madman—with a strangely familiarly combover—as he charges down a clear path to doom. They’re too blind to their own desires to consider the consequences. Yet, they will not be the only ones who pay.

Politics aside, Anything For Jackson is satisfyingly scary. With a sophisticated production design, Dyck leans into the claustrophobic feel of great haunted house horror, turning the Walshes’ lovely home into a castle of dark corners and darker secrets. The story leaps back and forth from before the abduction and after, filling in exposition gaps, but also revealing how slippery their slope is from a bit of spilled blood to a human sacrifice. Through this is woven the elegant humor, which doesn’t make light of the movie’s horror but deepens it, becoming a foil that urges us to question every warm smile on this world. Or at least those from 55% of white women.

A crackling cast collides in intensity and earnestness for a film that feels just to the right of real. Dyck’s mindful use of practical effects keeps the frights grounded, and gives a greater texture to the crumbling wall between the living and the damned. Cinematography rapturous in its use of soft lighting and swallowing shadows creates an enveloping atmosphere. While the story feels fractured and frenzied, that clicks into place as it reflects the Walshes losing the control they thought they had over the world. All this makes for a horror film that is not just sickeningly entertaining, but disturbingly relevant.

Anything for Jackson is now on Shudder.

← Colbert Helps White House Celebrate Its COVID Christmas | There's One Way to Cover a Song, and Then There's the Other Way →