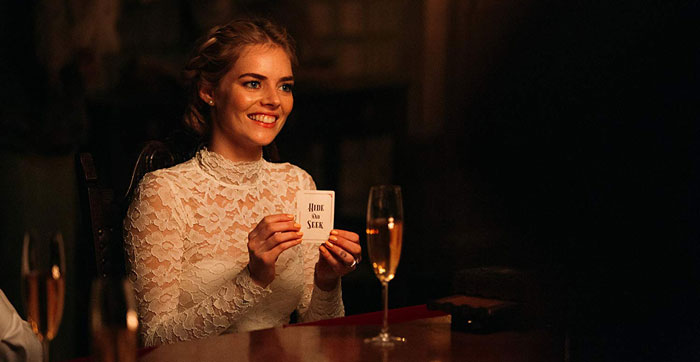 'Ready Or Not' Review: A Bloody Crowdpleaser With Operatic Horror And Dark Laughs

Wedding season is coming to a big, bloody close with the horror-comedy Ready Or Not. Samara Weaving stars as a beautiful bride whose dream wedding turns into a total nightmare when she’s subjected to the twisted traditions of her very rich and very out-there in-laws. If you’re looking for a movie to buck off the summer doldrums or convince your significant other that marriage is for suckers, Ready Or Not is for you!

Directed by Matt Bettinelli-Olpin and Tyler Gillett, Ready Or Not takes place on the sprawling estate of the Le Domas family, who made their enormous fortune through manufacturing board games. As such, once Grace (Weaving) marries beloved son Alex Le Domas (Mark O’Brien), she must join the family for a fateful game night. What game? That’s up to the luck of the draw. It could have been chess or backgammon or Old Maid. But, Grace has the bad luck to draw “Hide and Seek,” kicking off a deadly ritual that pits the whole Le Domas family against her. She must hide until dawn. If they find her, they will kill her. They have crossbows, guns, and a battle-ax-wielding battle-ax called Aunt Helene (the scowling and hilariously ferocious Nicky Guadagni). All Grace has are her wits and a wedding dress that will help and hurt her throughout the game.

At first blush, the premise might seem like another spin on Richard Connell’s “The Most Dangerous Game,” in which an aristocrat decides hunting men is the best sport, but Ready or Not breaks away with some ghoulish innovations. For one thing, the Le Domas family isn’t hunting Grace for kicks or even because some of them think their Golden Boy has married a “gold-digging whore.” They do it because of what they fear will happen if they don’t. Superstition teases the possibility of the supernatural coming into play in this game, which brews a feral tension as Grace barrels through to an explosive finale. Along the way, there will be scorching confrontations, deadly mishaps, and the kind of gleeful violence that makes horror lovers cheer! (There was MUCH clapping and cheering at the film’s Special Advance Screening at Fantasia International Film Festival. And meowing. It’s a Fantasia thing.)

On top of all that, the script by Guy Busick and Ryan Murphy (not the Glee one) crackles with humor. It’s grounded with Grace, a bride who’s less blushing and more brassy. She cusses. She cackles. She prefers dirty sneakers to designer heels. And when she screams, it’s not in the squall of helpless terror common to horror, but something more guttural and thrilling. As she’s hiding, fleeing, and fighting for her life, Weaving’s scream begins to form a language of its own, one of rage, agony, and savage defiance. But before all that, she’s charmingly cracking jokes with her grinning groom and his drunken brother (Adam Brody as a debonair, drunken scoundrel). However, most of the laughs in Ready or Not come from a darker place.

In a breathless moment between attempts on her life, Grace is in shock over this post-nuptial tradition. To which her in-the-know husband shrugs off the blame by quipping, “You wanted to get married.” A similarly comical ruthlessness is embodied by the aforementioned Aunt Helene, who is styled like a live-action Ursula the sea witch. At their wedding, she pairs her deep purple cloak with a severe sneer. Her hair is a crown of white spikes, while her eyebrows are shaved off then draw on as hard, black arches that give her the perpetual expression of deep disdain. She has no patience for niceties or even her family, greeting a late-arriving Emilie (Melanie Scrofano as a madcap party girl) with a low growl of, “Brown-haired niece, you continue to exist.” This is the kind of humor at play in this horror-comedy, along with the occasional punch of outlandish violence that’s inflicted on the hunted, the hunters, and the maids—some clueless, some complicit—whose peculiar uniforms seem plucked from Robert Palmer’s “Addicted to Love” music video.

This brings us back to the class conflict that throbs at the core of Ready or Not. The affluent Le Domas family will do anything to protect their own and their empire. There are snobs among them who assume the worst of Grace because she’s not a “blue blood,” but instead a foster kid with no lineage, no affluence, and no status. However, ahead of the wedding, their matriarch (Andie MacDowell) warmly welcomes her with a caramel-coated speech about how she too came from a lower class, yet she found her place and real family in this clan. Alex’s sister-in-law Charity (a sleek and steely Elyse Levesque) also comes from a much humbler background, one that’s implied to be so harrowing she dare not breathe a word of its details. This plays as justification on why she’d hunt Grace, to whose struggle she could relate, “I’d rather be dead than lose all this.”

Amid its horror and humor, Ready Or Not explores how wealth and poverty pervert the human soul. Those who’ve had nothing would rather be dead than return to that. Those who have it all will kill to keep it. And in between are those forced to play the game. (Spoiler: the real evil is capitalism!) Then, there are layers about family, how the ties that bind can be throttling and how horrendous behavior can be normalized at home. (“You’ll do pretty much anything if your family says it’s okay.”) Because the script gives personality and motivation to every member of the eccentric Le Domas ensemble, every scene is alive with stakes that sing. In short, there’s much more to Ready Or Not than operatic horror fun. Though it’d be criminal to sell that short.

Bettinelli-Olpin and Gillett show an expert understanding of audience anticipation and desire. They’ll lay in a shot of a protruding nail, then make us wait, wait, wait to see the damage we know it will do. The stomach-churning thrill is in the waiting. The reveal becomes a horrid release, punctuated by yelps onscreen and off. In this way, the directors play the audience like a fiddle. Throughout the film, the packed house of the Théâtre Hall gasped, laughed and screamed in unison, as if we were a chorus being directed by a macabre conductor. As the film reached its raucous conclusion, we were left ragged, exhilarated, and in awe. Or, as I said on Twitter, Ready Or Not f*cking rocks.

← On Trying, and Failing, To Deal With Climate Anxiety | 'I'm Sorry Dave': The Fracture Point Upon Which the AI Revolution Can Begin →