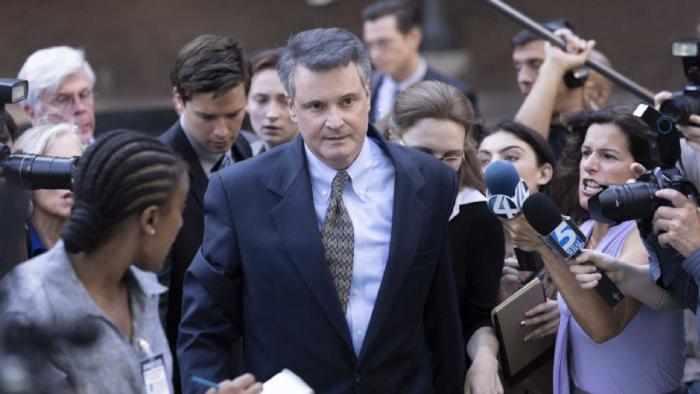 Why Are We So Obsessed With The Staircase Murder?

Some crimes are guaranteed to incite obsession. Our societal morbidity has helped to turn the formerly niche and unabashedly tawdry true-crime genre into a prestigious and profitable commodity. Over the past decade or so, we’ve moved on from the world of worn paperbacks and Forensic Files reruns to a well-oiled machine of glossy docudramas, fandom-inspiring podcasts, and cutesy merchandise. Admitting you know way too much about a certain murder is more likely these days to elicit cries of solidarity than those of scorn. 2022 is only five months in and already it seems as though we’re swamped by the sheer glut of new true-crime offerings. This time, however, they’re mostly taking the form of impeccably manicured dramatic adaptations: The Girl from Plainville, The Dropout, Inventing Anna, and now, The Staircase.

In 2004, the Oscar-winning French filmmaker Jean-Xavier de Lestrade released Soupçons, an eight-part docuseries on the trial of Michael Peterson, an American novelist convicted of murdering his wife, Kathleen Peterson. It won a Peabody Award and was heralded by many as the greatest piece of true crime since The Thin Blue Line. The Peterson case had all of the ingredients for an instantly addictive murder drama: a wealthy couple with a seemingly perfect life; a violent death; revelations of secret lives and compulsive lies; a second possibly connected death from long ago; and owls.

Lestrade’s docuseries pushed the case into the mainstream and became an instant hit. When Netflix made it more easily accessible for viewing in 2018 (and added new content), The Staircase received a second wave of critical and audience obsession. It is, indeed, an excellent piece of work, an extremely methodical study of a curious incident from a filmmaker who has a strong grasp on his material and the benefit of seemingly endless reels of first-hand footage. There is a curious ambivalence to it that turned off many viewers hoping to be presented with a neat resolution to Kathleen Peterson’s death. Since then, the theories have run rampant, and now, HBO Max is building upon the infamous case further with its adaptation, featuring Colin Firth and Toni Collette as the Petersons.

This new series not only adapts Lestrade’s docudrama but adds that extra layer of Lestrade and his crew’s omnipresence in Peterson’s life during the trial. It’s one way to justify the existence of a show that has left many critics feeling fatigued with the true-crime industrial complex, myself included. And yet, it’s tough to deny that the Peterson case continues to enthrall the masses. The years-long hunt for answers ended with Peterson free after time served and entering an Alford Plea (a way for a defendant to assert their innocence while submitting a guilty plea because they accept that there’s enough evidence to convict them.) We still technically don’t have answers to Kathleen’s death, and the lack of proper resolution fuels many a Reddit thread of outlandish speculation.

One of the things that Lestrade’s series does so well, in part because of the sheer amount of access he had to Peterson and his legal team, is reveal the detailed construction of both a prosecution and defense case. The minutiae of their mutual investigations veers from mundane to ridiculous. The trial brought to light growing suspicions around the passing of Elizabeth Ratliff, a family friend whose daughters Peterson later adopted, several years prior. Much was made about Peterson’s bisexuality, the questionable forensic field of blood-spatter analysis, and the theory that Kathleen fell to her death after being attacked by a wild owl. Everything about the Peterson case felt so perfectly tuned to create maximum drama, the kind of shock and awe that, if it hadn’t actually happened, would have been the stuff of gripping fiction. Here was a group of privileged people whose scandals were revealed to all with such detail and curiosity that it felt primed for consumption.

We’re drawn to murder. There’s a reason that the most fawned over true-crime properties tend to focus on it, from The Thin Blue Line to Serial (I think scammer-related stuff has overtaken it in recent years but that feels fleeting in comparison to the stronghold of murder content.) The genre has always been something of a safe haven for us to explore our taboo morbidities in a reasonable manner. At its best, true crime allows us to dig into our insecurities and find deeper context for them. Women have flocked to true crime for decades because it simultaneously confirms our deepest fears and lets us confront them with knowledge and awareness. Well, that’s the plan. Instead, it often feels as though the media cycle of murder shows, podcasts, memes, and adaptations are blinding us to our own penchant for fetish. And The Staircase is nothing if not embedded in those recesses, even if Lestrade doesn’t indulge them all that often.

I’ve talked before about my issues with Netflix’s true crime assembly line and how it vaguely conceals its luridness with the cinematographic sheen of respectability. If it looks fancy enough, like ‘real’ TV, then surely one can overlook the tonal inconsistencies and blatant exploitation? Say something is prestigious enough times and it sticks, even when you revel in crime scene photographs and tacky recreations. This is something that, despite not being a Netflix original, I think about a lot with The Staircase. It helped to pave the way for the new era of true crime, thanks to a combination of agonizing detail, journalistic distance, and a keen eye for character. I doubt Lestrade knew what would follow in his footsteps, combining his serious focus with the brash callousness of many a leering Google search.

So, it doesn’t surprise me that this latest dramatization of The Staircase seems eager to turn its focus back on its audience and examine what made people obsess over it so much to begin with. We see an excruciatingly full-on scene of Kathleen stumbling down the stairs and dying, calling for help as blood seeps out of her shaking body. In a later episode, we see this moment recreated, but from the perspective of it being a murder rather than an accident. Various critics have already noted how tough it is to watch this scene. Richard Lawson of Vanity Fair described it as being ‘as gruesome as anything I’ve seen on screen in quite a long time.’ Combined with the inclusion of the documentary team trailing Peterson as he prepares for trial, it feels like this new take on The Staircase wants to make us confront our own curiosity about this story. We know so much, too much, about this case, and isn’t that kind of weird?

With so many instances of true crime, the painful reality of these cases become casual jokes. Netflix has leaned in hard on the memeification of its programming, as evidenced by the flurry of tasteless gags it pushed during the Tiger King fad that made a hero out of a convicted criminal and animal killer. YouTube is full of amateur body language experts and ASMR accounts dedicated to dissecting such criminal reports into cozy digestible content. I’ve seen multiple people wearing ‘Stay sexy and don’t get murdered’ merchandise. This is its own industry, and through its endless distillations, we lose the real humans at its heart. Perhaps that’s why the new version of The Staircase forces viewers to confront the violence of Kathleen Peterson’s death. Whether it was murder or an accident, a woman was left in agonizing pain and that’s been forgotten as people offer theories about owl DNA, bisexual affairs, and possible weapons use. Of course, that also opens up the door to further exploitation: at what point does showing the pain become a gory plus for our tendencies?


← Review: 'On The Count Of Three' Just About Pulls Off the Tonal High-Wire Act It Needs To | 5 Shows After Dark: 'The Resident' Fifth Season Finale, 'Black Gold' Premiere Paramount+ →