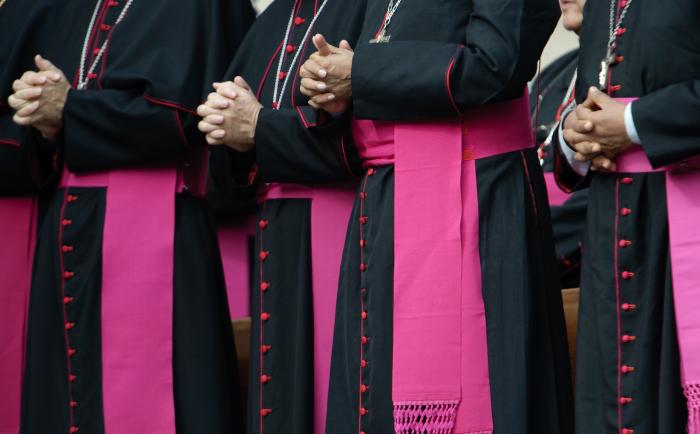 Who would win: A Bishop’s Celibacy Vows or an Erotica Writer. Let’s Find Out!

Kayleigh is gonna love this one.

One of the most disheartening things about the Catholic church is that a priest is more likely to face immediate, career-ending consequences if caught having a romance with a woman than if he’s credibly accused of molesting children. Don’t even ask about a gay affair. This is not surprising for an institution which, from its middle management and upwards, has been obsessed with form over content for the last 2,000 years.

Priests leaving the frock for a woman is not uncommon, but a bishop? That’s a new level. Being familiar with how the Church’s curias operate, I can tell you that no one becomes a bishop because they don’t want to. You wouldn’t throw that career path down the drain for just a fling, it has to be an affair for the ages.

The Diocese of Solsona is located in Catalonia, some 90 kms from Barcelona, in the province of Lleida. In 2010, Xavier Novell i Gomà was named its bishop at age 41, which is insanely young for a bishop — it’s like being tenured at age 29.

He was known as a rebel of sorts. When he was in the seminary, back in 1995, he publicly supported optional celibacy and ordaining women. More recently, he showed his support for the Catalonian independence movement by voting in the referendum of 2017, which in itself was a political act considering the way the procés was stomped by the Spanish government. Later, he would visit the imprisoned leaders of the movement.

But other than that, somewhere in between his crazy 1990s and being named bishop, he mutated… into what we are used to expecting from most bishops. According to this article by Francesc Valls at El País, the mounting atmospheric pressure at each higher ecclesiastical ring has a way of molding and blunting individuality: He became yet another authoritarian and traditionalist church leader: He supported gay conversion therapy, went about the tired refrain of abortion as the ultimate genocide and, perhaps foretelling what was to come, he started hosting courses in exorcism and demonology. To say his “program” wasn’t well received is being quaint. The province of Lleida leans to the left in general and is overwhelmingly republican and anti-clerical. He was named persona non-grata by the town of Cervera, deep within his own Diocese.

You might wonder if the suppressed iconoclast from his youth fueled his tenure, in one of those scenarios where his original drive towards changing things were reversed into a dark energy. The energy of the young is not all about hormones and chasing booty, it can also power higher searches. However, if you have suppressed the energy of young idealism and your sex drive, because of age and the ecosystem you play to, it could happen that lowly horniness, when reactivated, might arouse the other passions. Enter Silvia Caballol.

I feel a little bit guilty about calling her by her name. Technically, she is not a public figure as Novell is. But her identity was made public long ago by more reputable sources than I. And damn it, she is what makes this story interesting.

She’s a psychologist from Barcelona, a single mother of two, with studies in Catholicism, Islam, sexology and yoga. So, basically, a Millennial European woman. But here’s the chef’s kiss, the cherry on top and the thing I spoiled in the title: She has written four very erotic, very… unique novels. A self-described fan of romance and erotic literature, her first work is called Amnesiac Trilogy, three novellas about a psychologist that falls in love with his amnesiac, teenage patient. Human trafficking is involved and a lot of psychological theory. Her latest is called The Hell of Gabriel’s Lust: The First Deadly Sin Against the Being (as awkwardly worded in Spanish too), about the affair between an institutionalized psychopath and his psychologist (sounds familiar), who may or may not be a demon and an angel respectively. There’s a lot of theology lingo in the blurb. What’s that, you want a sample? Fine (translated from the linked article) VERY NSFW: “… while the water caresses my naked body, I balance my hips so that my penis fits against my hand, in the shape of a ring, simulating her vagina”. Yes, this is very much the erotica you’d expect from someone with academic titles up the wazoo. Now, these are not what you might call mainstream publications, they are very close to self-publishing. But one in ten people in Barcelona are aspiring writers, and the remaining nine are editors.

There is no information about when and how they met, but there is no way it doesn’t involve the stern and cold bishop being swept of his feet by a confident and liberated modern woman, with a meet-cute that included a heated debate about the nature of evil and gnostic gospels. I’ll let you fill in the gaps for your own fanfic. Novell resigned and requested an official dispensation from his vows to the Holy See, so that he can remain a part of the church. Yep, the consequences are that fucked up. Luckily, he can fall back in his degree in agronomy.

Is celibacy for priests a cruel and pointless exercise? When I was preparing for my first communion, I heard an argument for celibacy that made a damn lot of sense: The workload and duties of a priest are not friendly to family life. One of my uncles is a priest, and I can tell you for a fact there would be no space in his life for a wife and children of his own. But then again, that’s also the case with vicars, preachers, rabbis and imams, and they’ve managed for centuries. Well, the other problem is that you can’t support a family under the current economic structure of priesthood. If priests and nuns live in communities it’s also because of economies of scale. Celibacy is a problem that won’t be solved anytime soon.

Personal anecdote: The priest that baptized me also left the frock for his own Phoebe Waller-Bridge. I’ll stick to my mum’s own myth-making and agree that he wanted to become a dad after seeing me, being such a cute baby. Me: 1, Vatican: 0.


← 'The Matrix 4: Resurrections' Teaser Promises Us John Wick Vs. the Machines | Check Out the Stacked Cast in the Trailer for Adam McKay's 'Don't Look Up' →