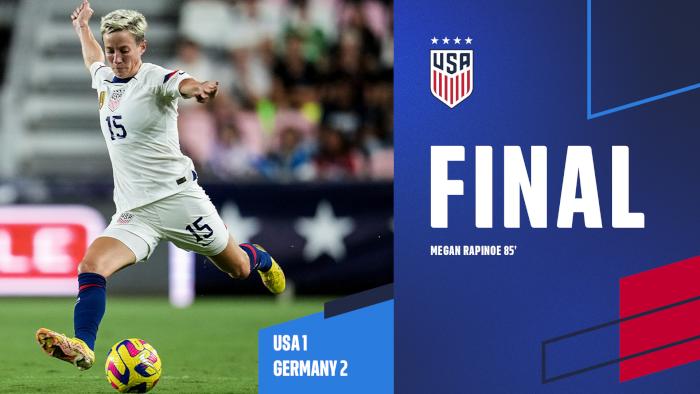 We said it might happen and now it has. 0-3 in the last three. Fans in an uproar over the lack of a midfield. Internet provocateurs chronicling the lack of finishing. Children, presumably, crying in the streets.

So why am I somehow less worried than before?

I suppose part of it is the fact that the youth of America is voting blue, and helped save democracy in an election that stood for something. That’s probably the first reason. Once you don’t have the specter of imminent collapse hanging over your head, it’s easier to put things like sporting events in the proper tier of importance.

The rest of it was that the US looked really good. Yes, they lost. That’s a fact. It’s the first time they’ve been beaten on American soil in 71 games. That’s a crazy stat. And yes, they were messy and lacked form in several places. But they were also robbed on one of the most blatant fouls in the box in recent memory and VAR would have given the US a penalty shot for their trouble. No VAR in friendlies means they just play on, but there’s a decent chance that would have tallied the equalizer.

The game itself was refreshing to watch if only because it was against the appropriate level of opponent. Endless matches against bunkering opponents haven’t taught the USWNT much, but the last three losses to England, Spain’s B-team, and now Deutschland have knocked the stars out of the younger player’s eyes. There is no manifest destiny in Women’s Futbol. You don’t automatically win just because you’re from the US of A.

The game itself was a battle of position, and it was a thrill to see the recovery and situational awareness of Martina Voss-Tecklenburg’s side. She has this team playing smart and tight with the hallmark discipline that has long been the brand of German soccer.

Germany came out firing and it was shocking to see the United States on their heels for the first few minutes. But then, the tide slowly began to turn, and gradually began to shift to the opponent’s side of the pitch.


Germany’s first goal came at the 51st minute, on a bizarre deflection off of US goalkeeper Casey Murphy, who had an otherwise solid game.

Germany takes the 1-0 lead over the USWNT in Florida 🇩🇪 pic.twitter.com/yzngnbTM5k


The USWNT tied it up with a nothing-but-hustle play in the 84th minute by wily vet Alex Morgan feeding a perfect cross to wily vet Megan Rapinoe, who buries it.

For the first time since 1993, the USWNT lose three games in a row.


Germany’s final score came almost to the 89th minute of regulation, on a brilliant individual play and a rock-solid finish.

Germany is back on top 2-1 🇩🇪 pic.twitter.com/1Lx4lxoKuw

It’s a 1-2 loss for the USA, but in all honesty, I’m less worried now than I was after the Spain loss. Is Vlatko the right person for the job? I don’t know and sometimes it really seems like a no, but this performance was actually quite good by the Americans. Looking at the stats from the game, there’s a lot to like.


In addition, we got to see peak performances by two American stalwarts: Lindsay Horan and Rose Lavelle.

Lindsay Horan had a powerful offensive performance out there yesterday. Her header that missed wide came on such an impossibly difficult to time dead sprint and ricocheted off of her head at like a million miles an hour.

Ditto for her scissor kick off the corner.


In addition, she was seeing the field better than anyone on either team, transitioning like a champ, enforcing with a physical presence and making something out of nothing everywhere on the field. It was impressive as hell. That said, she was really not playing the box-to-box role Vlatko intends for her and instead was approximating the 10 role she plays for Lyon. It’s thrilling to watch, but when play comes back around, it can catch the 6 on an island. I love how she’s generating scoring chances, but part of the ideal role for her position is to quarterback a bit more than she was able to. Despite my gushing, it was an odd thing to see her wearing the captain’s armband over the likes of Alex Morgan and Meghan Rapinoe and it makes me wonder what’s actually going on in that locker room.

Rose Lavelle also played great. I’ve been writing for years that Rose Lavelle has a specific set of traits that no one else in the whole world has, and if she could keep her bones and ligaments and joints undamaged for long enough, she has the ability to do things no other player on the planet can do. No one accelerates in short space, carries through defenders, feathers perfect touch passes and has a thunderbolt shot like Rose Lavelle. No one can go from a nothing play in their own side of the field to magically, seconds later, being in scoring position right outside the box without ever passing the ball the way Rose can. And no one has the combination of all of that and sweet feet as well. Her nutmeg on the endline against Germany was a thing of beauty. Look at it. Holy cow.


There’s no doubt that the US still has work to do, and they’re currently a long way away from the type of dominance they exhibited during the Jill Ellis era, but the thing no other team in the world has is the sheer individual brilliance of the US players. Every one of them is a phenom. If you think of the worst US player: go ahead, do it right now. Who would you say is the current “worst” player on the USWNT? Got it? Okay. Now realize that whomever you chose would be a guaranteed starter in every other country in the world. If we made a B team with the players who couldn’t crack the starting roster, it would be the second-best team in the world.

Now, I’m not saying that means we’ll coast to victory in the next World Cup. It just means that against Germany, you could see how under duress the Germans were. You could see how wave-after-wave of unrelenting pressure from the US made the German side have to play perfectly to win. Win they did, but they very clearly were not the better side on the field yesterday. The much-maligned 4-3-3 that Vlatko is determined to stick with was decidedly not the glaring issue yesterday that it had been in past matches and in fact kept steady pressure on the German side for much of the game. That said, you have to fault Vlatko for not moving to a double pivot based on the players he has. At some point it makes sense to give the 4-2-3-1 a try and see if it pays off.

There’s still a big question around the 6 and Vlatko hoping that Sam Coffey will fit there doesn’t seem to be the answer (although you can’t knock her hustle or agility). Even Andi Sullivan is having trouble with it, often appearing to get outworked, and it forces the whole back line to go into panic mode. Perhaps most worrisome is Alana Cook. I’m a huge fan of hers but sometimes it feels like she keeps getting beat at key moments in international games, and opponents are very likely to notice that as well.

In the attacking third, yes, Alex Morgan scored, but it was on an individual effort to pick the pocket of the German player. Outside of that, you get the sense that the current style of attack doesn’t feature her nearly enough.

When you have the best players in the world who are clearly dominating play and still they come away with a loss, the natural question is to ask if the problem is the coaching and the scheme, not the players.

With all that considered the question is: will the US finally get it together and combine their natural skill with tactical discipline and the type of press that Vlatko seems hell-bent on implementing? Will this team of newcomers and vets finally coalesce into the type of formidable unit we expect them to be or will they remain fractured into various camps with differing styles of play?

We’ll know much more about the toughness and skill of this team after this weekend when they take on Germany again. Sunday at 5 pm EST at Red Bull Arena in New Jersey.


← The Indianapolis Colts Are Tanking | In a Nutshell, What Exactly Is 'Manifest' About? →