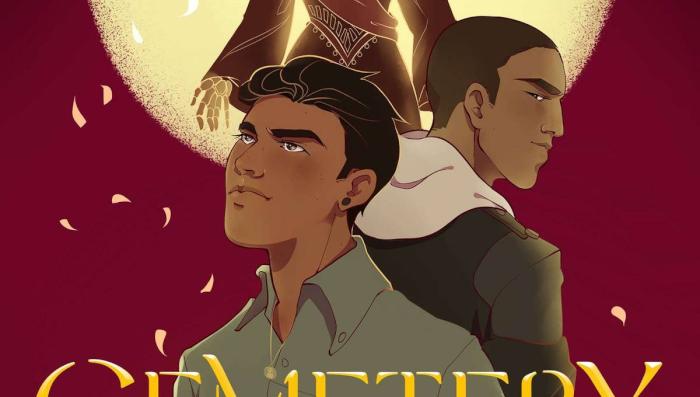 Book time! The nights are getting lighter, the vaccine letters are being sent out, and there are still so many books to be read, piling up next to my bed as if I didn’t buy an entire bookcase to put my TBR pile away neatly. Here are some of the reading highlights of the past month of my life! Please offer me all of your recommendations in the comments. Feed my habit.

the INCREDIBLY TALENTED Myriam Strasbourg (@/peaches.obviously on ig) made this BEAUTIFUL ART of Yadriel and Julian of ✨that scene✨ and you can purchase it on her etsy site! 😍😍😍

Believe the hype. Aiden Thomas’s Cemetery Boys was easily one of the most anticipated YA novels of 2020, and it more than deserved its lofty headlines. Yadriel is a young Latino trans boy who is determined to take up his mantle as the next generation of his family’s magic. As brujx, the men can raise the spirits and send them to their final resting place while the women can heal the sick and injured. Yet Yadriel’s family struggles to see past his gender, so he does what any inventive YA hero would do: he goes ahead and performs the ritual himself. And then he accidentally summons the spirit of a murdered classmate who didn’t know he was dead, and Julian, the deceased figure in question, won’t let Yadriel put him to rest until he figures out what happened to him. Cemetery Boys may feel structurally similar to a lot of the YA world’s paranormal adventure tales, but it’s vibrantly and emotionally its own thing in every other way. It’s culturally specific and devoid of pandering to the white gaze, romantically tender, emotionally forceful, and striking as an examination of the inevitability of grief. And yes, it made me cry.

I was gonna come up with a clever tweet to go with this photo but honestly what could I possibly do to improve upon it? Preorder UPRIGHT WOMEN WANTED to make tinkerbell wag:https://t.co/pJF2h2DI47 pic.twitter.com/OEOtYB851n


After witnessing the public hanging of her secret lover, Esther Augustus runs away to join the Librarians in the hope that she can dedicate herself to a life of good behavior among the ‘chaste, morally upright women’ supposedly working to rid the world of wrongness. Perhaps fortunately for her, the Librarians aren’t chaste, they don’t play by the rules, and they’re working towards spreading rebellion across the dry flatlands of a near-future American plains ravaged by fascism. Sarah Gailey’s inventive novella is part dystopian, part neo-Western, part queer feminist adventure, with a dash of romance. Like any great Old West tale, there’s horse riding and gunslinging and a healthy disregard for the crooked law. Tor’s novellas are a reliable source of quick reads that are jam-packed with thematic and creative ingenuity, and Upright Women Wanted is no exception.

The Deep by Alma Katsu

"It's a haunted house story but the house is the Titanic."

It’s a haunted house story but the house is the Titanic. Are you interested? Alma Katsu is a horror writer who comes recommended by none other than Stephen King, the almighty pope of the genre. Annie Hebbley is an Irish maid who survived the infamous sinking of the RMS Titanic, only to find herself back on the open waters as a nurse serving aboard its sister ship, the Britannic. A chance encounter with a fellow Titanic survivor who she had a strange companionship with is a potent reminder of the demons of her past, and the strange otherworldly force that seemed to plague that legendary ship on its maiden voyage. Katsu’s work is languid in pacing, which may prove irritating to readers looking for something more propulsive. Really, the horror aspects feel secondary to the class dynamics and hypocrisies of the passengers aboard this mighty ship, all of which Katsu develops with a scathing eye.

It’ll come as no surprise to anyone with an ear close to the ground in the YA world that Tiffany D. Jackson is a startling talent, but her latest novel, Grown, takes things to a new level. Enchanted Jones has woken up in a pool of blood with the corpse of beloved singer Korey Fields at her feet. She has no memory of the previous night and a murder charge on her head, but how did she get there? Enchanted’s story is a painfully familiar one: a young Black girl with musical ambitions who is ensnared by a major singer who promises her the world but soon turns her dreams into a horrific nightmare. The parallels with R. Kelly are evident, but there’s nothing tawdry or exploitative about what Jackson does here. She deftly navigates this intensely tricky story of the Catch-22 situation that young Black girls constantly find themselves in, and how their trauma is either ignored by the masses or used as a battering ram to further silence them. She teases out not only how a young girl could find herself in this heinous situation but how the entire societal structure surrounding her would allow it to happen. Obviously, this is not an easy read, but it reveals Jackson to be a YA author at the peak of her powers, and she threads this fine needle with such skill.


One of my all-time favorite romance novels of the past decade is Ayesha at Last, the debut novel of Canadian writer Uzma Jalaluddin. That book reimagined Pride & Prejudice from the perspective of a Muslim-Canadian woman living in Toronto and made the oversaturated subgenre of Austen retellings feel vibrant once more. Now, she’s paying homage to You’ve Got Mail with Hana Khan Carries On. The eponymous heroine is a radio nerd with an anonymous podcast where she vents her problems to the world, or at least one avid listener. He’s a welcome distraction from the problems caused by her family’s struggling restaurant, the microaggressions she faces at her radio internship, and the cocky new guy on the block whose ambitious plans for a new eatery may put her family out of business. Of course, you don’t need to be a romance novel PhD to know that this man, Aydin Shah, is not the stranger she believes him to be. Jalaluddin’s work is so effortlessly charming yet deceptively layered in its thematic heft. Hana is constantly battling other people’s expectations, whether it’s her family’s concerns for her future or the radio station she interns at constantly trying to get her to do stereotyping race-baiting stories on Islam. As with Ayesha at Last, the author has a real knack for sketching out multi-generational family dynamics as well as that of Hana’s wider community and the bigotry it faces in 21st century Canada. If you thought a romance couldn’t be sparky, irresistible, and wholly romantic without a single kiss, think again!

Hana Khan Carries On will be released on April 6th. I received an ARC from the publisher.

Don’t Call it a Cult: The Shocking Story of Keith Raniere and the Women of NXIVM by Sarah Berman

my book DON'T CALL IT A CULT has a cover!

you can preorder through @massybooks in vancouver, or wherever else you get books: https://t.co/Zbyr0jUe9E pic.twitter.com/iC3gBwweJK

Among the true crime stories of the past decade, the fascinating and occasionally bonkers tale of NXIVM, the multi-level marketing lifestyle guru brand turned skin-branding sex-cult has gobbled up a lot of real estate. There are multiple documentaries, podcasts, books, and Reddit forums dedicated to dissecting every minute aspect of this story. Is there anything left to talk about? Well, it turns out that the answer is yes. Actually, there’s a lot of this investigation that has been shoved aside in favor of more palatable (and ridicule-filled) narratives. Canadian journalist Sarah Berman offers what may be the definitive study of NXIVM with Don’t Call It a Cult. She fills in a lot of gaps, particularly pertaining to the human trafficking that imprisonment that occurred under the rule of Raniere and NXIVM’s tangled leadership. There’s a thoroughness here that feels depressingly necessary given how many of the lurid reports on this case obsessively focused on the easy-to-mock aspects of this truly despicable enterprise.

Don’t Call It a Cult will be released on April 20th. I received an ARC from the publisher.

A most anticipated fantasy novel, that New York Times bestselling author, Adalyn Grace calls “enchanting, lush, and decadent.” 🖤 SING ME FORGOTTEN is not only a magical feminist retelling of The Phantom of the Opera, but an exploration of gender and beauty pic.twitter.com/9CRm1s58Ag

I have made no secret of my unabashed fangirling love for all things The Phantom of the Opera. I even have an entire shelf in my house dedicated to my Phantom collection of books and DVDs (look, we all needed something to do during lockdown, don’t judge my late-night eBay anxiety bidding!) I practically squealed when I made a note last year of there being no fewer than FOUR YA Phantom retellings in the works with major publishers. This is the second I’ve read so far, and it’s my favorite of the bunch as things currently stand.

Isda has a remarkable gift: she is one of a select few who can manipulate memories when people sing. This, along with her marked face, makes her an outcast to society, so, like any good musical prodigy with no people skills, she takes to the rafters of the opera house to use her powers for good. Of course, there is a love interest with a beautiful voice. Of course, there is behind-the-scenes drama. Of course, not all is what it seems. I’ve read enough Phantom retellings to be familiar with the beats that these stories like to take. YA ones in particular tend to be creatively overstuffed and tonally messy, but so is Gaston Leroux’s book. Sing Me Forgotten happily leans into its melodramatic earnestness and takes itself very seriously. You’re either with it or you’re not. Olson also makes good use of music as a narrative and emotional tool in a way that a lot of retellings tend to avoid. I can’t fault the ambition here and I would certainly rather have a Phantom story with too many ideas than not enough. Mostly, I’m just delighted that the youths are coming back to this story (did you know the musical is 35 this year? Time makes fools of us all. Also, I was supposed to see the show on tour last year and I’m still mad that COVID ruined that for me.)

Sing Me Forgotten is available to buy now. I received an ARC from the publisher.


← Review: Gay Coming-of-Age Drama 'Moffie' Is An Epitaph, One Among Many, From The Tragedy Of Apartheid | Review: 'Thunder Force' Makes Superheroes Out of Melissa McCarthy and Octavia Spencer →