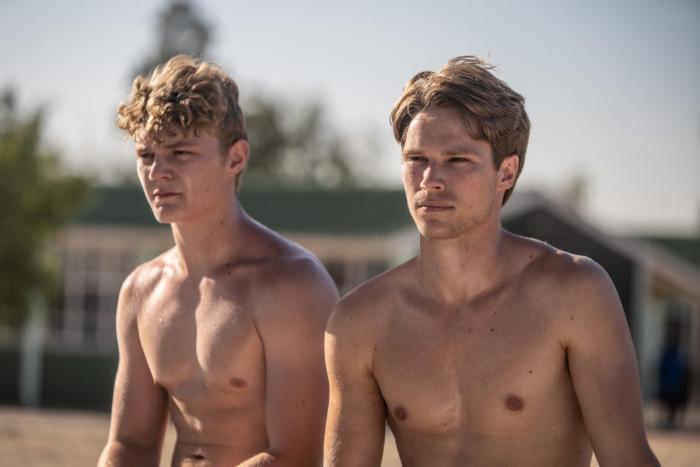 Review: Gay Coming-of-Age Drama 'Moffie' Is An Epitaph, One Among Many, From The Tragedy Of Apartheid

Apartheid, which was the official state-sanctioned policy of racial segregation in South Africa from 1948 through the mid-90s, literally translates to “aparthood” in Afrikaans—as in, “the state of being apart.” Existence in the place split down its own center. And that’s as good as any descriptor for the state of being at the turbulent heart of Moffie, writer-director Oliver Hermanus’ gorgeous and arrestingly sad gay coming-of-age drama, set near the tail-end of that period. A segregated self, unstitching at fresh seams—a society that tears you apart to make you back up in its own image is a doomed one, never fondly recalled. Heartbroken stories like Moffie are their only true remembrances, harsh scrawls written across history’s tombs.

Adapted from the memoir of novelist André-Carl van der Merwe, Moffie begins in 1981, a cruel whisper too early for true change. Television had only been allowed into the country five years earlier, lest the sinful indoctrinations of the British take hold. Two years later, people of color would finally get some limited representation in government, a small concession to the majority from the minority-rule that cracked the system open just a decade later. Still, 1981 might as well be 1961 for Nicholas van der Swart (Kai Luke Brümmer), a fresh-faced but terrified teenager who’s being sent off to do his two year stint of compulsory military service. We meet him in a daze, and it only gets worse from there.

As in the way of most military stories, the sergeants immediately terrorize their young charges. The cadets are starved, beaten, driven to the edge of physical collapse, and berated with dehumanizing obscenities. The worst of these would be the film’s title, a homophobic slur that separates the decent from the beasts. When asked why they’re there, the young men register indifference, shell-shocked from the start—who knows? They started drinking on the train-ride to the barracks. There’s a heroin epidemic among them on the front-lines, and everybody’s talking about feeling nothing, time and time again. Even worse though is the unspoken, not “who knows why they’re there” but “who even cares.” A system existing in a vacuum will crumble the second outside air gets in, and this place is pre-desiccated, just waiting for the shove.

Masculinity in itself doesn’t have to be a prison, but the toxic sort that was foundational to this (and every) white supremacist society eats itself from within; even the cogs that adjust best to the machinery do so with a widening dullness to their eyes. This sort of system has no place for individuals or the quirks of full personhood. So, we watch these two years carve the jagged edges off every boy, pooping out meat-cubes on its far end. All the better to not question, march in lock-step, beat generation after generation down into depressed submission, hating anything not so square its edges won’t reject mere touch with aggression, violence.

Violence is the order of the day, both physical and mental. Moffie takes place in an endless series of public private spaces: changing rooms, the barracks, the toilets, where everybody individually sits in their locked boxes, jerking off or puking. Early in the film two boys find something else to do in there, not so alone, and are summarily beaten with pillow-sacks of gun-parts for their repugnant behavior. There’s nothing pointed about that choice of a weapon. And when our boy Nicholas later finds a moment of tenderness with a fellow soldier of his own, it’s inside the trench they’ve just dug for themselves. Nothing pointed about a spark of love only finding its life inside a grave, for that matter.

Point being there is no place to hide, not really, especially not for people whose selfhood doesn’t fit into the pre-ordained molds. They stick out, all the better for succinct brutalization. What starts as an outward force quickly worms its way in. Before you know it, the boys are all dutifully beating the shit out of one another, because god forbid they kiss instead. Hermanus is ruthless in his depiction of this corrupting process, but somehow does so with a soft poetry. Humanity being steamrolled never looked so pretty. Dirty water, dead bodies in the grass, everything hangs here in a beautiful, terrible suspense. A collapsing star looks like rainbows right before it turns your eyes to ash.

Moffie comes to select theaters and On Demand on April 9.