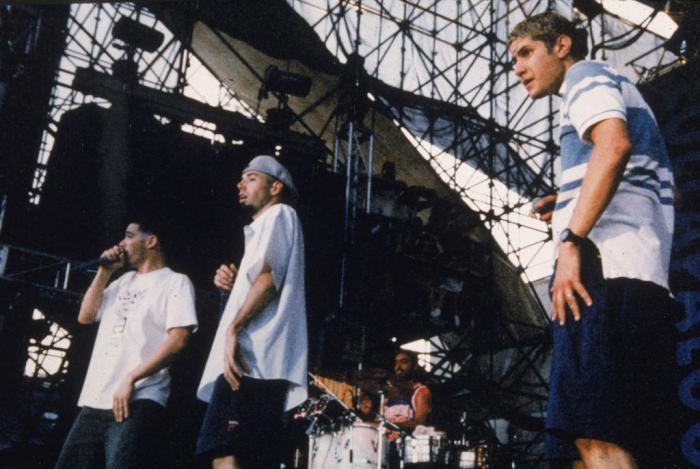 You know there are those live clips—those that you can’t help but just keep returning to again and again and again? I have a few. There’s that Judas Priest ‘Electric Eye’ video. There’s Stevie Wonder’s ‘Master Blaster’ performance. There’s Bob Dylan’s incredible amped-up version of ‘Shelter From the Storm’ from ‘Hard Rain’.

And there’s also this.

I imagine there’s not a soul here who hasn’t seen this, but I still have to gush about it.

Picture the scene: It’s 1994. You’re aware of the Beastie Boys. You might even be a big fan. The restlessly creative group has been around for 8 years already—and a busy 8 years it has been. Their debut album, 1986’s ‘Licensed To Ill’ had been the first rap record to land at the top spot of the Billboard 200 chart [it’s an album I’m not a huge fan of personally, both sonically and for the primordial frat-boy-parody/pandering Beastie Boys iteration that it represents; and there’s a whole separate discussion to be had about why this particular hip hop record by this particular group would have been the first to hit the charts that way; but nevertheless, its impact is undeniable]. The Boys shook things up immediately following that, shedding their early preoccupations and heading off into far more interesting and daring territory with the pioneering, sample-based ‘Paul’s Boutique’ in 1989—an album that was a commercial failure at the time but which has since rightfully been re-appraised as one of the greatest hip hop records of all time. Burning things down and rising from the ashes in a new form yet again, the Beastie Boys returned 3 years later with ‘Check Your Head’, an album featuring a hybrid approach: Woven into its structure alongside the scaled-back use of sampling was (as hinted at by its cover) a recorded instrumental skeleton laid down by the three members themselves. Here were the Boys, reaching back into their earliest days as a hardcore punk band and bringing elements of that into the present, to mix it with what they had learned in the intervening years.

And then, like we’ve said, it’s 1994. And maybe you’re a Beastie Boys fan, or maybe you’re not. Either way, the group is not, by any means, a new or unknown entity. They have proven themselves time and time again. And then May 3rd comes around, and the Boys release ‘Ill Communication’. And one day around then you’re sat at home, getting ready to watch Letterman. Hell, maybe you’ve even bagged yourself a ticket to the show, and you’re in the crowd. And then Letterman introduces that day’s musical guest, and it’s the Beastie Boys.

And they go ahead and fuc*ing do this:

Here’s the thing. Sometimes it’s easy to forget how great a song ‘Sabotage’ is. Through painful overuse by unimaginative film and TV directors, ‘Sabotage’ has been sanded down, its glow dulled. I think this is why I can’t help but keep coming back to this incredible performance: It makes ‘Sabotage’ sound as vital and as mind-blowing as it did the first time I ever heard it.

It’s the way one of the coolest motherfuc*ers to ever live, MCA, introduces things with that iconic bass riff, his hat pulled low over his eyes.

It’s the way Mike D absolutely smashes the ever-loving sh*t out of those drums, pounding out those double hits at the start as if sounding a warning of an imminent apocalypse.

And it’s the way the King Ad-Rock then steps up, battering the hardest working chord in popular music, and bringing the apocalypse with that howl and a smirk on his face that hammers home a fundamental truth: These are musicians operating at the very peak of their considerable powers, and having the absolutely best possible time doing it. How a bunch of people can look so laid back while whipping up a hurricane is beyond me. The energy of this clip is off the charts. Find a way to hook it up to the power grid and we’re halfway to bankrupting the fossil fuel giants. It’s a blessing we don’t see a shot of the Letterman crowd at the end, because the sight of a few hundred people ripped into constituent molecules by the sheer power generated by that performance would probably be a bit too gruesome. (Special shout-out too to Money Mark and DJ Hurricane who soar right alongside the Boys.)

You know what doesn’t make any damn sense at all?

It’s 2022. This year in May it will be 10 bloody years since the one and only Adam Yauch passed. I’d say I’ll be blasting this clip on the day to remember him, but then I remember him most days, just like I blast this clip.