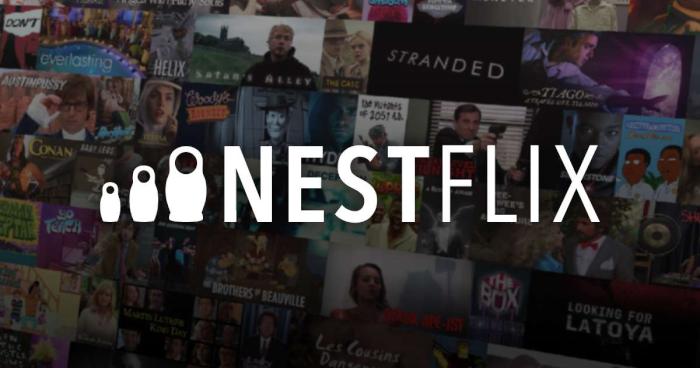 Apparently, we are still not done with the barrage of streaming services, which seem to come up at the same rate Netflix churns out content. It feels like that episode from Unbreakable Kimmy Schmidt where Titus, to impress his ex-boyfriend, pretends he is the star on a streamer series, confident that nobody would check up on that.

The newest shooting star is called Nestflix, as in Nest+flix, and no, they’re not owned by Nestlé and no, they haven’t been served with a cease & desist from Netflix. So far. I doubt they care because, in terms of quality, the former is not a threat to the latter anytime soon. Because the library in this one is insane: Browsing through Nestflix feels like entering a parallel dimension, where everything is a lot like Hollywood, but a little bit off, as if the entire industry had a secret division for mockbusters and spoofs … but with the actual stars. Up next is a sample of what I watched in my seven-day free trial.

Oh, and be warned, for some reason, I couldn’t find any of these titles on IMDB.

The first thing you notice is that there is a cornucopia of animation. You can find animated titles in pretty much every single category, and I mean every. single. one: game shows, documentaries and even talk shows!

I have to commend Nestflix on this front. Finally, somebody in Hollywood took Brad Bird’s famous quote to heart, about animation being a medium not a genre. They’re pushing the limits of what can be done with animation here, and mostly hand-drawn! My only nitpick? They default to three or four styles of animation in the mold of The Simpsons, Family Guy or Adult Swim stuff. I guess it’s the only way they can manage the volume they need to put out. My absolute favorite was BBC 4 gem Condensation, an introspective, almost lyrical portrayal of lower-upper-middle class Britannia. Mike Leigh would be proud.

Another great find were the Cosmic Wars movies. Unfortunately, I could only find three titles, because, typical of streamers in Latin American markets, you can never find the entire collection of a franchise. It’s always the weaker installments.

The best one, though loathed in fan forums, is The Gathering Shadow, which is basically a political drama IN SPACE. Highly recommended for fans of The West Wing and Borgen.

Nevertheless, there’s a lot of sh*te. In fact, I would say there’s more utter sh*t than mediocre stuff. Case in point: Johnny’s Bananas, one of those fish-out-water by way of parodying Middle America comedies. They tried to do Rocko’s Modern Life but this is more … Drawn Together.

That’s when I realized there were a lot of projects starring or directed by the Chase brothers: Vincent and Johnny. The former is completely devoid of talent and charisma, while the latter is like a budget Vince Vaughn. Also, Vincent Chase — though he is of Chilean descent — barely speaks Spanish. That didn’t stop him from portraying Pablo Escobar in the terrible Medellín. In Spanish. With a thick New Yorker accent. Then again, the exact same thing didn’t stop the producers of Narcos.

To my surprise, I discovered Vincent starred in an Aquaman movie. And then my jaw fell to the floor when I realized it was directed by motherfreakin’ James Cameron!

This is an actual, $200-million dollar James Cameron movie! And it is his; it has all his trademarks: Careful shooting and editing, realistic visual effects, paper-thin characters, and glorious spectacle, making you ignore the flaws while you’re watching it.

By then, I grew increasingly baffled and suspicious. If there’s one thing I can rely on, it is my encyclopedic knowledge of movie information; not trivia, the metadata. Had someone traveled to the past and changed everything? Why can’t I find a single piece of information on IMDB about these titles, actors, or directors? Was there some sort of time-space continuum lag between my timeline and the new one?

Then I realized, no… this is an actual streaming service for what has to be an actual, black-ops, phantom Hollywood. I count billions of dollars having been poured into this, since at least the 30s! (did you know Angels With Filthy Souls is an actual movie? I thought it was a parody of noirs made for Home Alone). You can find major stars attached to these. Some are credited with their actual names, like in Schwarzenegger’s Hamlet (a Bergmanian masterpiece). Others go by a stage name, like this “Lucas Lee” film collection. That guy is clearly Chris Evans.

But who could possibly be behind all this? Is all that “Hollywood accounting” money being redirected here? Is this where drug cartels launder money? As I mentioned before, this looks and feels like Hollywood, but as a parody of itself, or about how to conceive foreign film and TV cultures.

At times, it is insightful, either as a nuanced or a vicious commentary. Most times, it’s broad. Sometimes, you can barely tell them apart, like with these movies Adam Sandler made under a pseudonym.

Nestflix is addictive. But it does give you the feeling of an SNL sketch that went on for too long, Night at the Roxbury style. I would only recommend it if you are a super fan of B movies.

Also, the site is plagued with reliability issues. For starters, I could only get it to play when I was high on shrooms, which have always given me heightened brain skills: Is the Wi-Fi wobbly? Do you have to organize boxes full of files? Give me an afternoon and I’ll turn it into a library. Have I been looking at a blank page for hours? I’ll draw three articles in a day; Do you need me to convince a turtle to vote for Biden? I’ll turn him into a reluctant Bernie Bro in an hour. But once I come down from them, I end up like a reverse Bruce Banner. At times, it’s useless trying to get this damn site to run a video. I tried googling the titles so I can find a direct link, but I only found YouTube clips and trailers. I did discover this amazing documentary called 30 Rock, showing behind-the-scenes footage for several of these titles. By the way, how is MILF Island legal? I had to stop watching halfway through. I hope I don’t end up in an FBI watchlist.

So overall, that’s a pass for me. You can fit all the good stuff in the free trial. Now, if you excuse me, I will be studying pop culture references. Both my bomber jacket and my t-shirt collection have insisted that I need to catch up on that.