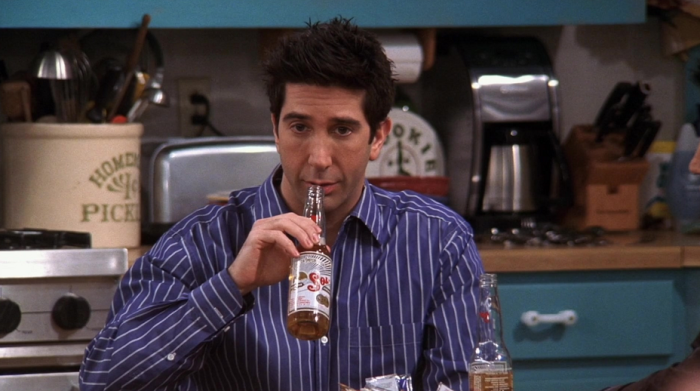 Ross From 'Friends' Really Did Become a Complete Sociopath

I must have said it a hundred times here, but I love Friends. Despite its issues, I can’t help but love it. It’s probably my number one comfort watch. When you just want to have something on in the background that you already know, that you’ll be able to say the joke out loud to yourself before it even comes, then Friends is the absolute tits. Or at least I should say: The first half or so of it is. Round about the time the group return from London from Ross and Emily’s ill-fated wedding, that’s when things start to rapidly turn from the absolute tits to going absolutely tits up. The characterisation starts to get all out of whack, with strong Flanderisation gradually taking hold; the writing gets less sharp and the plots more ridiculous; and everyone just gets far, far too orange. I think you can roughly map the quality level of the show onto decades. The fifth season of Friends ended on May 1999. Pretty quickly the show begins its decline there. The conclusion is inescapable: Friends belongs in the nineties, in the era of landlines and pastel-coloured windbreakers (truly it was a paradise we should have been more aware of), not in the time of mobile phones and Paris Hilton.

That’s not to say there aren’t good and even iconic moments present in the later seasons, but they are scattered relatively few and far between—especially compared to the rich well of quality that is the first half of the show. I still sometimes ride these latter parts out on my latest rewatch, but more often than not I just abruptly cut the flow, and loop right back round to Rachel arriving in Central Perk in her wedding dress. It’s nicer that way. Better. You’re spared the sight of—for example—Ross becoming an absolute sociopath. That particular instance of character dissolution is especially galling, as Ross is by some distance my favourite character on the show. Not in terms of behaviour—obviously, this is a TV show, not real life—but purely for how much he makes me laugh. David Schwimmer’s performance over those ten or so years that Friends was on air is a masterclass in physical comedy. Nobody else there comes close to the levels of slapstick, reaction, and pratfall that he does over and over again. Even in those later seasons, as the writers turned Ross into a complete maniac, Schwimmer gives it absolutely everything, often succeeding at providing moments of hilarity where there otherwise wouldn’t be any. Just look at the quality present in this clip—even though the majority of this compilation comes from the latter seasons, Schwimmer still delivers:

But here’s the funny turn around. Clips nudged just slightly out of context, that highlight just what a ridiculous trajectory the writers of Friends sent Ross on:


← Amber Ruffin And Jenny Hagel Expertly Mock Democrats' Response To 'Roe V. Wade' | 'This Is Us' Still Had At Least One Kick in the Teeth Left in the Tank →