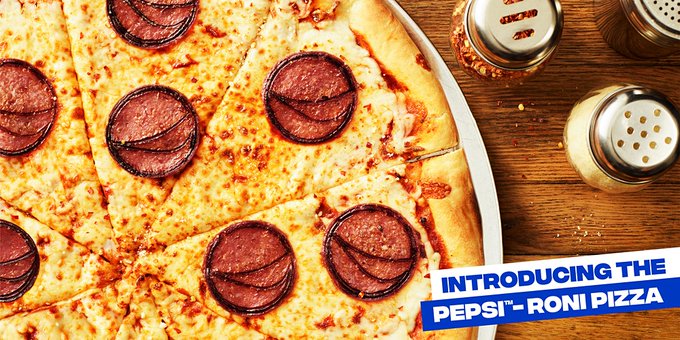 Pepsi-Roni Pizza Is A Thing That Is Happening

There are a lot of questionable toppings that can go on pizza. If we want to have a food fight, I’m on team Hawaiian Pizza FTW every time. There’s a pizza place in Chicago that makes a great clam and jalapeño white pizza, if you want to get weird with it. I don’t really understand this thing that Pepsi is doing though. I especially don’t understand them doing it in New York City. I SUPER especially don’t understand The Culinary Institute of America (CIA) getting involved with this unnecessary stunt topping business.

Nevertheless, on Friday the 20th, Made in New York Pizza in the West Village is hosting a tasting event for this ridiculousness.

According to the Eventbrite details in that Tweet, Friday is National Pizza Party Day (so that’s a thing.) To celebrate, Pepsi and the business heads at CIA Consulting think making a pepperoni product that tastes like Pepsi, and sports the Pepsi logo, is a good idea.

The unique topping recipe designed by Pepsi and CIA Consulting includes a Pepsi® Zero Sugar reduction instead of the water typically used in pepperoni preparation and layers the sweet and citrus zests Pepsi is known for with the standard spice blends found in pepperoni.

It’s not even the original formula Pepsi?!! This is why business people should never be in charge of flavor decisions.

If you’re in The Village this Friday, go get some, I guess? Or bring me a slice and I’ll try it (only because I’ll get paid to write about it, mind you.) If you have some sort of burning desire to try this marketing gimmick but aren’t in New York, don’t be sad! Pepsi promises that it’s coming soon to LA, Detroit, Miami, and Chicago.


← The Tables Have Turned: Twitter Has Elon Musk Over a Barrel | Fandom Was a Mistake →