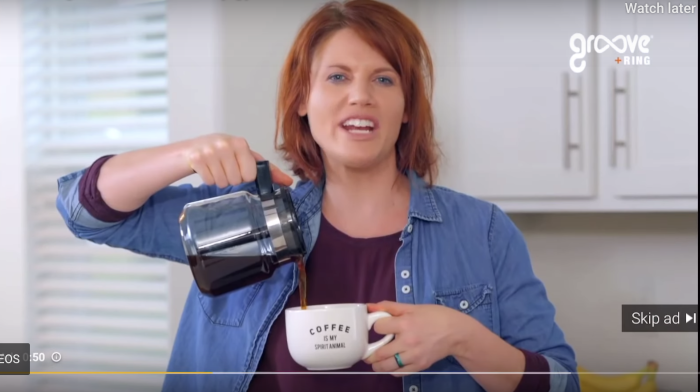 'Peloton Wife' Ain't Got Nothing on 'Groove Ring' Wife

The thing about the Peloton commercials is that it was all subtext: We made jokes about the Peloton Wife wanting to remove herself from her marriage based on the looks she gave. There’s nothing implied, however, about Groove Ring wife’s insane jealousy. It’s right there in the ad, which keeps popping up as a pre-roll commercial on YouTube. To its credit, I never skip it. I can’t stop watching.

I haven’t removed my wedding ring since my wedding day — at this point, it’s basically grafted into my skin. I’ve never had any problems with “breathability” or “sweating” because it’s a wedding ring and not a f**king scarf I’m wearing to the goddamn gym.

However, some men do remove their wedding rings when they’re working out — cool, cool, cool, whatever — and the lack of a wedding ring plus the grunts one makes while lifting weights is apparently some sort of mating call, which I didn’t realize until I saw this commercial. For about $30, you can buy a silicone ring that is breathable and doesn’t sweat, and more importantly, if you put one on your man, rando women will magically stop f**king him
at the gym.

You can do better than placid gym husband, Groove Ring Wife! If your husband needs a rubber ring around his finger to keep himself from cheating, maybe save your money on shitty rings and find yourself another husband.

← 'Non-Americans of Reddit, What is the Weirdest Thing About America That Americans Don't Realise?' | The Best Unreleased Festival Favorite Movies of 2019 →