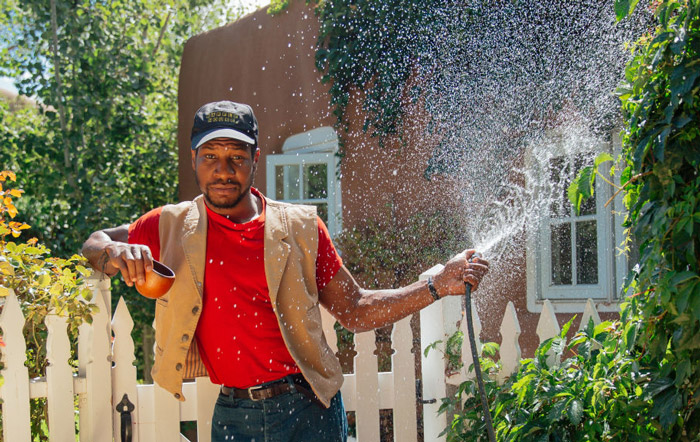 Pajiba 10 For Your Consideration: Jonathan Majors

Have you ever been so convinced by a movie character that the revelation that it’s actually an actor playing a character causes all of the hairs on your body to stand on end? I don’t mean that you’ve disassociated from reality or anything (not that there’s anything wrong with that!)—just that the actor’s so good you forget there’s acting happening at all. This happens on happy occasion with an established movie star but it’s more likely to come with a newcomer who’s not lugging their past baggage onto the screen. In 2019 exactly that happened to me with one Montgomery Allen, the old-timey-suit-wearing, sketchbook-carrying, cool-as-a-cucumber cat hopping on the back of a skateboard with his best bud Jimmie in Joe Talbot’s already timeless masterpiece, The Last Black Man in San Francisco.

The credits might have said that an actor named Jonathan Majors was playing Montgomery, but Montgomery was Montgomery; Montgomery remains Montgomery to this day. Acting is a witchcraft I never want to fully understand, one that raises spirits out of thin air and animates nothing into something more than something. Not just matter, but life, emotion, art. More than human. Meaning and truth. I don’t believe in god or religion but I believe in actors, in the alchemy of good acting, and going to the movies (oh how I miss it!) can spin some hallelujahs out of every sinner and every saint.

I can watch the first five minutes of The Last Black Man in San Francisco at any point in any day and just immediately start crying, even after having watched the film now a good dozen times over the past two years. Montgomery will tilt his head just so to look over at Jimmie, Montgomery will smile a nearly imperceptible smile, and wham, as those faultless horns of composer Emile Mosseri kick in (soundtrack of the decade, this one) their friendship will blast through me like I actually lived through it myself. A movie, a lifetime, spinning in one glance. Witchcraft, man.

So that was 2019. Then 2020 came along (did it ever) and suddenly an actor named Jonathan Majors started popping up in things. He had a brief role as a suave small-town criminal in Jungleland, where his smoothness, his clean suits and resigned attitude, threw him into sharp contrast against the low-down dirty and desperate boxing brothers (Charlie Hunnam and Jack O’Connell) he was intimidating into a bad deal. His stillness elicited that contrast.

Then, there was a much bigger role in Spike Lee’s Vietnam War movie Da 5 Bloods, where he was tasked with holding his own opposite a larger-than-life screen-full of veterans—Acting Veterans playing War Veterans, that is. People like Delroy Lindo and Clarke Peters; people with faces we’ve watch solidify over the decades. Who’s this upstart with the broad shoulders and itty-bitty waist suddenly edging his way into the frame? Jonathan Majors, they say? Now, why does that name sound familiar?

Ok. I’m being facetious in order to build my case. I knew well enough Jonathan Majors was a person immediately following Last Black Man. I’d looked him up and everything. But I had no concept of him beyond my beloved Montgomery, and 2020 became my big lesson. Especially once his biggest role to date strutted into town swinging a bad-ass baseball bat with his lead role in HBO’s horror series Lovecraft Country, premiering in August. Telling the tale of the Chicago kids Atticus Freeman (Majors) and Leti Lewis (an equally charismatic turn from Jurnee Smollett) fighting monsters and dark wizards down in the Jim Crow South, what Lovecraft Country often lacked in sensible storytelling it more than made up with star-power, giving us one of if not the most gorgeous on-screen couples of the year. Majors and Smollett were sparks.

Talent is hot, but turns out that body is hotter. Shiny prizes and festive balloons to the entire costume-design team on Lovecraft, which turned the show about scary tentacled monsters into a spectacle of Majors busting out of his midcentury polos and slacks. Nobody but no body looked better this year, and that’s before you even get into all of the excuses the writers found for Atticus Freeman to strip down out of those costumes. Looking back at the bulky suits Majors wore in Last Black Man it still awes me to discover all of what Montgomery must have had going on under there. That might not be the soul of acting, but it’s the biceps for sure. Jonathan Majors is bringing it all.

← Twitter Users Share The Worst Food They Have Gotten At a Football Match | A Final Goodbye To The Best Live Action, Hard-R, Sci-Fi Comedy Series Ever →