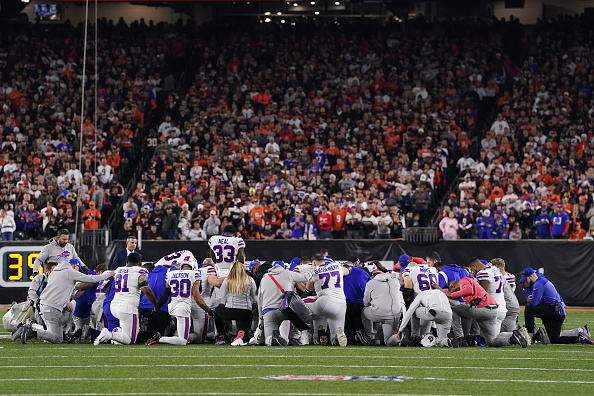 There’s a recurring motif in literature, movies, and television after someone dies, and it’s the expression of disbelief from the POV character because the world does not stop after a loved one passes. It’s a recurring motif because it’s grounded in reality: How many times have we felt similarly after a tragedy? A parent, a spouse, or a close friend dies, and we find ourselves dumbstruck by the idea that people are still going to the grocery store, they are still going to work, eating frozen dinners, and nodding off in their chairs during the local newscasts. How dare they, when someone we love is no longer of this world!

Last night, during a game between the Buffalo Bills and the Cincinnati Bengals, a 24-year-old player for the Bills named Damar Hamlin went into cardiac arrest after tackling wide receiver Tee Higgins. He stood up, and then Hamlin collapsed. It was a terrifying sight, and the ESPN broadcast reran it too many times before they realized the severity of Hamlin’s condition. An ambulance was brought onto the field. They gave Hamlin CPR for nine minutes and used a defibrillator to get his heart going again. It was scary. Players on the sideline were praying. Some were weeping. Players from both teams formed a human wall around Hamlin so that cameras and spectators could not witness the moment. I genuinely thought he had died. He’s currently hospitalized, intubated, and in critical condition. His prognosis is unknown.

The NFL will have to answer for some mistakes that it made because it didn’t suspend the game more quickly. There will be another round of news cycles about the dangers of football. Newscasts will revisit moments in the past from NFL and other sports where players have died. There will be handwringing. The nutjobs will blame it on COVID vaccines (in fact, they’re already out in full force on social media; this horrifying tweet is the first that comes up for me under “Damar Hamlin” on Twitter, a MAGA moron showing a montage of players collapsing and blaming it on COVID vaccines).

But last night, around 8:55, the world stopped for Damar Hamlin. Not the whole world, mind you. But the 70,000 people in that stadium, and the millions of people who tuned in to watch the most anticipated Monday Night Football game of the season. We all just … stopped. We sat through numerous commercial breaks because Troy Aikman didn’t know what the hell to say. We watched sportscasters barely hold their sh*t together while discussing the tragedy. For a couple of hours anyway, it felt like a not insignificant percentage of this nation had stopped what they were doing to pray for and consider the fate of a man most of them had never heard of prior to the events of last night. The world has also contributed $3.5 million (and counting) to a toy drive that Hamlin set up a couple of years ago as a college player. The goal was $2,500.

The world stopped, and then the world did what it could to make humanity a little bit better in honor of Damar Hamlin. The game — and the millions of dollars in revenue that accrues from it — was postponed. They may never play it. It may have taken the NFL too long to make that call, but consider the fact that when a roofer falls off a roof and dies, the world does not stop. When a fisherman falls into the ocean and drowns, the world does not stop. Loggers, garbage collectors, farmers, and even crossing guards die at an alarming rate every year, and the world does not stop for them. No one raises $3.5 million for a toy drive in honor of the highway maintenance worker earning minimum wage who is run over on the freeway by someone checking their phone.

But the world stopped for Damar Hamlin. That may say something about our priorities in America, but I still found it remarkable that the nationally televised cardiac arrest of one 24-year-old man managed to bring so much of the world together to honor a man we do not know and express incredible empathy for a family we have never met. It was a horrible moment, but — with the exception of those anti-vaxxers — it brought out the best in a whole lot of people.

We hope for Hamlin’s speedy recovery.


← What Happened With Jeremy Renner and a Snow Plow? | A Foolproof Way to Determine Whether a New Netflix Series Will Be Canceled →