So I don’t know if you guys know about the subreddit ‘Am I The Asshole?’ (‘AITA’). It’s a funny place. In essence, users come and submit (often recent) personal anecdotes that feature them behaving in controversial ways, after which they follow up with the question, implied or explicit: ‘Help me out here. Am I the asshole in this? Or is the other person the asshole?’

The reasons they have for coming with their beseeching queries to the hive mind of Reddit vary. Maybe someone called them out on something. Maybe they’re sat in quiet contemplation after the fact, suddenly seeing their behaviour in a different light to how it appeared in the heat of the moment. Sometimes they are genuinely confused as to who was right and who was wrong. Often, they want validation.

The funniest or most egregious ones are the ones where someone tells a tale in which they behave like an absolute sewer troll, but you can tell from the way they tell the story that they are absolutely convinced that they are somehow the moral hero in that story. That they have behaved virtuously, or at worst, just somewhat oddly, and that some other person or people have reacted completely disproportionately. Sometimes the delusion is so formidable it beggars belief. Fuc*ers basically thinking they’re Keanu Reeves when in reality they’re actually Donald Trump Jr. Like, it genuinely borders on the cartoonish sometimes.

I never know how much to tip in restaurants. I find it really awkward to assign a monetary value to a service provided by a human being as I don’t believe the two should be related. So nine times out of ten instead of spending ages trying to figure out how much to tip I just don’t tip anything. My wife doesn’t like to eat out with me because of that and we always fight over the issue. On the occasion that we do eat out together she ends up leaving a tip and it always makes me feel awkward so I get angry at her. AITA?

I came home from the pub last night really needing a shit but the toilet had some un-flushed toilet paper in it. My wife forgets to flush the paper often after going number 1, no matter how many times I tell her that that’s not okay! I think that’s gross and I refuse to use a toilet someone hasn’t flushed so when I came home last night and saw the state of the toilet I got really angry and I took a shit in the toaster and now my wife is upset. AITA?

I tried to increase my revenue stream recently by constructing a giant sun-blocker into the mountain looming over the town I live in. I’d extracted all the wealth I possibly could with my nuclear power plant, the local school’s surprise oil well, and my (sadly) failed casino, so I thought that, well, if it was perpetual twilight then that’d be more electricity revenue for me. But then the whole town started yelling at me at a town hall meeting, despite all the jobs and the exotic three-eyed fish I provide! AITA?

So these people come and they tell their stories and they ask for judgement. Commenters then respond, and if they want their value judgement to be counted they add an acronym at the end of their comment like so:

And like my totally real and definitely not made up (okay fine I made them up but they are 100% representative of the kind of deluded nonsense that shows up there often) examples above made clear, the answer to a helluva lot of the posts in ‘Am I the Asshole?’ is: ‘Yes. Yes You are.’

Sometimes, though, the exact opposite is the case.

AITA for trying to contact my husband through the means that are available to me? from r/AmItheAsshole

Here’s a screencap just in case it disappears: 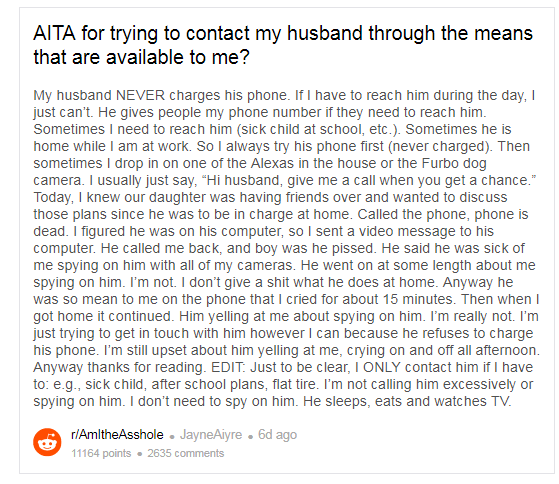 Here’s the thing. Personally, I don’t like mobile phones. Like, yes, they’re pretty incredible and useful for a number of reasons, of course. But it’s just amazing how we’ve all consented to carrying around this incredibly comprehensive little spy device that records our every move, logs what we’re thinking about via our search history, passes on our information to be sold to the highest bidder, and that could at any point be weaponized against us by an unscrupulous government. I know, not exactly the most original thought, but it just never ceases to amaze me how banal and normalized it has all become. The complete and total blanketing of our lives by an all-pervasive surveillance system, and our voluntary acceptance of it in exchange for the comfort of convenience. Like, it’s nuts. We get told horror stories about the wide-ranging and oppressive surveillance apparatus of the Stasi, and we flinch when we see dressed down, mustachioed KGB goons descend on virtuous scientists in Chernobyl, yet all of those agents and systems of the panopticon were just amateurs, drool-covered children playing in a sandpit, compared to the surveillance capitalism wet dream we’re all living in now. And that’s not even mentioning all the old man yells at cloud things it’s done to the social fabric.

ALL THAT BEING SAID,

‘My husband NEVER charges his phone.’

No no no. What kind of selfish man-baby is this.

‘If I have to reach him during the day, I just can’t.’

Fuck that noise. When you get married—shit, when you get into any kind of relationship—you enter into a contract. A consensual contract. If it’s an anti-mobile phone relationship in which both parties disdain the technology, then fine. But if one person wants to be able to communicate—for practical as well as emotional reasons—and the other just refuses be to reachable? Bollocks to that selfish controlling cockwomble behaviour.

‘He said he was sick of me spying on him with all of my cameras.’

‘Anyway he was so mean to me on the phone that I cried for about 15 minutes. Then when I got home it continued. Him yelling at me about spying on him.’

← Trailer Round Up: 'Jacob's Ladder,' Spies In Disguise' And 'Four Weddings and a Funeral' | When You Come at the Queen, Kellyanne Conway, You Best Not Miss →