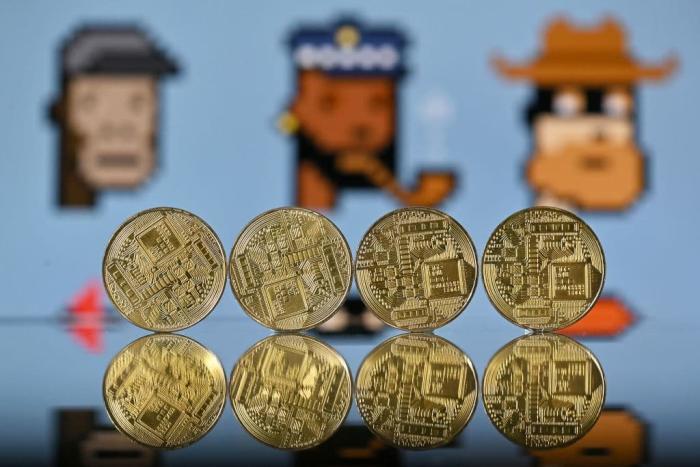 Last month, Jimmy Fallon and Paris Hilton showed off their NFTs on The Tonight Show and made an early case for the most awkward TV moment of 2022. The pair, both multi-millionaires, spent a few minutes revealing print-outs of low-quality images of apes in bad hats that they spent obscene amounts of money on. The audience reacted with tepid applause as Hilton explained why she picked her monkey over others, saying that she wanted ‘something that, like, kind of reminds me of me.’ Fallon showed his collection off, an image he purchased for a reported $216,000. If you’re able to make it through the entire clip without wincing or wondering what happened to this planet of ours then you are a stronger person than I am.

NFTs, or non-fungible tokens, are the most buzzed-about concept of the past few months. The latest advancement in crypto fever, NFTs are units of data stored on a blockchain that has become extremely popular in recent months with digital art. One online artist known as Beeple made history when an NFT of one of his works sold at auction for around $69 million, and soon the floodgates opened. There barely seems to be a day that passes without some sort of news announcement of a random celebrity making, selling, or buying an NFT of some kind. Twitter now offers a special way for NFT owners to show off their purchases as their profile images. If you’ve browsed social media recently then the chances are you’ve come across a lot of NFTs. The monkeys owned by Hilton and Fallon are part of the Bored Ape Yacht Club, an online club whose membership is dependent upon owning one of 10,000 unique ape avatars. The minimum cost of entry is 93 ether, a cost that can fluctuate but is often in the six figures.

If that’s out of your price range then perhaps you’d like a Cool Cat, or you can show your feminist cred with an NFT from the Fame Lady Squad. There are CryptoPunks and CryptoKitties, BYOPills and SupDucks. OpenSea, which describes itself as the largest NFT marketplace, has countless ongoing auctions for these avatars.

The issues of NFTs, from the environmental damage they cause to the copyright problems to the unreliability of the technology, have been extensively documented already so I won’t dig into that. I recommend Dan Olson’s comprehensive video essay for an explanation on that. Suffice to say I am not a fan of NFTs, especially in this current form that is overwhelmingly defined by shoddy economics, a total lack of transparency, and crypto-bro fandom. Today, however, my focus is on the NFTs themselves, this glut of artwork that has come to define what we think of when we think of this entire phenomenon.

Seriously, why is so much of it this effing hideous?

Bored Apes are ugly but this dumb smile is funny looking. I wonder how much this costs in $240,000 HOLY SHIT NO THANKS RIGHT CLICK SAVE AS pic.twitter.com/jDt4UXo6Ez

Look, I get it. Art is subjective. That’s what makes it so exciting, and I’m not sh*tting on anyone’s tastes here. I’m that person who loves experimental, boundary and form-pushing art that pisses off tabloid readers and inspires contemptuous comments like ‘my kid could do that!’ I’m extremely in favor of breaking down the stifling definitions of what is and isn’t art so that the conversation can be as wide-ranging and inclusive as possible. And, of course, not all NFTs are made the same. They are as varied as traditional art can but, but when we all think of NFTs, we think of crudely designed monkeys, bad 8-bit portraits, and South Park rejects.

Let’s be honest here. This isn’t really about the art. Maybe some of these millionaires are blowing six figures on these NFT caricatures because they’re super enthusiastic about this dive into post-modern animation or whatever but I don’t think they’re especially invested in its creative merit. It’s a symbol of exclusivity with a sheen of democratization barely concealing its true intentions. Procedurally generated images with little artistic merit and no real commercial value are heralded as guaranteed investments that everyone should buy into now, like Beanie Babies without the fun of having something cute on your shelf. The Bored Ape Club talks about wanting NFTs to represent their owner’s online identity, a slew of near-identical faces bound together by money. Some of the work is almost embarrassingly shoddy, such as the various animated series being created on the blockchain, all of which make early 2000s flash-art look like a Hayao Miyazaki production.

In a sense, it’s not that different from the traditional art world, a market of inflated prices, dodgy dealings, and billionaires who shore up priceless creations as collateral just in case the banks crash once more. At least that Picasso hanging over the toilet of the Eastern European oil baron of the week has history behind it, but the financial mechanics are the same. It’s hard to judge if any painting is actually ‘worth’ nine figures but pushing the prices up so far via faked demand helps to bolster those shaky foundations. It’s not unheard of for gallery owners to buy the works of artists they represent at sky-high costs to create the image that they’re ever-so-in-demand. NFTs seems to be following that path, albeit at a much speedier pace. If enough money is shelled out for a picture of a sad ape with a hat and laser eyes then surely that means it’s worth something, whatever something is, right?

The reality of this market is so transparently bullsh*t that I’m stunned by how much of it is unfolding without even the pretense of earnestness. Journalist Max Read noted in his newsletter that many of the major celebrities currently shilling NFTs are represented by the talent agency CAA, which ch is an investor in the NFT marketplace OpenSea, and which recently signed a deal to represent the NFT collector 0xb1, who owns NFTs from Bored Ape Yacht Club and World of Women. None of them seem to be disclaiming this connection, which may raise eyes with the FTC. Ryan Broderick has questioned if some of these celebrities are even putting down the crypto bucks themselves to buy the NFTs. On the same day that Brie Larson ‘revealed’ her NFT purchase, with Twitter reacting negatively, Eva Longoria, Reese Witherspoon, and Gwyneth Paltrow all got NFTs from the same collection and changed their profile pics within a few hours of one another. This one especially pisses me off because they’re trying to push it as some display of girlboss power for the ladies when it’s just another cavalcade of rich people shite.

Today Brie Larson, Eva Longoria, Reese Witherspoon, and Gwyneth Paltrow all got NFTs from the same collection and changed their profile pics within a few hours of one another. If these weren't wildly speculative digital assets and were just jpgs, it might be fine, but… pic.twitter.com/rcDbK1FzwB

This market will crash. The question is how much money will be lost and who will be hurt the most when it happens. I don’t think Reese Witherspoon or Justin Bieber will feel the pinch as much as their fans who they have tried to coax into this poorly drawn Ponzi scheme. I suppose it’s fitting that this fad is represented by art made with no real love or attention. It’s a warning sign. If it looks bad and everyone says it’s bad…

← Yes, Mr. Elwes. That Is The Face We Made On Seeing The Trailer For 'The Hyperions' | The Y.A. Adaptation 'The Sky Is Everywhere' Is A Lot Of Flower, Not Enough Power →