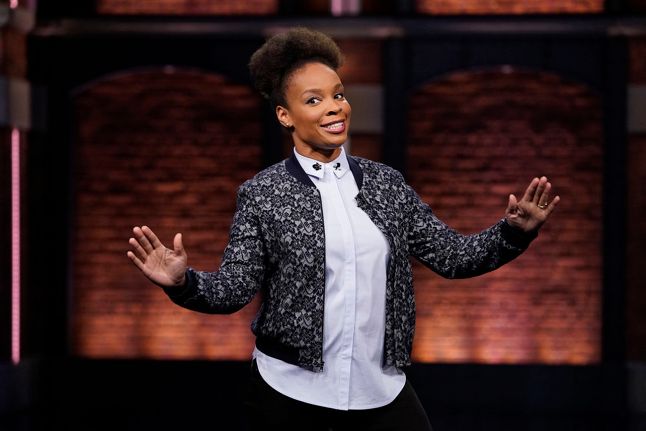 One Thousand Shows Ago, Amber Ruffin Graced Us With Her Presence

Late Night With Seth Meyers aired its one-thousandth show last night, and you guys know that I’m only here for Amber Ruffin. (A little bit I’m here to see if Seth ever wears a deep v-neck shirt, therefore, ruining me forever, but mostly it’s Amber Ruffin.) She was, as always, delightful.

And then she gets to talk about how she’s getting her own show! Which is amazing because there’s literally not a limit on how many things I would like to see Amber Ruffin in.

And not that I want her to go away from Late Night too much because I know that her voice has helped shape the show and how it discusses, among other things, race in a myriad of ways including Trump and his Confederacy bullshit.

But I do want her to get to do literally anything that she wants including continuing to wear ballgowns for every appearance.

Now this is usually the time in the post where I either get rage-y and start in on a rant about how everything is systemically bad and we need to completely overhaul what we as a society prioritize and how we’ve made those determinations or where I pick apart mostly unimportant details from TV shows and movies because there’s ice where my heart should be, but I can’t right now. Instead, I’m just going to be super grateful that Amber didn’t settle for “keeping her head down” at her job, and then I’m going to go rewatch my favorite “Amber Says What” where she talks about Serena Williams. Because I feel about Amber the way that Amber feels about Serena. I love her. I love her. I love her so bad.

← Oh Shut Up, Snowflakes: No One Is Coming for Your 'Paw Patrol' | Why Are People Fighting Over Christopher Columbus Statues? →